Scientists Seek to Harness the Power of Accelerators for Environmental Remediation 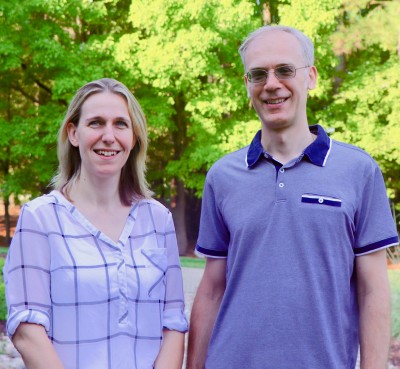 The word “particle accelerator” may bring to mind massive underground experiments at laboratories exploring the mysteries of the universe, but accelerators are also used behind the scenes in modern life, for instance, in oil exploration, in diagnosing and treating cancer, and in making food safe. Now, two accelerator scientists at the Department of Energy's Thomas Jefferson National Accelerator Facility have received funding from the DOE’s Accelerator Stewardship program managed by the Office of High Energy Physics in the Office of Science to explore whether accelerators may offer benefits in environmental remediation.

Newswise — The word “particle accelerator” may bring to mind massive underground experiments at laboratories exploring the mysteries of the universe, but accelerators are also used behind the scenes in modern life, for instance, in oil exploration, in diagnosing and treating cancer, and in making food safe. Now, two accelerator scientists at the Department of Energy's Thomas Jefferson National Accelerator Facility have received funding from the DOE’s Accelerator Stewardship program managed by the Office of High Energy Physics in the Office of Science to explore whether accelerators may offer benefits in environmental remediation.

Fay Hannon and Gianluigi “Gigi” Ciovati are among 13 scientists nationwide who have been awarded support from the Research Opportunities in Accelerator Stewardship program, through which the DOE supports efforts to transfer accelerator technology out of national labs and universities and into industrial and environmental applications. The DOE will fund the projects of these stewards of accelerator research for three years.

A New Way to Clean Water

Irradiating water with an accelerator’s electron beam is a proven safe way to remove contaminants. However, current accelerators are not a cost-effective or efficient method for large-scale industrial wastewater treatment.

“When I got the phone call that said I received the award, I was super excited,” Hannon said. “We do a lot of work at Jefferson Lab on fundamental physics, and for the general public, that’s quite abstract. But it feels good to win an award for something that could potentially make a tangible difference to people.”

For her project, titled “High efficiency, normal conducting LINAC for environmental water remediation,” Hannon will develop a concept for a linear accelerator, also known as a LINAC, that will be manufacturable. The basic setup is that water will flow through the accelerator’s electron beam, which will break up contaminants so that they can be easily removed, thereby cleaning the water for consumption or release into waterways. At less than two meters long, Hannon’s design is smaller than most accelerators at Jefferson Lab.

“It will be shorter than your average basketball player,” she said. In addition to being compact and easy to transport, Hannon’s accelerator design concept will be low energy and extremely efficient.

For this project, Hannon is partnering with Hampton Roads Sanitation District, who will act as a consultant. Accelerators have the potential to replace existing wastewater treatment methods, which can be chemically and energetically intensive. If Hannon successfully demonstrates the viability of her accelerator design concept, it could be further applied to the wastewater management industry.

Additionally, Hannon is partnering with a food pasteurization company called ScanTech Sciences, Inc., as her accelerator could potentially be used to sterilize liquid consumables the same way it cleans water. Beyond water and food, the accelerator may also be able to treat tar sands, hydraulic fracturing fluids, and other liquid industrial byproducts. In the future, she hopes to seek funding to build and test a prototype of her concept.

“I’m of a generation where environmental protection really weighs on your mind, and I think this topic of wastewater has really become more prominent in the last few years,” Hannon said.

Gigi Ciovati, an accelerator scientist with a joint appointment between Jefferson Lab and Old Dominion University, is also using his support from the DOE to design a low-cost, high-efficiency accelerator for environmental remediation applications, including cleaning wastewater and flue gases from power plants.

“This award is an important recognition of the work that we’ve been involved with and are interested in developing, and it feels very good to know that the DOE supports our effort,” Ciovati said. “I feel lucky that management, from the lab director to the division director to our department director, are all supportive of these activities. It shows commitment of the lab to develop these technologies.”

Ciovati began designing this accelerator three years ago with funding from DOE. With this awarded funding, he will demonstrate conduction cooling of a superconducting radiofrequency (SRF) cavity for an environmental accelerator with a powerful electron beam.

An SRF cavity accelerates electrons in the electron beam, but it needs extreme cold to operate. The standard way to cool SRF cavities to superconducting temperatures is with liquid helium, but using liquid helium requires costly, complicated and space-consuming infrastructure. All this infrastructure is currently too expensive to make accelerators with SRF cavities an attractive option outside the laboratory environment.

However, recent technological advances have made it possible to cool an SRF cavity without using liquid helium, such as the increased cooling power of commercially available cryocoolers, which are standalone.

“We saw the convergence of the different technologies as an opportunity to apply our technology to a more direct societal need,” Ciovati said. “We just saw these pieces of the puzzle and decided it was worth trying to put them together.”

For his project, titled “Design, prototype and testing of an SRF cavity for a low‐cost, compact accelerator for environmental application,” Ciovati will connect an SRF cavity to a commercially available cryocooler to conductively cool the cavity. This is an important step in designing a low-cost, high-efficiency accelerator that industry could use for environmental remediation applications. While he’s still years away from building an entire accelerator prototype, this cavity cooling method could enable the manufacture of an accelerator with significantly cheaper operating costs.

Like Hannon, Ciovati also partnered with industry. He’s been collaborating on the design with General Atomics, a research and technology development company, and he has also benefited from consulting with two engineers from the former Advanced Energy Systems.