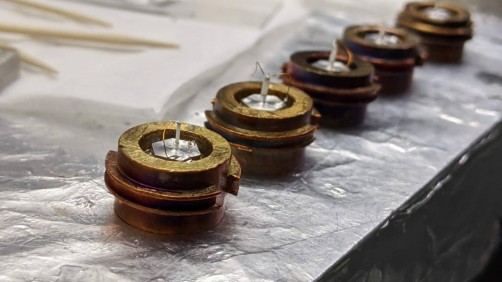 Image of doped CeCoIn5 samples resting on copper “puck” sample holders. (Each puck is approximately the size of a silver dollar.) The Berkeley Lab-led team used spectroscopic techniques at the Advanced Light Source to image the CeCoIn5 crystals’ electronic energy structure as a function of chemical composition.

Newswise — A research team has uncovered new clues into the exotic behavior of unconventional superconductors – devices that efficiently carry electrical current with zero resistance in ways that defy our previous understanding of physics.

"The hope is that our work may lead to a better understanding of superconductivity, which could find applications in next-gen energy storage, supercomputing, and magnetic levitating trains," said first author Nikola Maksimovic, a graduate student researcher in Berkeley Lab’s Materials Sciences Division and UC Berkeley’s Physics Department.

The work could also help researchers design more powerful superconducting materials by tuning their chemical makeup at the atomic level. The team, led by Lawrence Berkeley National Laboratory (Berkeley Lab) in collaboration with UC Berkeley, reported their findings in the journal Science.

For decades, researchers have struggled to understand how superconducting cuprates work, in part because cuprates are difficult to grow without defects. What’s more is their powerful superconductivity is challenging to switch off – like a race car that keeps on going, even when it’s in neutral. Scientists therefore need a tool to help them understand how superconductivity evolves from different phases at the atomic level, and which formulations have the most potential for real-world applications.

So for the current study, a research team led by James Analytis focused on a material made of cerium-cobalt-indium5 (CeCoIn5) that could mimic a cuprate system. Analytis is a faculty scientist and co-investigator in the Quantum Materials program in Berkeley Lab’s Materials Sciences Division, which provided the funding for this work. He is also a physics professor at UC Berkeley.

To some, CeCoIn5 might seem like an unlikely model to study superconducting cuprates. CeCoIn5 contains neither copper nor oxygen, after all. But despite their differences, cuprates and CeCoIn5 share some key traits: They are both unconventional superconductors with electron density or “spatial symmetry” patterns resembling a four-leaf clover. Such spatial symmetry is like a map highlighting which parts of the superconductor are most densely populated by electrons.

The team also knew from other studies that the superconducting state in CeCoIn5 could be switched on and off with powerful magnets that are currently available in the laboratory, whereas the requisite magnetic fields needed to modulate cuprates far exceed those of even the most sophisticated techniques.

Turning off the superconducting state in CeCoIn5, the team reasoned, would allow them to “look under the hood,” and study how the material’s electrons behave in a normal, non-superconducting state. Since cuprates and CeCoIn5 share similar electronic density patterns, the team inferred that studying CeCoIn5 in all its different phases could provide important new clues into the origins of cuprates’ superconducting capabilities.

“CeCoIn5 is a very useful model system. It’s an unconventional superconductor whose properties are very accessible to experimental techniques at high magnetic fields, some of which are not possible in cuprates,” said first author Nikola Maksimovic, a graduate student researcher in Berkeley Lab’s Materials Sciences Division and the Analytis lab in UC Berkeley’s Physics Department.

To begin testing the material as a potential cuprate model, the researchers grew more than a dozen single-crystals of CeCoIn5 at their Materials Sciences Division lab, and then fabricated experimental devices from those crystals at the Molecular Foundry’s National Center for Electron Microscopy facility.

Maksimovic measured the electron density of these materials at the National High Magnetic Field Laboratory’s Pulsed Field Facility at Los Alamos National Laboratory using magnetic fields of up to 75 tesla, which is about 1.5 million times stronger than the Earth’s magnetic field.

Then, a team led by Alessandra Lanzara used spectroscopic techniques at Berkeley Lab’s Advanced Light Source to image the CeCoIn5 crystals’ electronic energy structure as a function of chemical composition. Lanzara is a senior faculty scientist and co-investigator in the Quantum Materials program in Berkeley Lab’s Materials Sciences Division and a UC Berkeley physics professor.

Much to their surprise, the researchers found that in chemical compositions where the superconductivity is strongest, the number of free electrons jumps from a small value to a large value, signifying that the material is at a transition point. (A free electron is an electron that is not permanently bound to an atom.) The researchers attributed this transition to the behavior of electrons associated with the cerium atoms.

“There are only a few materials where such a transition is suspected to occur. We have some of the clearest evidence that it actually does, and that’s pretty exciting,” Maksimovic said.

Researchers from the National High Magnetic Field Laboratory facilities in Tallahassee, Florida, and Los Alamos, New Mexico; and from Uppsala University, Sweden, participated in the study.

This work was supported by the DOE Office of Science. Additional funding was provided by the Gordon and Betty Moore Foundation’s EPiQS Initiative.