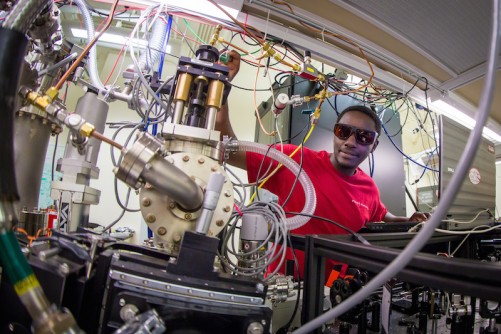 For the experiment, Stanford graduate student Georges Ndabashimiye had to figure out how to freeze argon gas into a thin layer inside a small vacuum chamber chilled to 20 kelvins – close to absolute zero. 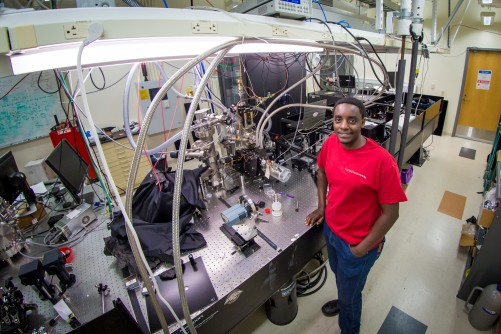 Stanford graduate student Georges Ndabashimiye in the PULSE Institute laser lab at SLAC where the experiments were performed.

Newswise — To observe something as small and fast as an electron rushing to form a chemical bond, you need a bright light with an incredibly small wavelength that comes in very fast pulses – just a few attoseconds, or billionths of a billionth of a second, long.

Scientists figured out more than a decade ago how to make this specialized form of light through a process known as “high harmonic generation,” or HHG, which shifts laser light to much shorter wavelengths and shorter pulses by shining it through a cloud of gas.

Now researchers at the Department of Energy’s SLAC National Accelerator Laboratory, Stanford University and Louisiana State University have achieved an even more dramatic HHG shift by shining an infrared laser through argon gas that’s been frozen into a thin, fragile solid whose atoms barely cling to each other.

The laser light that emerged from the frozen gas was in the extreme ultraviolet range, with wavelengths about 40 times shorter than the light that went in, they report today in the journal Nature.

The results give researchers a potential new, solid-state tool for “attosecond science,” which explores processes like the motions of electrons in atoms and the natural vibrations of molecules.

And in the longer term, they could lead to bright, ultrafast, short-wavelength lasers that are much more compact, and perhaps even electronic devices that operate millions of times faster than current technology, says David Reis, a co-author of the report and deputy director of the Stanford PULSE Institute, a joint institute of SLAC and Stanford.

“Now, for the first time, we are able to directly compare how high harmonic generation works in the solid and gaseous forms of a single element. We did this in both argon and krypton,” Reis said.

“These comparisons should allow us to resolve a number of outstanding questions – for instance, what, exactly, is the effect of packing the atoms closer together? In our study it seemed to enhance the HHG process. We expect that these results, and follow-up studies that are already underway, will give us a much better understanding of the fundamental physics.”

High harmonic generation is far from new. Discovered in the late 1980s, it offers a way to produce laser-like bursts of light at far higher frequencies and shorter wavelengths than a laser can generate directly. But only in the past decade has it been developed into a readily accessible tool for exploring the attosecond realm.

In 2010, a PULSE team led by Reis and SLAC staff scientist Shambhu Ghimire reported the first observation of HHG in a crystal ­– zinc oxide, a semiconducting material that is probably most familiar as a white powder in sunscreens.

But it was difficult to compare how HHG proceeds in this complex solid to what happens in a gas. So in 2011 they began a series of experiments to directly compare HHG in gaseous and solid argon.

“This is a conceptually simple but technically very challenging experiment,” Ghimire says. “Argon crystals are extremely, extremely fragile, and the reason they’re fragile is that the interaction between the atoms is very weak. But this was just what we wanted – something that looked just like a gas, but at higher density.”

The work of performing the experiment and analyzing the data fell to Georges Ndabashimiye, a graduate student at PULSE and the Stanford Department of Applied Physics, who had to figure out how to freeze argon gas into a thin layer inside a small vacuum chamber chilled to 20 kelvins – close to absolute zero.

Ndabashimiye says he had to be patient with the challenging process. “I didn't really know how it was going to turn out, but it kept working and I found I could do more and learn more. That was quite exciting,” he says.

When used to perform HHG, the argon crystal reduced the wavelength of incoming laser light 40-fold, compared to 20-fold in argon gas hit with the same level of illumination. Consequently, it also produced a laser beam of much higher energy – 40 electronvolts, versus 25 electronvolts in argon gas.

Packing the atoms closer together appears to produce higher harmonics than using single, widely spaced atoms, the researchers said, and working with these frozen gases should help them figure out why.

There are also many commonalities between the behavior in gases and solids, which leads them to believe that techniques developed for working with gases can be applied to solids, too.

“If a wide range of different types of solids can produce these attosecond pulses, we might be able to engineer the right solid with the right properties for things like inspecting semiconductor chips and masks, developing new types of microscopy and mapping out how electrons behave inside solids,” Reis said.

Theorists at Louisiana State University also contributed to the research, which was funded by the DOE Office of Science and the National Science Foundation. The research team also used SLAC’s Stanford Synchrotron Radiation Lightsource (SSRL), a DOE Office of Science User Facility, to measure the quality of the frozen argon crystals. 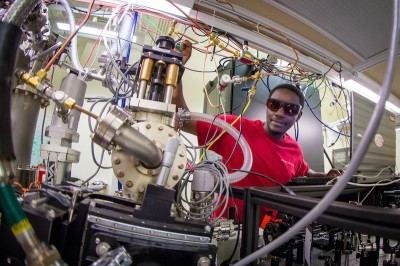 Caption: For the experiment, Stanford graduate student Georges Ndabashimiye had to figure out how to freeze argon gas into a thin layer inside a small vacuum chamber chilled to 20 kelvins – close to absolute zero. 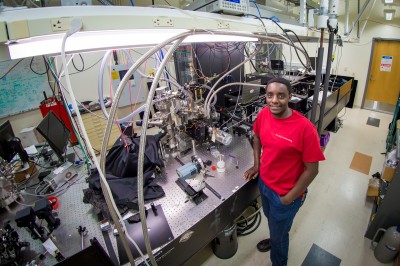 Caption: Stanford graduate student Georges Ndabashimiye in the PULSE Institute laser lab at SLAC where the experiments were performed.