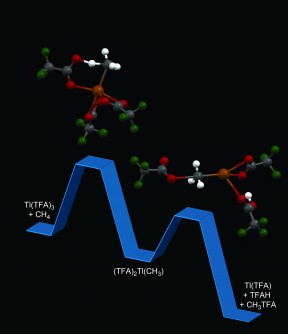 Image by the Periana lab, The Scripps Research Institute.

The work uses clever chemistry and nontraditional materials to turn natural gas into liquid products at much lower temperatures than conventional methods. Depicted here is the reaction of methane with a main salt group.

Newswise — JUPITER, FL – March 13, 2014 – As the United States continues to lead the world in the production of natural gas, scientists from the Florida campus of The Scripps Research Institute (TSRI) have devised a new and more efficient method with the potential to convert the major components found in natural gas into useable fuels and chemicals—opening the door to cheaper, more abundant energy and materials with much lower emissions.

The research, which was led by TSRI Professor Roy Periana, uses clever chemistry and nontraditional materials to turn natural gas into liquid products at much lower temperatures than conventional methods.

“We uncovered a whole new class of inexpensive metals that allows us to process methane and the other alkanes contained in natural gas, ethane and propane, at about 180 degrees centigrade or lower, instead of the more than 500oC used in current processes,” said Periana. “This creates the potential to produce fuels and chemicals at an extraordinarily lower cost.”

The research was described in the March 14, 2014 edition of the journal Science.

Methane is the most abundant compound in natural gas. However, converting methane into a useable, versatile liquid product remains a costly and complicated process that has changed little from the original process developed in the 1940s. But with the boom in natural gas discovery growing every day, new processes are needed to convert methane to fuel and chemicals that can compete economically with production from petroleum.

Methane, alkanes and propane, the major components in natural gas, belong to a class of molecules named alkanes that are the simplest hydrocarbons and one of the most abundant, cleanest sources of energy and materials. However, transportation can be expensive and converting these alkanes into other useful forms such as gasoline, alcohols or olefins is expensive and often inefficient.

At the core of technologies for converting the alkanes in natural gas is the chemistry of the carbon-hydrogen bond. Because of the high strength of these bonds, current processes for converting these alkanes employ high temperatures (more than 500oC) that lead to high costs, high emissions and lower efficiencies.

The development of lower temperature (less than 250oC), selective, alkane carbon-hydrogen bond conversion chemistry could lead to a major shift in energy and materials production technology.

Periana has been thinking about this type of problem for decades in pursuit of lower-cost, environmentally friendly energy solutions and has designed some of the most efficient systems (Periana et. al., Science 1993, 1998 and 2003) for alkane conversion that operate at lower temperatures.

However, when Periana and his team examined these first-generation systems they realized that the precious metals they used, such as platinum, palladium, rhodium, gold, were both too expensive and rare for widespread use.

"What we wanted were elements that are more abundant and much less expensive that can carry out the same chemistry under more practical conditions,” said Brian G. Hashiguchi, the first author of the study and a member of Periana’s lab. “We also wanted to find materials that could convert methane as well as the other major components in natural gas, ethane and propane.”

Approaching the problem both theoretically and experimentally, the team hit on inexpensive metals known as main group elements, some of which are byproducts of refining certain ores. For example, one of the materials can be made from common lead dioxide, a synthetic compound used in the production of matches and fireworks.

“The reaction of alkanes with this class of materials we’ve identified is novel,” Periana said. “They can react with methane, ethane as well as propane at lower temperatures with extraordinarily selectivity—and produce the corresponding alcohols as the only the desired products. These products are all major commodity chemicals and are also ideal, inexpensive sources for fuels and plastics."

If successfully developed, a new process using these metals could potentially allow the large reserves of natural gas in the United States to be used as alternative resources for fuels and chemicals.