Searching for the Origins of Presolar Grains 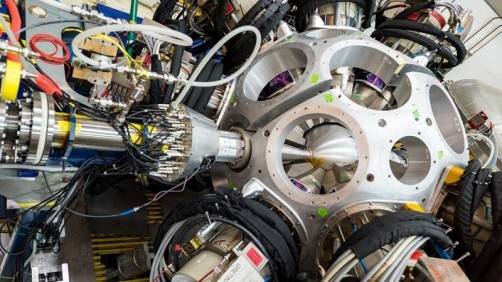 The researchers used the GRETINA to detect gamma rays emitted by argon-34 isotopes.

Some meteorites that hit the Earth contain microscopic grains of stardust. These “presolar grains” were created by nucleosynthesis during the explosions of stars before our solar system existed. These presolar grains provide important insights into how the elements in our Galaxy formed. Many grains contain sulfur isotopes in amounts that are clues to their origins. Nuclear physicists now know that the production of sulfur isotopes in novae and supernovae depends on the prior production of argon-34. To study this production, scientists created the argon-34 isotope in the laboratory and characterized its properties. Using nova and supernova models, they also established a criteria for determining whether particular grains originated in novae or supernovae.

Novae and supernovae are the most frequent and most violent stellar explosions in our Galaxy. Scientists have studied these explosions for decades. Now, by analyzing the properties of argon-34, nuclear scientists calculated the ratios of various sulfur isotopes produced in both types of stellar explosions. This enables astrophysicists to determine whether specific presolar grains came from novae or supernovae. For example, if the ratio of sulfur-32 to sulfur-33 ratio in a presolar grain is about 65-80 to 1, the grain probably came from a nova explosion. However, if the ratio is in the 130-200 to 1 range, the grain probably formed in a type-II supernova explosion.

To better understand the origins of presolar grains, researchers in nuclear physics pioneered a new approach using the Gamma-Ray Energy Tracking In-beam Array (GRETINA) coupled with the Fragment Mass Analyzer (FMA) at the Argonne Tandem Linac Accelerator System (ATLAS), a Department of Energy (DOE) Office of Science user facility for nuclear structure research. GRETINA is a state-of-the-art detection system able to trace the paths of gamma rays emitted from nuclear reactions. Using GRETINA, the researchers completed the first detailed gamma-ray spectroscopy study of the nucleus of an astronomically important isotope, argon-34. The researchers synthesized argon-34 by bombarding a carbon-12 target with a beam of magnesium-24 ions produced by the ATLAS accelerator. GRETINA detected the gamma rays emitted from excited states in argon-34, while the FMA identified argon-34 nuclei recoiling from the target. The researchers used the measured gamma-ray energies and angular distributions to establish properties of the excited states in argon-34. These properties enabled the scientists to apply nova and supernova models in calculating the ratios of various sulfur isotopes produced in stellar explosions. Using this information, astrophysicists will be able to determine whether particular presolar grains are of nova or supernova origin.

This work was supported by the DOE Office of Science, Office of Nuclear Physics, the U.K. Science and Technologies Facilities Council, the Natural Sciences and Engineering Research Council of Canada, the Spanish Ministry of Economy and Competitiveness MINECO by the European Union, and by the Agency for Management of University and Research Grants/Catalonia.