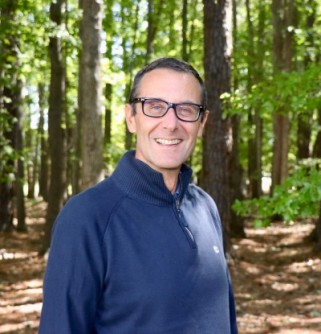 Marco Battaglieri is the new group leader of Jefferson Lab’s Experimental Hall B.

“Jefferson Lab is the best lab for hadronic nuclear physics not only for the U.S., but is worldwide one of the best facilities. It will be very interesting and very exciting to work in the place where I scientifically grew up,” Battaglieri said.

The lab’s Experimental Hall B group consists of about 40 scientists, engineers and technicians who support experiments conducted in the hall by a collaboration of more than 200 nuclear physicists worldwide. Battaglieri has been a longtime member of the hall’s scientific collaboration and has already provided leadership on several experiments carried out in the hall.

“I think that the best and the most important goal I have is to provide leadership and coordination for a group of very, very smart people,” he said. “My main focus is to provide a service for the scientific Users. The User community is looking for a place to run the best experiments in the world, and we need to provide the right environment for that.”

Prior to coming to Jefferson Lab, Battaglieri was a senior scientist in the experimental Nuclear Physics Group of the Istituto Nazionale di Fisica Nucleare (INFN) in Genova, Italy. He also served as the Italian national co-spokesperson of the JLab12-INFN experiment group from 2012-2018, which consists of 60 nuclear physicists based at INFN who conduct research at Jefferson Lab.