The Department of Energy’s Oak Ridge National Laboratory is developing new methods to identify electrical arcing that can spark wildfires, using a combination of computer algorithms and drone-mounted sensors. Researchers are also honing the use of sensors to support U.S. Forest Service decisions about how to fight fires on the move.

The Department of Energy’s Oak Ridge National Laboratory is developing new methods to identify electrical arcing that can spark wildfires, using computer algorithms and drone-mounted sensors. Researchers are also honing the use of sensors to support U.S. Forest Service decisions about how to fight fires on the move.

An ORNL research team has demonstrated that thermal imaging sensors mounted on drones can sense the presence of fire under tree cover and indicate its size, even when there is little to no smoke. 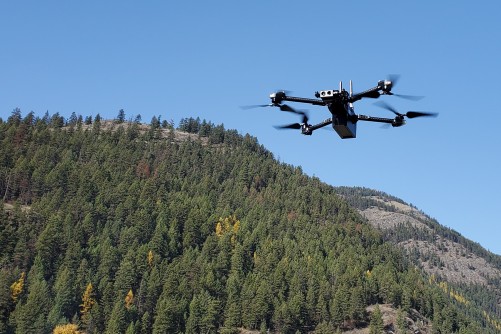 ORNL researchers are perfecting ways to use drones to check remote parts of the electric grid for dangerous electrical arcing that could start wildfires.

Newswise — As climate change leads to larger and more frequent wildfires, researchers at the Department of Energy’s Oak Ridge National Laboratory are using sensors, drones and machine learning to both prevent fires and reduce their damage to the electric grid. Engineers are honing technology to remotely sense electrical arcing and faulty equipment, as well as the direction of spreading fires.

The need is urgent. The largest recorded wildfire years have occurred since 2004, coinciding with many of the warmest years on record, according to National Interagency Fire Center data.  Electric utilities have a large stake in addressing the crisis, given that many wildfires are sparked by power lines, and wildfires can cause widespread electrical outages.

Last fire season, DOE targeted funding for a handful of wildfire projects, including two at ORNL. “We chose this research to be accelerated because we recognize how critical and hazardous wildfire has become due to climate change and other factors,” said Stewart Cedres, a senior DOE technical lead and strategist. Wildfire damage to transmission lines can cause brownouts and blackouts several states away, he noted.

“The work ORNL is doing with sensor technology on drones that can go beyond line of sight is unique and very critical because it allows us to be several steps ahead of issues that can put the grid at risk, making it unreliable and less resilient,” Cedres said.

Cedres said DOE has a twofold interest: preventing fires from being started by the electric grid and protecting the grid from fires. An ORNL team led by Peter Fuhr, head of ORNL’s Grid Communications and Security Group, is working on both these problems. It is also honing fire detection sensing for the U.S. Forest Service, the primary agency for fighting wildfires.

The White House in July pointed to the wildfire research being conducted by Fuhr’s team in explaining how the Biden Administration is tackling the wildfire threat.

Sensors placed near power lines or in power electronics equipment can register variations in power flow that lead to superheated sparks. ORNL researcher Ali Ekti is developing an algorithm for rapidly recognizing and classifying these electrical arcing events, which occur when electricity jumps through the air between two conductors.

Ekti is using a library of wave form “signatures,” contributed by utilities and universities, which show spikes in voltage or current caused by anomalies such as arcing. His algorithm detects these anomaly regions. The next steps will involve training a software program to recognize similar signatures and pinpoint where the arcing is happening. The algorithm, which could be deployed within power electronics equipment, would alert the utility command center so staff could check the location – if it’s accessible.

This is where drones come in: Often arcing happens in rugged areas that are tough to reach. Airplanes and helicopters sometimes can’t get low or close enough to find small arcs. They are also much more expensive to fly and difficult to schedule quickly, Fuhr said.

“Drones are already out there doing vegetation management. So why don’t we use an additional technology on the same platform to check for arcing at the same time?” Fuhr said. “We’re establishing demonstrations in the coming year at utilities large and small across the nation.”

Drone-mounted audio sensors face a challenge in distinguishing the crackling noise of arcing from the buzz of the drone propeller. But Ekti has developed a new technique using math to extract the audio signature of arcing from background noise.

Fuhr’s team may field test this at another demonstration in October for the Forest Service. Around Kootenai National Forest in Montana, ORNL researchers will show how they can use drones to thermally detect sparks ahead of a large blaze.

The team tested the technique this summer at a nearby farm by lighting a contained bonfire among scattered small cans of burning gel fuel. They experimented to learn the height at which a drone-mounted sensor could identify the tiny flames below.

This capability could be a game-changer in fighting wildland fire, said Marva Willey, a U.S. Forest Service fuel specialist who serves on the agency’s tools and technology team. “Heat-detecting sensors have so many applications that can increase our situational awareness and knowledge of where heat and fire are,” she said. “It’s all about knowing what’s going on before you put people out there.”

Drone-mounted sensors could help find new fires caused by embers that can blow as far as a mile from the main blaze, Willey said. Nothing else can sense heat under a canopy of trees where smoke isn’t visible. The drones could also be used to locate hot spots remaining in a burned-over area — a task now performed by hand as firefighters sift through ash.

ORNL researchers are providing sensors for another Forest Service experiment, related to detecting heat from extremely high altitudes. Sensors could be carried either by a balloon or a solar-powered, long-endurance vehicle flying above thunderstorms checking for fires ignited by lightning strikes. That technology is scheduled for testing later this year. Willey said it could reduce the need for piloted fire-spotting flights, eliminating human risk while using limited resources wisely.

Fuhr’s team has begun investigating other ways to prevent electrical fire using drone-mounted sensors, such as detecting whether splices or transformers are generating excess heat.

In 2021, when a wildfire caused by downed power lines was burning in nearby Wears Valley, Tennessee, Fuhr and his team received permission from firefighters to use drones to monitor heat in transmission lines and transformers amid the blaze. Even if they survive the fire, transformers could be compromised by exposure to temperatures hotter than their operating limits, Fuhr said. This could help identify where equipment should be replaced.

“New Mexico was on fire earlier this year, and when you see the devastation that happened with the (2018) Camp Fire and the resulting bankruptcy of the utility – if our activities can reduce those kinds of outcomes, it’s good for everyone,” Fuhr said.

UT-Battelle manages Oak Ridge National Laboratory for the U.S. Department of Energy’s Office of Science. The single largest supporter of basic research in the physical sciences in the United States, the Office of Science is working to address some of the most pressing challenges of our time. For more information, please visit https://energy.gov/science.