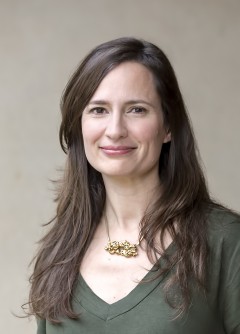 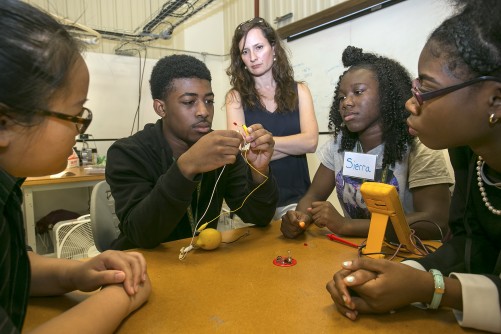 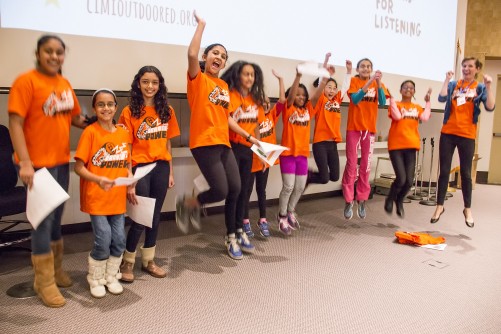 Greco and the "Orange Power" Lego robotics team she coached jump for joy during a practice presentation. 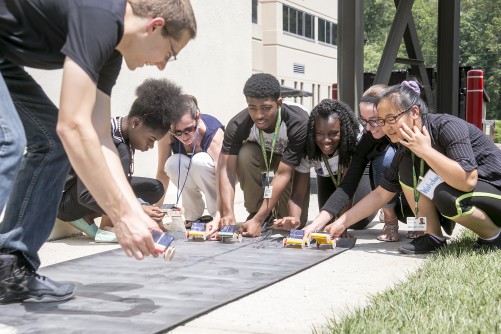 Newswise — Shannon Greco, a science education program leader at the U.S. Department of Energy’s Princeton Plasma Physics Laboratory, has been named one of the YWCA Princeton’s “women of excellence” for her work with young women and disadvantaged youth, including her help in starting two all-girls robotics teams for the YWCA Princeton.

Greco organized PPPL and Princeton University volunteers to coach and advise two teams of girls ages 9 to 14 competing in a Lego robotics project for the FIRST® LEGOLeague and coached one team herself. Greco is also working on fostering a partnership with the Northstar Academy in Newark, and is leading Science Education’s high school internship program. She established an energy camp for Trenton High School students last summer that taught students about various types of energy.

“Shannon’s leadership, passion for science, and being a role model for this unique all-girl team has resulted in empowering girls through scientific literacy and positioned the teams for their first competition in November 2015,” said Cheryl Rowe-Rendleman, the first vice-president of the YWCA Princeton’s Board of Directors, who nominated Greco for the award.

The award, which Greco will receive at the YWCA Princeton’s “33rd Annual Tribute to Women Awards Dinner” on March 3 at the Hyatt Regency in Princeton, is given to women who “embody the YMCA’s mission of eliminating racism and empowering women.” For more information on the event, go to www.ywcaprinceton.org/tribute. “I’m incredibly honored,” Greco said. “It’s very nice to be recognized for doing something that you love and that makes you feel like you’re making an impact.”

“I might be a STEM (science, technology, engineering, and mathematics) education zealot,” Greco admits. She firmly believes that science education is a critical component of every youngster’s education and gives him or her skills they can use in every aspect of their lives. “It helps them think critically and have a healthy respect for the data,” she said. “It protects them from getting the wool pulled over their eyes and helps them make decisions about their health and their family. It even helps them with their voting decisions. And if they actually go into one of these STEM fields, they can contribute to solving the energy crisis or climate change.”

A part-time job becomes a career

Greco grew up in Houston until she was 15 when her father got a job in Saudi Arabia and Greco attended an international boarding school in Switzerland. She then went to the University of Arizona where she studied international studies and spent a semester living in Mali. After college, she spent a few years traveling around the world and began working part-time for the Princeton Center for Complex Materials (PCCM), a research center supported by the National Science Foundation. Greco spent 11 years as an education outreach coordinator at PCCM. She went on to get a master’s degree in science education from Montana State University. She met her husband, Scott, an entrepreneur, in 2003 and the two married in 2009.

When Greco came to PPPL for an interview two years ago and was asked why she wanted to come to work in PPPL’s Science Education program, she replied, “It seems like you guys have more fun over here!” She said she appreciates the camaraderie and the passion everyone in Science Education has for science education. “The way all our different roles interact works out really well,” she said.

“She’s very engaged, she is very thorough, she doesn’t mind if it takes time for the explanation to get through,” said Greco’s colleague Arturo Dominguez, a senior program leader.

Balancing a demanding career with raising two young children, Lukas, who is almost 4, and Ryan, who is 16 months, when both she and her husband are working is “really hard,” Greco says.

One way Greco copes is to sometimes bring Lukas or Ryan along to after-work activities. “She often attended meetings with her robotics team with her young child comfortably nestled in a baby carrier over her shoulder,” the Y’s Rowe-Rendleman said. “This is more than a heart-warming picture. It truly sends a message to the young girls and teens that one can be both a scientist and a mother. One does not need to choose between the two demanding and rewarding roles.” 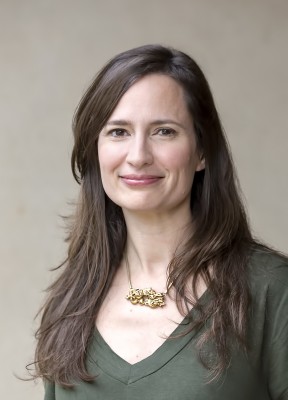 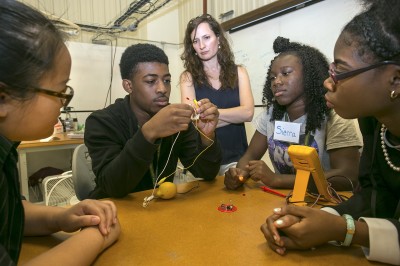 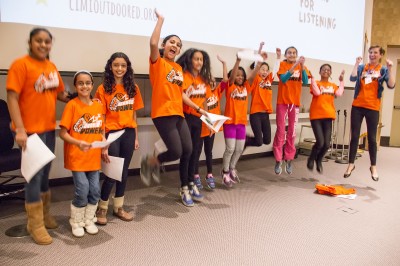 Caption: Greco and the "Orange Power" Lego robotics team she coached jump for joy during a practice presentation. 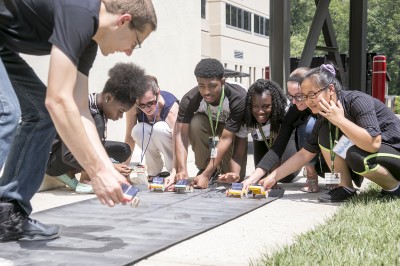