With expertise in high-performance and distributed computing, Jha will lead a center that provides the focal point for data science research and development 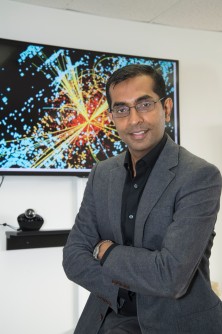 Newswise — UPTON, NY—Computational scientist Shantenu Jha has been named the inaugural chair of the Center for Data-Driven Discovery (C3D) at the U.S. Department of Energy’s (DOE) Brookhaven National Laboratory, effective October 1. Part of the Computational Science Initiative (CSI), C3D is driving the integration of domain, computational, and data science expertise across Brookhaven Lab’s science programs and facilities, with the goal of accelerating and expanding scientific discovery. Outside the Lab, C3D is serving as a focal point for the recruitment of future data scientists and collaboration with other institutions.

Jha holds a joint appointment with Rutgers University, where he is an associate professor in the Department of Electrical and Computer Engineering and principal investigator of the Research in Advanced Distributed Cyberinfrastructure and Applications Laboratory (RADICAL). He also leads a project called RADICAL-Cybertools, which are a suite of building blocks enabling the middleware (software layer between the computing platform and application programs) that supports large-scale science and engineering applications.

“Brookhaven hosts four DOE Office of Science User Facilities—the Accelerator Test Facility, Center for Functional Nanomaterials, National Synchrotron Light Source II, and Relativistic Heavy Ion Collider—and participates in leading roles for at least two more facilities,” said Jha. “Further, there are unprecedented collaborative opportunities that CSI provides with other Lab divisions and nearby high-tech, pharmaceutical, and biotech companies. Leading C3D, which will be at the nexus of these collaborations and the intersection of high-performance computing and data science, is truly an unique opportunity.”

Jha’s research interests lie at the intersection of high-performance and distributed computing, computational science, and cyberinfrastructure (computing and data storage systems, visualization environments, and other computing infrastructure linked by high-speed networks). He has experience collaborating with scientists from multiple domains, including the molecular and earth sciences and high-energy physics.

In his new role, Jha will work with domain science researchers, computational scientists, applied mathematicians, computer scientists and engineers. Together, they will develop, deploy, and operate novel solutions for data management, analysis, and interpretation that accelerate discovery in science and industry and enhance national security. These solutions include methods, tools, and services—such as machine-learning algorithms, programming models, visual analytics techniques, and data-sharing platforms. Initially, his team will focus on scalable software systems; distributed computing systems, applications, and middleware; and extreme-scale computing for health care and precision medicine. Partnerships with other national laboratories, colleges and universities, research institutions, and industry will play a critical role in these efforts.

“Shantenu’s leading research in infrastructures for streaming data analysis and novel approaches to high-performance workflows and workload management systems—as well as his expertise in application areas such as materials science and health care—ideally position him for the role of C3D chair,” said CSI Director Kerstin Kleese van Dam. “We are excited to work with him to realize our vision for C3D.”

Prior to joining Rutgers in 2011, Jha was the director of cyberinfrastructure research and development at Louisiana State University’s Center for Computation and Technology. He was also a visiting faculty member in the School of Informatics at the University of Edinburgh and a visiting scientist at the Centre for Computational Science at University College London.

Jha is the recipient of the National Science Foundation’s Faculty Early Career Development Program (CAREER) award, several best paper awards at supercomputing conferences, a Rutgers Board of Trustees Research Fellowship for Scholarly Excellence, and the Inaugural Rutgers Chancellor’s Award for Excellence in Research (the highest award for research contributions that is bestowed to Rutgers faculty). He serves on many program committees—including those for the annual SuperComputing Conference, Platform for Advanced Scientific Computing Conference, International Symposium on Cluster, Cloud and Grid Computing, and International Parallel and Distributed Processing Symposium—and has presented his research at invited talks and keynotes around the world. He holds a PhD and master’s degree in computer science from Syracuse University and a master’s degree in physics from the Indian Institute of Technology Delhi.