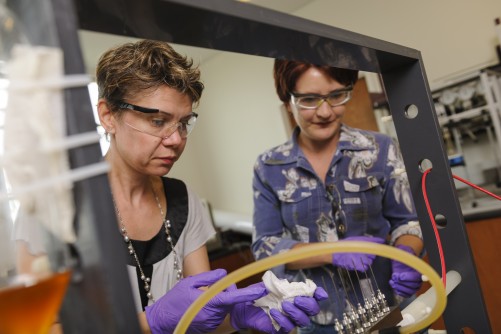 Drs. Gabriela Gurau, left, and Julia Shamshina work in a UA lab with an electrospinning apparatus 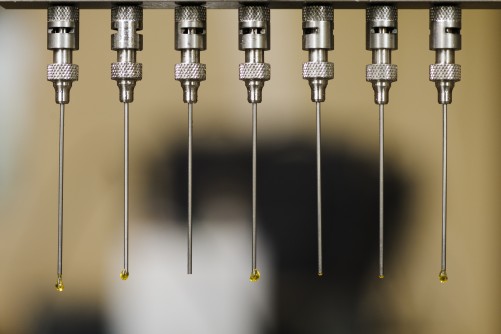 Fibers begin forming near the ends of tiny nozzles in a UA laboratory set-up. The researchers are refining a new material to potentially extract uranium from the ocean for use in nuclear power.

Newswise — TUSCALOOSA, Ala. — The U.S. Department of Energy selected a University of Alabama start-up company for an approximate $1.5 million award to refine an alternative material to potentially extract uranium from the ocean.

Uranium, which naturally occurs in seawater and in the Earth’s crust, is the fuel for nuclear power. For decades, scientists have sought a more economical and efficient way to remove it from the ocean, as the terrestrial supply is dwindling and environmentally unfriendly to mine.

“Every scientist in the world, except us, who is trying to do this is working with plastics,” said Dr. Gabriela Gurau, a chemist and CEO of the UA-based company, 525 Solutions.

Instead, the UA company is developing an adsorbent, biodegradable material made from the compound chitin, which is found in shrimp shells and in other crustaceans and insects. The researchers have developed transparent sheets, or mats, comprised of tiny chitin fibers, modified for the task. When suspended beneath the ocean’s surface, the mats are designed to withdraw uranium.

“Once you put it in the ocean, it will attract uranium like a magnet, and uranium will stick to it,” said Gurau, a University of Alabama alumna.

If one day implemented, the mats, with uranium attached, would be taken to an industrial plant where the nuclear fuel source would be removed.

Rogers is an owner/founder of 525 Solutions and serves as a scientific adviser to the company’s representatives.

"The oceans are estimated to contain more than a thousand times the amount of uranium found in total in any known land deposit," Rogers said. "Fortunately, the concentration of uranium in the ocean is very, very low, but the volume of the oceans is, of course, very, very high. Assuming we could recover only half of this resource, this much uranium could support 6,500 years of nuclear capacity."

Removing chitin, in a pure form, from shells had previously proven difficult, but Rogers and his UA colleagues discovered a way to use a relatively new class of solvents, called ionic liquids, for removal. Ionic liquids are liquid salts which have other unique and desirable properties that traditional solvents do not. Rogers is recognized as a world-leader in the field of ionic liquids.

UA researchers use a time-honored laboratory technique called electrospinning to produce the mats. In this process, the scientists use a specially-prepared, chitin-based, ionic liquid solution, which is loaded in the electrospinning apparatus. Some 30,000 volts of electricity are applied, spinning the fibers into a water bath. After several hours, nanofiber mats, consisting of fibers much thinner than a strand of a spider's web, form, weaved together into a solid sheet.

The increased surface area the nanomats provide is central to the project, said Dr. Julia Shamshina, the company’s chief technology officer and also a UA alumna.

“The larger the surface area, the larger modifications we can make and the more uranium it will uptake,” Shamshina said. “If you have one very thick fiber and 10 which, when combined, equal the size of the thick fiber, the ten smaller ones will take up hundreds, or even thousands, of times more uranium.”

One of more than a dozen startup companies calling The University of Alabama home, 525 Solutions received early assistance and mentoring through the Office for Technology Transfer within the UA Office of the Vice President for Research. Research by the company’s scientists has led to the awarding of multiple patents.

"Mining uranium from land is a very dirty, energy intensive process, with a lot of hazardous waste produced," Rogers said. "If we eliminate land mining by mining from the ocean, we not only clean up the ocean, we eliminate all of the environmental problems with terrestrial mining.

"Research studies have shown that uranium can be extracted from the ocean, but the process remains prohibitively costly," said Rogers, a two-time UA graduate. "The search for more effective adsorbents -- which is what we're doing -- is under way and expected to solve this issue."

Gurau said the two-year grant, from the DOE’s Office of Science through its Small Business Innovation Research and Small Business Technology Transfer programs, will enable the researchers to refine their processes, measure costs and conduct an environmental analysis.

“We need to know if it’s viable from an economic standpoint,” Gurau said. “I think this is a critical step in getting this to the pilot-plant stage.” 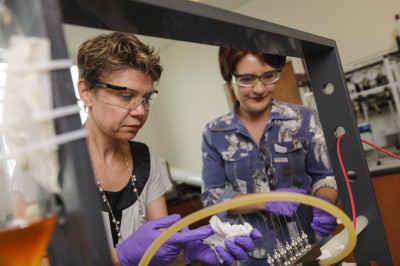 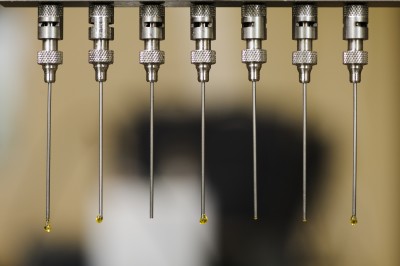 Caption: Fibers begin forming near the ends of tiny nozzles in a UA laboratory set-up. The researchers are refining a new material to potentially extract uranium from the ocean for use in nuclear power.