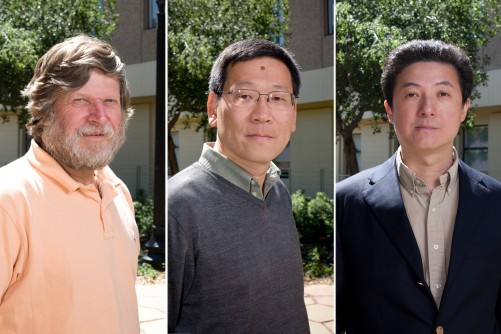 Newswise — Materials scientists and professors at Stanford University and the Department of Energy's SLAC National Accelerator Laboratory Zhi-Xun Shen, Shoucheng Zhang and Aharon Kapitulnik were elected to the National Academy of Sciences (NAS). All three researchers are principal investigators at the joint SLAC and Stanford Institute for Materials and Energy Sciences (SIMES).

"They have each separately won the Buckley Prize and now concurrent election into the NAS, all within the past few years," said Tom Devereaux, director of SLAC's Materials Science Division and SIMES. "SIMES is extremely proud of their exceptional accomplishments."

Shen is the Paul Pigott Professor in Physical Sciences at Stanford, a senior fellow of the Stanford Precourt Institute for Energy and advisor for science and technology and professor of photon science at SLAC. His research focuses on condensed matter and materials physics, as well as energy applications of materials and devices. He served as the first director of SIMES from 2006 to 2011.

"It is an honor to be elected to the academy, and I am particularly happy to receive this honor together with my distinguished colleagues from the physics community at Stanford and SLAC," Shen said.

Shen received his bachelor's degree from Fudan University in 1983, a master's degree from Rutgers University in 1985, and a PhD from Stanford in 1989. His work has been recognized by the DOE's E.O. Lawrence Award, the Kamerlingh Onnes Prize for superconductivity experiments, the Oliver E. Buckley Condensed Matter Physics Prize of the American Physical Society and the Einstein Professorship of the Chinese Academy of Sciences.

Zhang is the J.G. Jackson and C.J. Wood Professor of Physics at Stanford. He is a condensed matter theorist known for his work on topological insulators, spintronics and high-temperature superconductivity.

"I am deeply honored to be elected and greatly look forward to working with my colleagues at the National Academy," Zhang said. "I would also like to thank Stanford and SLAC for their years-long support."

Zhang received his bachelor's degree from the Free University of Berlin in 1983 and PhD from the State University of New York at Stony Brook in 1987. He received the Guggenheim Fellowship, the Alexander von Humboldt Research Award, the Johannes Gutenberg Research Award, the Europhysics Prize, the Oliver E. Buckley Condensed Matter Physics Prize, the Dirac Medal and Prize and the Physics Frontiers Prize for his theoretical prediction of the quantum spin Hall effect and topological insulators. He was also awarded the Benjamin Franklin Medal in Physics this year.

Kapitulnik is the Theodore and Sydney Rosenberg Professor of Applied Physics at Stanford and studies materials with novel electronic states at low temperatures. His research concentrates on the occurrence and properties of superconductivity, charge density, or magnetic states in such systems. He received his bachelor's degree and PhD from Tel Aviv University in 1975 and 1983, and has won numerous awards, including a Presidential Young Investigator Award, the Kamerlingh Onnes Prize for superconductivity experiments and the Oliver E. Buckley Condensed Matter Prize of the American Physical Society.

"I am happy to be elected and thrilled that such a group of physics and applied physics faculty were elected this year," Kapitulnik said. "Not only for myself, but also for Stanford and SLAC."

The three scientists are among several Stanford faculty members elected to the National Academy of Sciences among 84 new members and 21 foreign associates "in recognition of their distinguished and continuing achievements in original research," according to the NAS website. "Membership is a widely accepted mark of excellence in science and is considered one of the highest honors that a scientist can receive."