Simple is Beautiful in Quantum Computing

Defect spins in diamond were controlled with a simpler, geometric method, leading to faster computing. 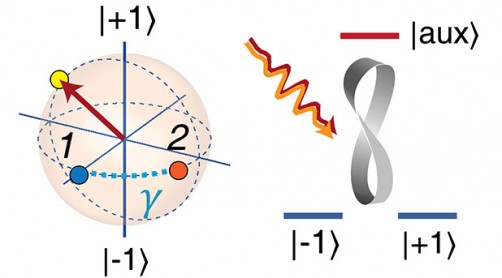 Quantum computers use electron spin orientation at a defect site in diamond to store information. The electron spin can be up (+1), down (-1), or anything in between. The spin (left, red arrow) is represented as a vector on a sphere. To change the spin from Position 1 to 2 normally requires two separate optical pulses. However, here a particular single pulse has accomplished the same electronic transition. This single pulse makes the electron travel on a geometric loop, analogous to a Möbius strip (right, a surface with one side and one boundary), such that its position is changed in a robust way after completing the loop.

Quantum computing could solve problems impossible for today’s supercomputers. The challenge for this new form of computing is processing the quantum bits (qubits) that represent data. A qubit can be made by controlling the orientation of an electron’s spin at a defect site in diamond. To solve a problem, a quantum computer uses logic gates to couple multiple qubits and output new information. Scientists designed a new protocol that can be used to develop fast, robust logic gates for qubits. The simple gates reorient electron spin on defect sites in diamond.  This new finding would allow faster and more efficient manipulation of the electron spins or qubits.

Researchers exert a new form of fast geometric control on the electron’s spin orientation. This enables faster and fewer gates to achieve the same operation on the qubit as conventional techniques, thus facilitating the development of future quantum computers. As an added bonus, the new gates are also less sensitive to noise than today’s operations (specifically, sequential, multi-pulse operations). Noise can destroy quantum information. Controlling qubits has the potential to bring us closer to practical quantum computers. It could advance our ability to develop high fidelity quantum logic.

Classical computers are number crunching machines, performing basic arithmetical operations on numbers. In computer language, these numbers are expressed in binary number units of zeros and ones, also called bits. Each bit, therefore, stores the smallest piece of information and can accept a value of either 1 or 0. Similar to classical computers, quantum computers are designed to operate on quantum bits. An extraordinary property of qubits is that they can be of any value equal to or between -1 and +1, until we measure them. As in a classical computer, the initial states of qubits need to be prepared before quantum data processing or data storage.

Diamond is a very promising material for quantum information processing. In diamond, a nitrogen atom can replace a carbon atom. When the nitrogen is next to a missing carbon atom in the crystalline lattice, this is called a nitrogen-vacancy defect. As well as possessing charge, this impurity possesses a property known as spin that can be used to store quantum information. Its spin can be initialized, manipulated, and “read out” with a laser at room temperature, unlike other quantum computing architectures that require low temperatures. This single impurity can emit one photon at a time. A photon can carry one qubit of information. Researchers discovered a simple method to prepare and manipulate the quantum state of a nitrogen-vacancy center acting as a qubit. Gates are used to prepare and manipulate the electronic transitions of qubits. A geometric gate relies on the evolution or geometric path of the spin instead of energy differences involved in the gates used in traditional computers. This particular geometric gate utilizes a single laser pulse to send the electron spin through a high-speed cycle. The geometry of the cycle is controlled by the single laser pulse and determines the final gate operations and electronic transitions. Further, careful control of the pulse energy significantly improved the fidelity of the electronic transition compared to traditional multi-pulse techniques, simplifying the path to practical quantum technologies.

This work was supported by the U.S. Department of Energy Office of Science, Office of Basic Energy Sciences; the Air Force Office of Scientific Research; the National Science Foundation; and the German Research Foundation for research at the University of Konstanz.