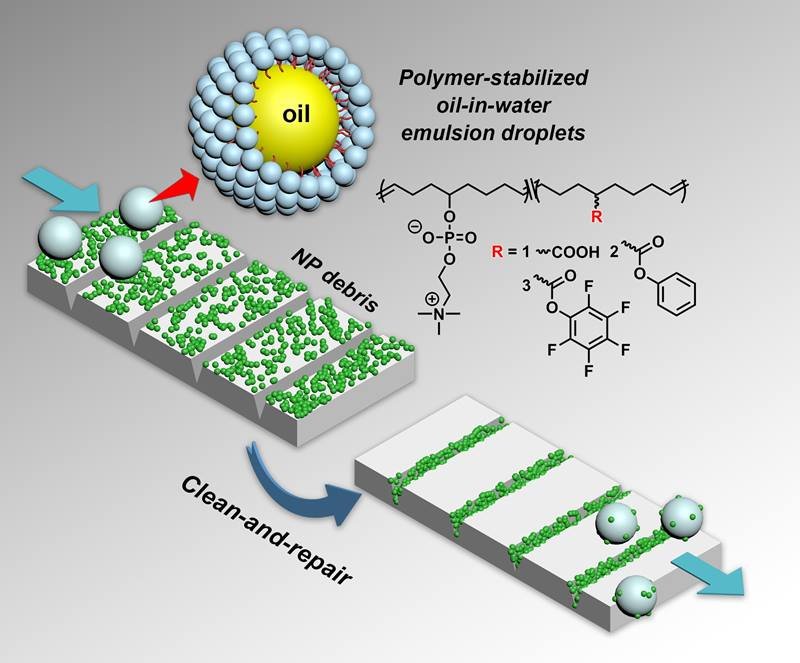 In a novel simultaneous clean-and-repair mechanism, flowing oil-in-water droplets move nanoparticle (NP) debris, shown as green spheres, into the cracks. The droplets pick up the NPs, then deposit them in the cracked regions.

Scientists have developed a novel and efficient approach to surface cleaning, materials transport, and repair. Polymer-stabilized droplets of oil wrapped in a shell of water molecules sweep across the surface, picking up debris particles. The particles are then deposited into damaged regions of the same surfaces. These results represent the first experimental example of this type of nanoparticle transport. Such work suggests a new, simple, and noninvasive strategy to achieve self-directed materials healing.

The team devised a new advance in fluid‐driven nanoparticle transport. It does not require additional material for repair. It’s readily deployed. The clean-and-repair process has the potential to streamline approaches for recovering mechanical, optical, or electrical properties in damaged materials. The materials could be automotive and machine coatings, etc.

Highly refined interactions among molecules and cells in biology have stimulated researchers to develop processes to create materials systems with otherwise unobtainable properties. For example, during healing of wounds such as broken bones, cells directed to the wounds organize and initiate events that lead to repair. Scientists at the University of Massachusetts-Amherst have developed a process for repairing damaged materials that imitate the recognition and transport capabilities inherent in this biological process. These new processes for healing nonbiological materials use markedly simpler chemical components and replace complex biological interactions with simple interfacial phenomena. When the surface of an inorganic material was cracked, the debris, made up of nanoparticles from the cracks, littered undamaged portions of the surface. The cracks were 1 to 2 microns wide and 6 to 8 microns deep (a micron is about the width of a human hair). To repair the damage, a catch-and-release mechanism was employed. Droplets were formed from polymers with functional groups tuned to provide just the right strength of interactions with the debris to allow selective relocation of the nanoparticles on the surface. These functional droplets located and picked up the nanoparticle debris, transported them to the cracks, and then dropped off the nanoparticles in the cracks. One key to this process is the preparation of functional polymers that simultaneously stabilize the droplets and only allow selective interactions with the nanoparticles at the droplet surface. Also important is the ability to tune droplet chemistry so that the droplets can recognize and take advantage of differences between the surfaces of clean and damaged regions. This ability to synthetically alter the chemistry of the polymers allows tunable interaction strengths from covalent to ionic to interfacial adsorption and in turn tunable extents of healing and repair.

This project was supported by the Department of Energy, Office of Science, Office of Basic Energy Sciences, Materials Sciences and Engineering Division.