Nearly 200 guests attended a symposium on fundamental physics to celebrate the former deputy director’s numerous scientific contributions, which continue to have a tremendous impact on our understanding of the subatomic world. 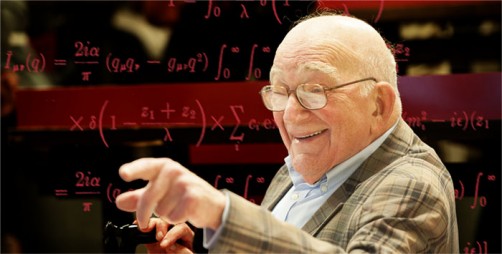 Newswise — With a symposium on fundamental physics, the Department of Energy’s SLAC National Accelerator Laboratory remembered one of its key figures: world-renowned theoretical physicist Sidney Drell, who passed away in December 2016. Nearly 200 guests attended the Jan. 12 event to celebrate Drell’s numerous scientific contributions, which continue to have a tremendous impact on our understanding of the subatomic world.

The professor emeritus of theoretical physics at SLAC and Stanford was widely recognized as a researcher of outstanding merit. From 1969 to his retirement in 1998, he was deputy director of SLAC, where he built a top-notch theory group and paved the way for decades of research at the forefront of fundamental science – a tradition that continues to this day.

“Sid’s vision is one of the reasons why SLAC exists,” said SLAC theorist and symposium chair Michael Peskin. “He had a crucial influence on the lab and the wider scientific community. It’s only appropriate that we celebrate him with this special event, which highlights the scientific topics he initiated and discusses their current status.”

Drell also dedicated a lot of time to policy, advising the United States government on national security issues, pushing for arms control and nuclear nonproliferation, and taking a stance against human rights violations by the Soviet government. For his dual role in science and the application of science to inform national policies, Drell received a number of prestigious awards, including the National Medal of Science in 2013 and the Enrico Fermi Award in 2000.

The SLAC event focused on the science.

“We wanted to bring people together who have worked with Sid and who have profited from this relationship in their careers,” Peskin said. “We wanted a forward-looking event that emphasizes how Sid’s scientific legacy continues to influence fundamental physics today.”

Nature at the Most Fundamental Level

Two symposium sessions were dedicated to scientific progress in the areas Drell made his best-known contributions: studies of the substructure of the proton and the search for unknown phenomena in precision studies of the electromagnetic force.

The first topic is the very reason SLAC was founded. In the 1960s, researchers used the lab’s 2-mile-long linear accelerator as a high-resolution electron microscope to examine whether protons are made up of more fundamental components. Thanks to those experiments and others, we now know that they are indeed composed of elementary quarks and gluons, which are tightly held together by the strong nuclear force.

Research into the fine details of the strong force and particle substructure continues to this day, for example at the Large Hadron Collider (LHC) at CERN, the European particle physics laboratory. One of the remaining big questions these modern particle physics experiments are trying to answer is whether particles like quarks, electrons or the Higgs boson are also composites of more fundamental particles. The symposium discussed an important tool for the analysis of these experiments – the Drell-Yan process, which was formulated by Drell and research associate Tung-Mow Yan in 1970.

Another series of lectures concentrated on precision tests of quantum electrodynamics – the quantum theory of the electromagnetic force. Drell recognized as early as the 1950s that such tests could reveal tiny deviations from the theory, potentially hinting at new fundamental physics. The symposium included presentations from two of the most incisive current experiments, the Muon g-2 experiment and ACME.

Dedication to Science and Beyond

Another session brought together Drell’s former students James “BJ” Bjorken, Robert Jaffe, Joel Primack, and former postdoctoral fellow Alan Guth, all of whom went on to have illustrious careers in academia. They gave personal accounts of their work and friendship with Drell, crediting him for having crucially influenced their careers.

“Sid continued what had already begun under H. Pierre Noyes, the first director of SLAC’s theory group,” Bjorken said. “He created an informal atmosphere in which nobody had to be afraid to ask questions. Seminars frequently lasted for hours, and all that mattered was to find answers to very fundamental questions.”

JoAnne Hewett, director of SLAC’s Fundamental Physics Directorate and the lab’s chief research officer, said, “Sid established an extraordinary culture of openness, friendliness and dedication that is fundamental to the great science done at SLAC.”

The symposium concluded with a session on the many other facets of Drell’s work and life, including his crucial role in informing physics-based policy for the nation’s nuclear weapons program and his friendship with Soviet nuclear physicist and dissident Andrei Sakharov.

The symposium was organized by Thomas Appelquist from Yale University; Michael Chanowitz from Lawrence Berkeley National Laboratory; Joel Primack from University of California, Santa Cruz; and Michael Peskin from SLAC.