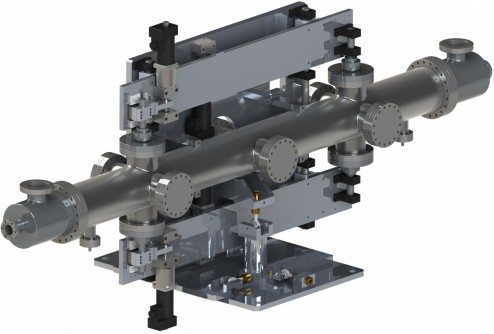 Design drawing of the outer structure of a dechirper that will be used to tweak the "color range" of light pulses from SLAC’s X-ray laser, LCLS. Two dechirpers will be lined up in front of the LCLS undulator—a magnetic structure that generates ultrabright, ultrafast X-rays from bunches of electrons. 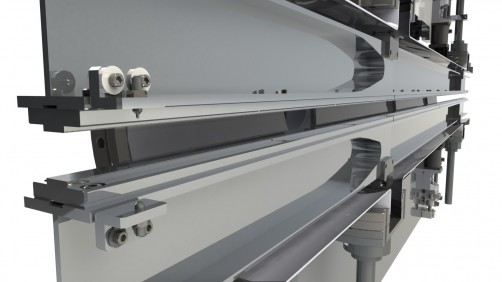 parallel, 2-meter-long, flat aluminum rails. Electron bunches will travel through a variable gap between the rails at nearly the speed of light. 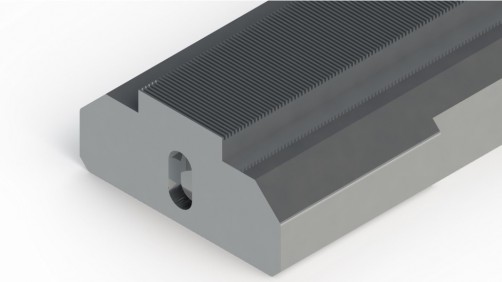 The aluminum rails have comb-like grooves that are half a millimeter deep and a quarter millimeter wide. The electron bunches "sense" the grooves, leading to a change in the energy spread of the X-rays they produce.

Newswise — The Department of Energy’s SLAC National Accelerator Laboratory has teamed up with Santa Monica-based RadiaBeam Systems to develop a device known as a dechirper, which will provide a new way of adjusting the range of energies within single pulses from SLAC’s X-ray laser.

The dechirper will enable scientists to narrow or broaden the spectrum of each X-ray pulse—similar to the spectrum of colors in visible light—up to four-fold. This will enhance the capabilities of experiments that use SLAC’s Linac Coherent Light Source, a DOE Office of Science User Facility, for pioneering studies in materials science, chemistry, biology and other fields.

“For many experiments it is important to use a specific X-ray energy so that we can study specific chemical elements in our samples,” says LCLS scientist William Schlotter. “The narrower the energy bandwidth, the more precisely we can study those elements.”

Tweaking the ‘Color Spectrum’ of X-ray PulsesLCLS generates ultrabright and ultrashort X-ray pulses from packets of electrons that travel through a magnetic structure, called an undulator, at almost the speed of light. The properties of the electron bunches determine the characteristics of the X-ray light that they produce.

Many experiments demand X-ray pulses that last only a few quadrillionths of a second, but it is difficult to make electron bunches this short. Therefore, scientists have turned to nature and adopted a solution reminiscent of a bird’s chirp. They create a spread of energies in the electron bunch, with the tail having more energy than the head. When electron bunches pass through another magnetic device known as a chicane, this so-called “energy chirp” allows lagging electrons in the tail to catch up with the ones in the head, creating shorter electron bunches, and thus shorter X-ray pulses.

However, since the chirp consists of a spectrum of energies, the X-rays also have multiple energies—a rainbow of X-ray “colors” known as the energy bandwidth. Depending on the type of experiment, this can be an advantage or disadvantage, and researchers would like to have new tools to adjust the energy bandwidth to match their needs.

As the name suggests, the dechirper’s primary task will be to minimize the chirp, i.e. to make pulses with a smaller spread in X-ray energies. Additionally, the dechirper can do the opposite and make X-ray pulses with a broader energy spectrum. In fact, many users have had a desire for a wider bandwidth since LCLS started operations in 2009, as LCLS scientist Sébastien Boutet points out.

Precision Tool to Manipulate Electron BunchesSLAC scientists first proposed the idea for a dechirper in 2012 and, together with researchers from Lawrence Berkeley National Laboratory, demonstrated its feasibility in a test experiment at the Pohang Accelerator Laboratory in South Korea.

The LCLS device, whose final design review will take place on Dec. 4, will consist of two flat, parallel aluminum rails, each 2 meters long, with comb-like grooves that are half a millimeter deep and a quarter millimeter wide. Two of these devices will be lined up in front of the undulator, with the electron beam traveling through the gap between the rails.

Even though the electron bunches will not touch the rails, they will “sense” the grooves. These “bumps” along the electrons’ flight path will create a wake at the tail of the bunch, similar to the wake behind a boat gliding over water. “In this process, the tail loses energy while the front stays the same,” explains accelerator physicist Richard Iverson, the project lead at SLAC, where the technical requirements for the dechirper were specified.

Varying the gap between the rails changes the effect on the electrons, allowing scientists to adjust the chirp of the electron bunches and, consequently, the energy bandwidth of the X-ray pulses generated in the undulator.

What may sound like a relatively simple setup poses significant challenges for the manufacturing process. “The dechirper’s grooves are only as wide as three or four human hairs,” says project manager Marcos Ruelas at RadiaBeam, where the device is being designed and constructed. “Moreover, the rails must be very flat and smooth. Over the entire length of 4 meters, their height can only differ by 50 micrometers.” To meet these requirements, each 2-meter rail will be manufactured in four smaller blocks.

The new device is expected to be installed at SLAC in August 2015. It will not only start providing LCLS users with more flexibility for their experiments, but will also become the test bed for dechirpers at SLAC’s next-generation LCLS-II facility and other X-ray lasers worldwide. 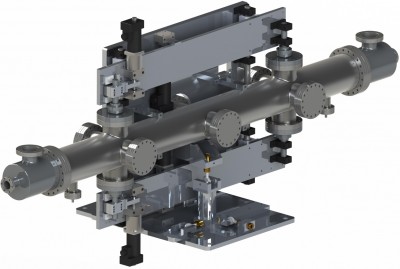 Caption: Design drawing of the outer structure of a dechirper that will be used to tweak the "color range" of light pulses from SLAC’s X-ray laser, LCLS. Two dechirpers will be lined up in front of the LCLS undulator—a magnetic structure that generates ultrabright, ultrafast X-rays from bunches of electrons. 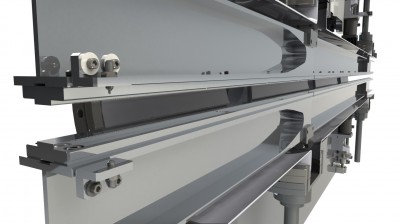 Caption: parallel, 2-meter-long, flat aluminum rails. Electron bunches will travel through a variable gap between the rails at nearly the speed of light. 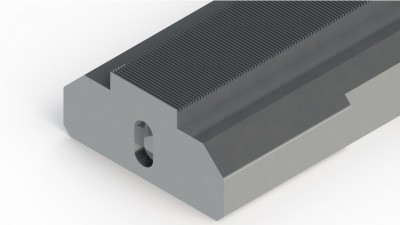 Caption: The aluminum rails have comb-like grooves that are half a millimeter deep and a quarter millimeter wide. The electron bunches "sense" the grooves, leading to a change in the energy spread of the X-rays they produce.