The prestigious award recognizes her seminal contributions to particle physics.

Helen Quinn answers the question “What moment in your career are you most proud of?” The interview was recorded at the California STEM Summit 2012 in San Diego. 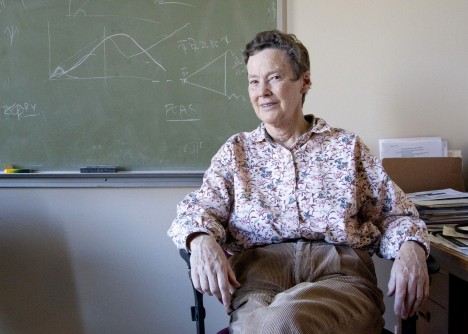 Helen Quinn, a professor emerita at SLAC and Stanford, will receive the 2018 Benjamin Franklin Medal in Physics.

Newswise — Helen Quinn, a professor emerita at the Department of Energy’s SLAC National Accelerator Laboratory and Stanford University, will receive the 2018 Benjamin Franklin Medal in Physics – one of eight prestigious Franklin Institute Awards that will be handed out in Philadelphia next April.

The award recognizes Quinn’s accomplishments in the field of particle physics, in particular her pioneering efforts in developing a unified theory of the electromagnetic, weak and strong interactions – three of the four known fundamental forces in the universe.

Founded in 1824, the Franklin Institute is one of the oldest centers of science education and development in the U.S. and has a long tradition of recognizing and encouraging outstanding accomplishments in science and technology. The 2018 recipients join a long list of illustrious laureates whose discoveries and innovations have transformed our world, including Nikola Tesla, Marie and Pierre Curie, Thomas Edison, Albert Einstein, Stephen Hawking, Jane Goodall and Bill Gates.

“I’m greatly honored to have my name added to such a distinguished list of scientists,” Quinn said.

SLAC Director Chi-Chang Kao said, “In addition to being a leader in her field, Helen has relentlessly worked to further education in science and technology and to give back to the global scientific community. She has set an example for future generations of researchers, and I congratulate her on behalf of the entire lab.”

Quinn’s career in particle physics began at Stanford in the 1960s, where she completed her bachelor’s, master’s and PhD degrees in physics. At the same time, SLAC – then the Stanford Linear Accelerator Center – was building the world’s longest linear accelerator for unprecedented explorations of the subatomic world.

“Really, the beginning was the fact that particle physics was bubbling at that time at Stanford, and that’s where I got hooked on it,” Quinn said in a 2015 article in Symmetry magazine.

After graduating from Stanford, Quinn pursued research at the German research center DESY and at Harvard University. In 1979, she joined the permanent scientific staff at SLAC.

In addition to the work on “grand unified theories” cited by the Franklin Institute, Quinn also studied particle interactions that involve fundamental bottom quarks – processes that could help explain why there is more matter than antimatter in the universe.

Another famous contribution to particle physics is a theory she developed with Roberto Peccei from the University of California, Los Angeles, which offered a solution to problematic predictions arising from the theory of the strong nuclear force, such as electrical properties of neutrons that are not observed in experiments. Other scientists immediately realized that the Peccei-Quinn theory also suggests the existence of a new, yet-to-be-found particle, called the axion, which could potentially account for dark matter, the mysterious substance that makes up 85 percent of all matter in the cosmos.

“Helen has made numerous important contributions to our understanding of very fundamental processes, which has changed the way we think about nature,” said JoAnne Hewett, head of SLAC’s Fundamental Physics Directorate. “She has had tremendous impact on the advancement of particle physics at SLAC and around the world, and it’s exciting to see it being widely recognized.”

But research isn’t Quinn’s only calling. For the past 30 years, she has also championed science education and outreach in the nation and abroad – activities that include her role as the chair of a National Research Council committee that produced “A Framework for K-12 Science Education,” an influential report that served as the basis for the 2013 Next Generation Science Standards. Although Quinn retired in 2010, science education remains a primary focus for her.

The Franklin Award is the latest in a list of accolades Quinn has received for her work, including the 2000 Dirac Medal, the 2013 J.J. Sakurai Prize for Theoretical Particle Physics and the 2016 Compton Medal.