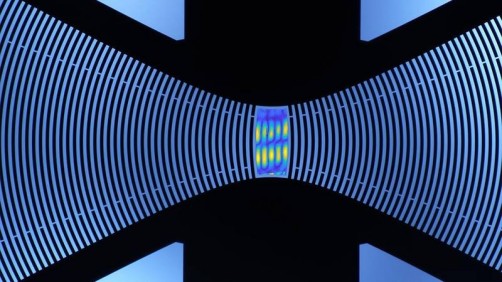 An x-ray image of sound waves.

Newswise — Some quantum computers and networks store their information in an electron’s spin, which can be up or down – like the zeros or ones in a conventional computer. They can also be a combination of both up and down. One way to manipulate the electron spins may be through using sound waves. The first challenge in this study was to prime the spins so they were ready. Scientists built a system with curved electrodes to concentrate the sound waves. This is like using a magnifying lens to focus a point of light. Unique x-ray microscopy instrumentation allowed researchers to directly watch atoms move in a quantum material as sound waves passed through them.

Researchers invented a unique way for different types of quantum technology to “talk” to each other using sound. For part of the work, they used the Center for Nanoscale Materials (CNM) and the Advanced Photon Source (APS), both DOE user facilities. The study provides a step towards bringing quantum technology closer to reality.

Communicating quantum information is a challenging task. It is difficult to move information stored in electron spin within a device. However, since different quantum systems represent quantum information in different ways, combining more than one type into a hybrid system could take advantage of the strengths of each one. For instance, optical photons can send quantum states across long distances. An electron’s spin state can store information, which allows scientists to expand the binary information storage system used in traditional computing. In this study, researchers created a hybrid quantum system that acoustically drives transitions in electron spins. The experiment showed a basis for mechanical (strain) control. Scientists then developed a theoretical model from a combination of direct experimental observation and density functional theory calculations. From all of this information, they illustrated different types of mechanical strain that drive longer-lasting spins. The material studied was silicon carbide, which has been shown recently to support long-lived spin states that can be accessed optically. The results offer theoretical understanding and experimental demonstrations of controlling the spin states in silicon carbide and provide a basis for applications in long-distance quantum communication, new approaches to quantum computation, as well as potential quantum sensing with MEMS – microelectromechanical systems.