6-May-2021 10:05 AM EDT, by Princeton Plasma Physics Laboratory
favorite_border 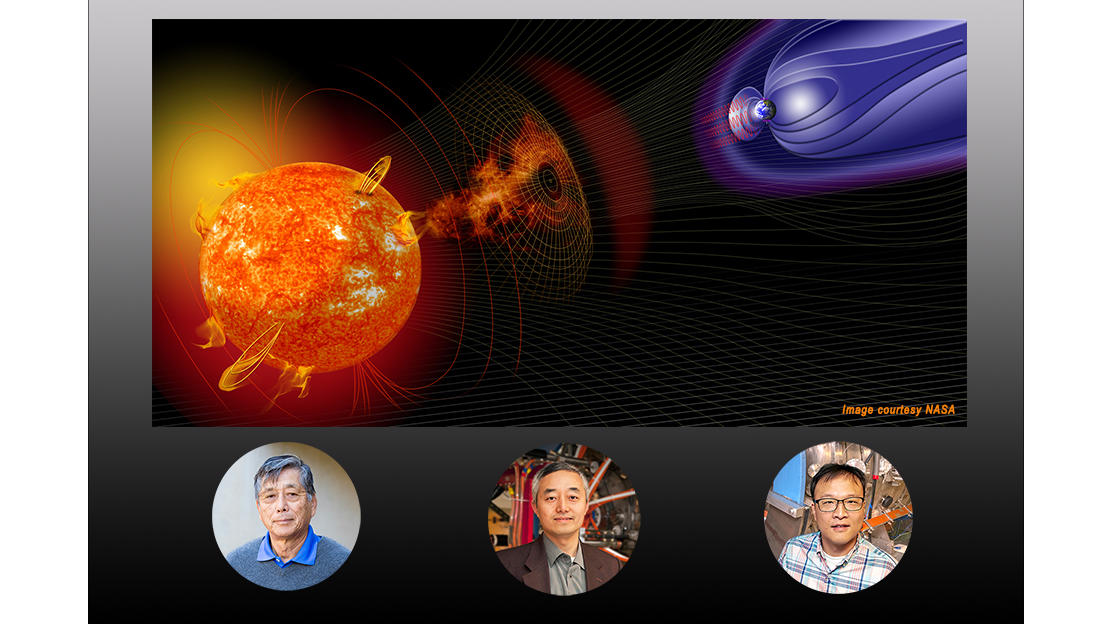 Newswise — Scientists at the U.S. Department of Energy’s (DOE) Princeton Plasma Physics Laboratory (PPPL) have been awarded three grants from the National Aeronautics and Space Administration (NASA) totaling over $2 million to conduct research that could help predict the potentially damaging effects of blasts of subatomic particles from the sun.

The three-year grants will fund research into a process known as magnetic reconnection, the coming together and explosive separation of magnetic field lines in plasma, that occurs throughout the universe. Scientists conjecture that magnetic reconnection helps cause the blasts, which produce vast amounts of electrically charged subatomic particles known as plasma. The onrush of particles, part of what is known as space weather, can interfere with communications satellites and electrical grids on Earth.

The grants will also support research into a type of plasma blob that can periodically bubble up on the solar surface and emit an energetic variety of x-ray light.

Yoo and a researcher from the University of Maryland-College Park will analyze data produced by NASA’s Magnetospheric Multiscale Mission (MMS), a group of four spacecraft flying in formation to study reconnection in the magnetosphere, the magnetic field that surrounds Earth. The team will determine which MMS information could be important to consider for laboratory experiments using PPPL’s Magnetic Reconnection Experiment (MRX), a device resembling an enormous silvery barrel tipped on its side.

Using MRX, the team hopes to recreate conditions in the magnetosphere that occur in conjunction with reconnection and study which phenomena might be responsible. Yoo’s hunch is that lower hybrid drift waves could heat electrons in the plasma and cause the onset of fast magnetic reconnection. “We would be thrilled if we could eventually say that if you detect these waves in space, you could reasonably predict that reconnection will follow.”

This research follows up experiments from 20 years ago, when scientists came to a different conclusion. “We first observed these waves in MRX in 2001 and in 2010 concluded that they did not contribute much to reconnection,” said principal PPPL physicist Hantao Ji, a professor of astrophysical sciences at Princeton University and recipient of a grant for related research. “Now, 10 years later, we found that the waves can indeed be important under certain conditions. So, we decided to revisit the same subject after a 20-year hiatus but under new conditions and with new data from both MMS and MRX.”

The third grant was awarded to PPPL principal physicist Masaaki Yamada, distinguished research fellow and principal investigator of the MRX. He will use the grant to run tests using MRX to determine whether a kind of magnetic configuration could help explain the blobs of plasma that bubble up on the sun’s surface and emit x-ray light.

Yamada and his research team will shoot a smoke-ring-shaped puff of plasma with a pattern of magnetic fields known as a spheromak into MRX using a kind of gun. They will then study the plasma to determine whether it emits high-energy particles, like x-rays.

The spheromak was originally designed for fusion reactors. “I worked on the concept almost 30 years ago,” said Yamada. “We confirmed that a device based on the spheromak idea could help lead to fusion. We built a device known as S-1, but it did not confine the plasma well.”

Now, the spheromak concept has reappeared as a possible explanation for solar events. “Dr. Spiro Antiochos from NASA Goddard gave a talk at PPPL a few years ago about giant, dome-shaped flares the size of Earth that appear on the sun and emit x-rays,” Yamada said. “No one has yet discovered a clear mechanism to explain why these emissions happen. Since the spheromak configuration can occur in nature, I thought similar configurations on the sun might spur these blobs to form.”

After the talk, Yamada, PPPL physicist Elena Belova and undergraduate Princeton University student Joshua Latham ran computer simulations investigating whether the spheromak magnetic configuration could lead to x-ray emitting blobs that occur on the sun, and confirmed that they could. The team will use their grant to conduct real-life experiments verifying the simulation results using MRX.

Unlike tokamaks, a popular type of fusion reactor shaped like a doughnut that is used around the world, a spheromak does not have a central hole for a large magnet that creates magnetic fields to help confine the plasma. Instead, a spheromak is more like a unitary fireball and creates necessary magnetic fields from the electrical currents that naturally flow through it.

The three grants will extend PPPL’s extensive history in space and astrophysical research involving reconnection. The Laboratory, which has been collaborating with the MMS mission since it launched in 2015, is now installing the Facility for Laboratory Reconnection Experiment (FLARE), a new and more powerful version of MRX. The $4.3 million device will probe facets of magnetic reconnection that have never before been accessible to laboratory experiments.