5-May-2017 10:05 AM EDT, by Brookhaven National Laboratory
favorite_border 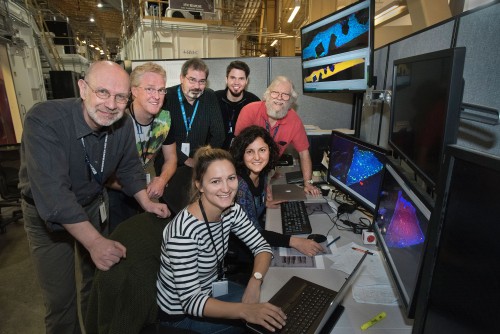 Using Maia to "chemically fingerprint" mineral deposits: This false-color image represents rubidium (red), iron (green), and chromium (blue) in a mineral sample from the Noril'sk deposit in Siberia, the world's largest mining resource for nickel. The picture size is 10.5 millimeters by 5.1 millimeters, 3751 x 1822 pixels, with a scan time of just 0.8 milliseconds per pixel. 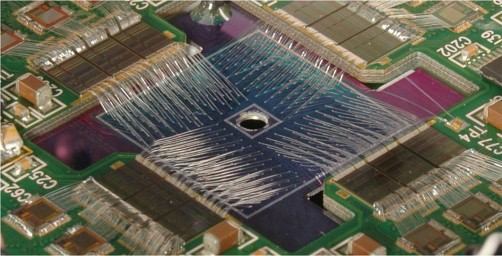 Image of the heart of the Maia detector, a two-inch wide chip with 384 silicon detector elements in an 20 x 20 arrangement, each connected to its own readout amplifier. The central hole lets incident x-rays pass through to be focused onto the sample, which allows the detector to be very close to the sample.

Newswise — The National Synchrotron Light Source II (NSLS-II), a DOE Office of Science User Facility at the U.S. Department of Energy’s Brookhaven National Laboratory, is a truly international resource. Geoscientists from Australia and France recently trekked across the globe to aim NSLS-II’s tiny, intense beams of x-ray light at thin samples of nickel-rich mineral gathered from a mine in far-off Siberia. They scanned these slices of geological material to see what other chemical elements were associated with the nickel. The group also examined slices of minerals grown in a lab, and compared results from the two sample suites to learn how massive metal deposits form.

Their experiment was the first to use a newly installed x-ray detector, called Maia, mounted at NSLS-II’s Submicron Resolution X-Ray Spectroscopy (SRX) beamline.  Scientists from around the world come to SRX to create high-definition images of mineral deposits, aerosols, algae—just about anything they need to examine with millionth-of-a-meter resolution. Maia, developed by a collaboration between NSLS-II, Brookhaven’s Instrumentation Division and Australia’s Commonwealth Scientific and Industrial Research Organization (CSIRO), can scan centimeter-scale sample areas at micron scale resolution in just a few hours—a process that used to take weeks.

“The Maia detector is a game-changer,” said Juergen Thieme, lead scientist at the SRX beamline. “Milliseconds per image pixel instead of seconds is a huge difference.”

SRX beamline users now have time to gather detailed data about larger areas, rather than choosing a few zones to focus on. This greatly enhances the chance to capture rare “needle in a haystack” clues to ore forming processes, for example.

“This is important when you are trying to publish a paper,” said Thieme. “Editors want to make sure that your claim is based on many examples and not one random event.”

“We’ve already gathered enough data for one, if not two papers,” said Margaux Le Vaillant, one of the visiting users from CSIRO and principal investigator for this experiment.

Collaborator Giada Iacono Marziano of the French National Center for Scientific Research added, “Because we can now look at a larger image in detail, we might see things—like certain elemental associations—that we didn’t predict.” These kinds of surprises pose unexpected questions to scientists, pushing their research in new directions.

Siddons and his collaborators at Brookhaven Lab and CSIRO have provided Maia detectors to synchrotron light sources around the world—CHESS at Cornell University in New York, PETRA-III at the DESY laboratory in Hamburg, Germany, and the Australian Synchrotron in Melbourne. The detector at SRX offers the advantage of using beams from NSLS-II, the brightest light source of its kind in the world.

When scientists shine the x-ray beams at samples, they excite the material’s atoms. As the atoms relax back to their original state they fluoresce, emitting x-ray light that the detector picks up. Different chemical elements will emit different characteristic wavelengths of light, so this x-ray fluorescence mapping is a kind of chemical fingerprinting, allowing the detector to create images of the sample’s chemical makeup.

The Maia detector has several features that help it map samples at high speeds and in fine detail.

“Maia doesn’t ‘stop and measure’ like other detectors,” said physicist Pete Siddons, who led Brookhaven’s half of the project. Most detectors work in steps, analyzing each spot on a sample one at a time, he explained, but the Maia detector scans continuously. Siddons’ team has programmed Maia with a process called dynamic analysis to pick apart the x-ray spectral data collected and resolve where different elements are present.

Maia’s analysis systems also make it possible for scientists to watch images of their samples appear on the computer screen in real-time as Maia scans. If samples are very similar, Maia will recycle the dynamic analysis algorithms it used to create multi-element images from the first sample’s fluorescence signals to build the subsequent sample’s images in real-time, without computational lag.

Part of Maia’s speed is also attributable to the 384 tiny photon-sensing detector elements that make up the large detector. This large grid of sensors can pick up more re-emitted x-rays than standard detectors, which typically use less than 10 elements. Siddons’ instrumentation team designed special readout chips to deal with the large number of sensors and allow for efficient detection.

The 20-by-20 grid of detectors has a hole in the middle, but that’s intentional, Siddons explained. “The hole lets us put the detector much closer to the sample,” Siddons said. Rather than placing the sample in front of the x-ray beam and the detector off to the side, SRX beamline scientists have aligned the beam, sample, and detector so that the x-ray beam shines through the hole to reach the sample. With this arrangement, the detector covers a wide angle and captures a large fraction of fluoresced x-rays. That sensitivity allows researchers to scan faster, which can be used either to save time or to cut back on the intensity of x-rays striking the sample, reducing any damage the rays might cause.

Siddons noted that the team is currently developing new readout chips for the detector, and incorporating a new type of sensor, called a silicon drift detector array. Together these will heighten the detector’s ability to distinguish between photons of similar energy, unfolding detail in complex spectra and making for even more accurate chemical maps.

This work is supported by the U.S. Department of Energy’s Office of Science. 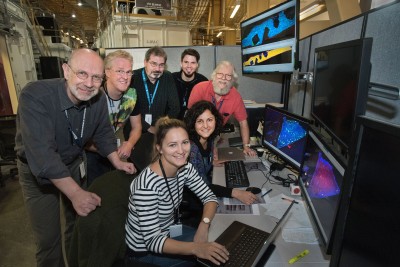 Caption: Using Maia to "chemically fingerprint" mineral deposits: This false-color image represents rubidium (red), iron (green), and chromium (blue) in a mineral sample from the Noril'sk deposit in Siberia, the world's largest mining resource for nickel. The picture size is 10.5 millimeters by 5.1 millimeters, 3751 x 1822 pixels, with a scan time of just 0.8 milliseconds per pixel. 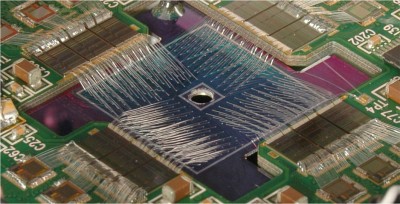 Caption: Image of the heart of the Maia detector, a two-inch wide chip with 384 silicon detector elements in an 20 x 20 arrangement, each connected to its own readout amplifier. The central hole lets incident x-rays pass through to be focused onto the sample, which allows the detector to be very close to the sample.