Scientists track down coexistence of multiple shapes in the Nickel-64 nucleus: a spherical ground state and elongated and flattened shapes. 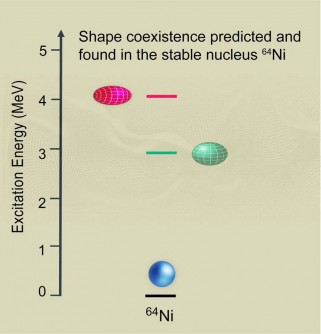 The evolution of the nuclear shape in stable Nickel-64 as predicted by large-scale nuclear model calculations. Now, new research has confirmed these three nuclear shapes.

Scientists have identified three distinct shapes in stable nickel-64, a stable isotope of nickel. These shapes appear as energy is added to the nucleus. The nucleus in the lowest-energy state is spherical. The nucleus takes elongated (prolate) and flattened (oblate) shapes as the protons and neutrons surrounding the nucleus gain energy. This change demonstrates profound changes in the way protons and neutrons can arrange themselves. This result required an orchestrated effort at four major nuclear science facilities to achieve the sensitivity needed for the experiments.

Nuclear properties are challenging to model. This difficulty comes from scientists’ incomplete understanding of the underlying force between the nucleons (positively charged protons and neutrally charged neutrons). The new calculations tie the occurrence of the so-called shape-coexistence phenomenon in nickel-64 to particular parts of the nuclear force. These observations are important benchmarks in the quest for a predictive model of nuclei. The observations advance our understanding of how the nuclear structure of atoms can change. They will also lead nuclear scientists to look for similar shape changes in the nuclei of other nickel isotopes.

Researchers combined experimental data from four nuclear laboratories (Romania’s IFIN-HH Tandem Laboratory, the French Institut Laue-Langevin, Argonne National Laboratory, and Triangle Universities Nuclear Laboratory) to establish so-called triple shape-coexistence in the stable nucleus nickel-64. The ground state is spherical, and scientists have now established an elongated (prolate) and flattened (oblate) nuclear shape at higher excitation energies.This triple shape-coexistence indicates profound changes in the way protons and neutrons can arrange themselves, even in a stable nucleus. The description of such observations constitutes a formidable benchmark for theoretical modeling of complex nuclei. In fact, some of the largest-scale nuclear model calculations performed for this nucleus tie the occurrence of this rare phenomenon to specific parts of the nuclear interaction. This increases the predictive power of such nuclear structure calculations for nuclei that can only be reached at next-generation rare-isotope facilities such as the Facility for Rare Isotope Beams.

This research was funded by the Department of Energy Office of Science, Office of Nuclear Physics; the National Science Foundation; the Office of Naval Research through the Naval Academy Research Council; and the European Commission’s Horizon 2020 Research and Innovation program.