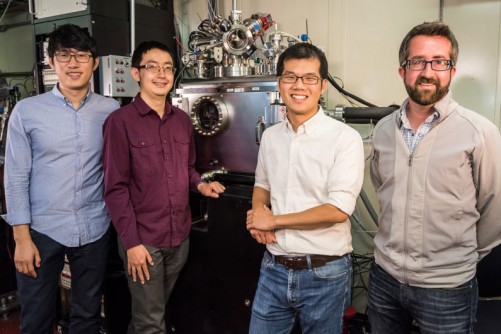 Newswise — Better batteries that charge quickly and last a long time are a brass ring for engineers. But despite decades of research and innovation, a fundamental understanding of exactly how batteries work at the smallest of scales has remained elusive.

In a paper published this week in the journal Science, a team led by William Chueh, an assistant professor of materials science and engineering at Stanford and a faculty scientist at the Department of Energy’s SLAC National Accelerator Laboratory, has devised a way to peer as never before into the electrochemical reaction that fuels the most common rechargeable cell in use today: the lithium-ion battery. See animation here.

By visualizing the fundamental building blocks of batteries – small particles typically measuring less than 1/100th of a human hair in size – the team members have illuminated a process that is far more complex than once thought. Both the method they developed to observe the battery in real time and their improved understanding of the electrochemistry could have far-reaching implications for battery design, management and beyond.

“It gives us fundamental insights into how batteries work,” said Jongwoo Lim, a co-lead author of the paper and post-doctoral researcher at the Stanford Institute for Materials & Energy Sciences at SLAC. “Previously, most studies investigated the average behavior of the whole battery. Now, we can see and understand how individual battery particles charge and discharge.”

The heart of a battery

At the heart of every lithium-ion battery is a simple chemical reaction in which positively charged lithium ions nestle in the lattice-like structure of a crystal electrode as the battery is discharging, receiving negatively charged electrons in the process. In reversing the reaction by removing electrons, the ions are freed and the battery is charged.

These basic processes – known as lithiation (discharge) and delithiation (charge) – are hampered by an electrochemical Achilles heel. Rarely do the ions insert uniformly across the surface of the particles. Instead, certain areas take on more ions, and others fewer. These inconsistencies eventually lead to mechanical stress as areas of the crystal lattice become overburdened with ions and develop tiny fractures, sapping battery performance and shortening battery life.

“Lithiation and delithiation should be homogenous and uniform,” said Yiyang Li, a doctoral candidate in Chueh’s lab and co-lead author of the paper. “In reality, however, they’re very non-uniform. In our better understanding of the process, this paper lays out a path toward suppressing the phenomenon.”

For researchers hoping to improve batteries, like Chueh and his team, counteracting these detrimental forces could lead to batteries that charge faster and more fully, lasting much longer than today’s models.

This study visualizes the charge/discharge reaction in real-time – something scientists refer to as operando – at fine detail and scale. The team utilized brilliant X-rays and cutting-edge microscopes at Lawrence Berkeley National Laboratory’s Advanced Light Source.

“The phenomenon revealed by this technique, I thought would never be visualized in my lifetime. It’s quite game-changing in the battery field,” said Martin Bazant, a professor of chemical engineering and of mathematics at MIT who led the theoretical aspect of the study.

Chueh and his team fashioned a transparent battery using the same active materials as ones found in smartphones and electric vehicles. It was designed and fabricated in collaboration with Hummingbird Scientific. It consists of two very thin, transparent silicon nitride “windows.” The battery electrode, made of a single layer of lithium iron phosphate nanoparticles, sits on the membrane inside the gap between the two windows. A salty fluid, known as an electrolyte, flows in the gap to deliver the lithium ions to the nanoparticles.

“This was a very, very small battery, holding ten billion times less charge than a smartphone battery,” Chueh said. “But it allows us a clear view of what’s happening at the nanoscale.”

In their study, the researchers discovered that the charging process (delithiation) is significantly less uniform than discharge (lithiation). Intriguingly, the researchers also found that faster charging improves uniformity, which could lead to new and better battery designs and power management strategies.

“The improved uniformity lowers the damaging mechanical stress on the electrodes and improves battery cyclability,” Chueh said. “Beyond batteries, this work could have far-reaching impact on many other electrochemical materials.” He pointed to catalysts, memory devices, and so-called smart glass, which transitions from translucent to transparent when electrically charged.

In addition to the scientific knowledge gained, the other significant advancement from the study is the X-ray microscopy technique itself, which was developed in collaboration with Berkeley Lab Advanced Light Source scientists Young-sang Yu, David Shapiro, and Tolek Tyliszczak. The microscope, which is housed at the Advanced Light Source, could affect energy research across the board by revealing never-before-seen dynamics at the nanoscale.

“What we’ve learned here is not just how to make a better battery, but offers us a profound new window on the science of electrochemical reactions at the nanoscale,” Bazant said.

Funding for this work was provided in part by the U.S. Department of Energy, Office of Basic Energy Sciences, and by the Ford-Stanford Alliance. Bazant was a visiting professor at Stanford and was supported by the Global Climate and Energy Project.