ORNL physicist aims for the stars with JENSA system 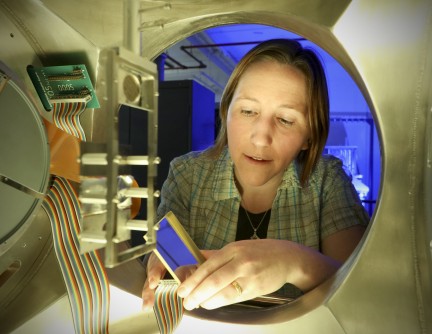 SuperORRUBA detectors like the one being connected by ORNL researcher Kelly Chipps will play a big role in the JENSA experiment at the National Superconducting Cyclotron Laboratory.

Newswise — Physicists studying stellar explosions, the origin of life and just about everything in between could gain light years in precision because of a system inspired by a team led by Kelly Chipps of the Department of Energy’s Oak Ridge National Laboratory.

As the sophistication of radioactive ion beam facilities around the world increases, there is pressure to ensure that the targets and detectors necessary to perform experiments maintain the pace. Chipps and Uwe Greife, her adviser when she was earning a doctorate at Colorado School of Mines, brainstormed to develop a better approach, and that was the inspiration for the Jet Experiments in Nuclear Structure and Astrophysics, or JENSA. Chipps describes it as using a fire hose of gas to directly measure reactions that can help physicists understand what happens in an exploding star.

Although JENSA was Greife’s idea, he enlisted Chipps to build the system, which included all of the prep work such as calculations of gas flow, component design, procurement and assembly. A few years and countless pots of coffee later, after JENSA was commissioned, Uwe turned the project over to Chipps, making her the “gas target person.” Since then, her goal has been to advance the state of the art.

“Traditional methods to measure a nuclear reaction have always involved making concessions and compromises for several reasons, and one is the inherent impurities in the targets,” said Chipps, a Liane Russell Fellow. “Essentially, as a colleague once pointed out, we have million-dollar beams and 10-cent targets.”

Instead of the commonly used thin metals and plastic foils, implanted targets and small gas cells, which contain impurities such as carbon and oxygen and easily degrade, Chipps and Greife devised an elegant solution: gas jet targets. They are dense, pure, uniform, robust and localized – all characteristics that make them ideal for next-generation astrophysics research facilities and the incredible new array of exotic isotopes available for study.

The gas jet target, originally constructed at ORNL for testing and characterization, now makes its home at Michigan State University’s National Superconducting Cyclotron Laboratory in the ReA3 reaccelerated beam hall. It will form the main target for the proposed SEparator for CApture Reactions at the Facility for Rare Isotope Beams. Together the two comprise the focus of the low energy experimental nuclear astrophysics community in the United States. For Chipps, these are exciting times.

“From a career perspective, JENSA has made a name for me,” she said. “With the building of FRIB and the future of nuclear physics in the U.S., JENSA allows me and this technology to be on the ground floor. We have the chance to change the way nuclear reactions are measured in the lab from here on out using pure, dense and localized gas targets instead of plastic foils or gas cells.”

Chipps and ORNL colleague Steven Pain, also a physicist, will be traveling to Michigan State and the National Superconducting Cyclotron Laboratory in early May for a 13-day experiment. For the first time, they and their colleagues in the JENSA collaboration (http://www.jensajet.org) will be using a pure gas like hydrogen or helium as a target for nuclear reaction studies with a radioactive beam. The experiment will also utilize an ORNL-developed array of highly segmented charged particle detectors, superORRUBA, and a new data acquisition system to handle the approximate 1,100 channels of electronics.

“If we’re successful, this will demonstrate that this is the best way to do nuclear reaction measurements from now and into the Facility for Rare Isotope Beams era,” Chipps said.

It’s a huge deal for the physicist who as a youngster dreamed of studying wolves and living in a little cabin in the woods.

“I wanted to live in the great wide wilderness,” said Chipps, who spent her sophomore and part of her junior years in high school dissecting cow eyeballs, rat intestines and whole fetal pigs. But, as a junior, an unorthodox teacher she had for an algebra-based physics course set her on the path that has taken her to Colorado, Oak Ridge and now East Lansing, Michigan – at least for a couple of weeks of some high-intensity physics experiments.

“While we were building rubber band-powered catapults and laser-mirror mazes, my friends in biology were memorizing the names of animal cell components and making flashcards to discern between kingdom, phylum and class,” Chipps said. “It was no contest.”

Chipps probably had no idea that the inspiration from those rubber bands could launch a new era in physics.

This research is funded by DOE’s Office of Nuclear Physics and the National Science Foundation. Additional funding to prepare for the experiment at the National Superconducting Cyclotron Laboratory was provided by the fellowship program through the Laboratory Directed Research and Development program

UT-Battelle manages ORNL for the DOE's Office of Science. The Office of Science is the single largest supporter of basic research in the physical sciences in the United States, and is working to address some of the most pressing challenges of our time. For more information, please visit http://science.energy.gov/. – Ron Walli, April 21, 2016

Cutline: SuperORRUBA detectors like the one being connected by ORNL researcher Kelly Chipps will play a big role in the JENSA experiment at the National Superconducting Cyclotron Laboratory. (ORNL photo by Jason Richards)