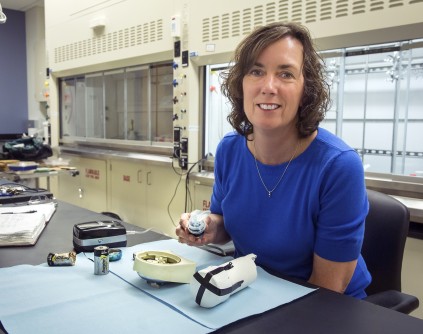 Newswise — From the bluebird painting propped against her office wall and the deer she mentions seeing outside her office window, Linda Lewis might be mistaken for a wildlife biologist at first glance. But rather than trailing animal tracks, Lewis, a researcher at the Department of Energy’s Oak Ridge National Laboratory, is more interested in marks left behind by humans.

She’s a chemist and forensic scientist, and she’s on the hunt to uncover fingerprints. Lewis applies materials science techniques to the field of forensics, and some of her research has helped crime scene investigators rebuild fingerprints after they have faded over time. Her research showed that acetic acid helped to reveal old prints, which can then be built up to a detectable level through a process that involves heating superglue, a tried-and-true technique of forensic investigators.

Initially, Lewis wasn’t shooting for a career in forensic science. During her undergraduate studies at Emory and Henry College in southwestern Virginia, she aspired to be a physician. But after entering an analytical chemistry graduate program at the University of Tennessee and later working at DOE’s Y-12 National Security Complex and ORNL, her career path shifted toward forensics, a move she has enjoyed.

“I really like helping to make a difference, and forensic science is an area where I think I can succeed in doing that,” Lewis says.

Serendipitously, Lewis’ husband, Sam, also attended the chemistry graduate program at UT and wound-up working at ORNL. Together, they’ve had the chance to collaborate on research projects at the Lab, and besides getting to work with her husband, it’s that collaboration and multidisciplinary approach that has left Lewis enthusiastic about working at ORNL.

“One thing I’ve loved about working at ORNL is that there are no research boundaries and we’ve been able to cross disciplines and build teams with many excellent researchers to tackle the hard problems.” Lewis says. “It has been very rewarding.”

While fingerprints may fade, Lewis’ excitement for her work ensures she’ll be around to bring them back to life.

“People ask me when I’m going to retire. I have a hard time seeing that,” she says.

UT-Battelle manages ORNL for the Department of Energy's Office of Science. The Office of Science is the single largest supporter of basic research in the physical sciences in the United States, and is working to address some of the most pressing challenges of our time. For more information, please visit http://science.energy.gov/. – by Chris Samoray