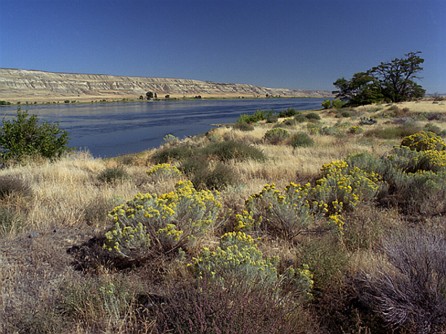 The Columbia River receives chromium-contaminated groundwater from the Hanford Site, a former nuclear materials production and processing complex in Washington State. Researchers are seeking to understand how bacteria could be used to immobilize chromium and other heavy metals to help remediate the area.

Residing in wastes from former weapons production and reprocessing activities, electroplating processes, and industrial efforts to reduce corrosion in steel pipes, hexavalent chromium contaminates soil and groundwater systems worldwide. Although hexavalent chromium is readily transported in groundwater, it can be converted into a less mobile form by bacteria. Scientists at Miami University and DOE’s Environmental Molecular Sciences Laboratory (EMSL) found that adding a specific nutrient significantly stimulates the bacteria to transform nearby iron that, in turn, reduces the chromium to a much less mobile material.

This research will aid understanding the transport of chromium in groundwater by using bacteria and various clay minerals, as well as the rate of these reactions, to immobilize chromium in the subsurface. Findings also will improve model predictions of subsurface chromium transport.

A team of scientists from Miami University and DOE’s EMSL used EMSL’s ultrasensitive microscopy and spectroscopy capabilities to understand specific details of the processes of iron conversion, a key process in reducing hexavalent chromium to trivalent chromium, which is less mobile in groundwater. Starting with the iron-reducing bacterium Geobacter sulfurreducens and ferric iron–containing clay minerals, the team found that they could provide a specific nutrient to the bacterium that would significantly stimulate it to reduce ferric to ferrous iron. The resulting ferrous iron reduced hexavalent chromium. The bacterium reduced the chromium even faster as the temperature of the system was increased. In addition to demonstrating a possible way to reduce the transport of hexavalent chromium in groundwater, the team also determined the kinetics of these reactions. These kinetic parameters can now be incorporated into models to improve predictions of the transport of hexavalent chromium in subsurface environments.

This research was supported by the Subsurface Biogeochemical Research (SBR) program of the Office of Biological and Environmental Research within the U.S. Department of Energy’s (DOE) Office of Science (Grant DE-SC0005333). A portion of the research was performed using a DOE Office of Science user facility, the Environmental Molecular Sciences Laboratory, located at the Pacific Northwest National Laboratory in Richland, Washington.