Stinky Gases Emanating From Landfills Could Transform Into Clean Energy 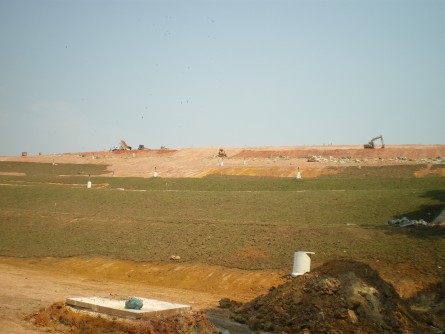 Researchers have devised a catalyst that could one day turn the smelly gases at this landfill in Niterói, Brazil, into clean hydrogen fuel.

EMBARGOED FOR RELEASE: Tuesday, Aug.12, 2014, 5 a.m. Eastern Time  Note to journalists: Please report that this research will be presented at a meeting of the American Chemical Society.

Newswise — SAN FRANCISCO, Aug. 12, 2014 — A new technique that transforms stinky, air-polluting landfill gas could produce the sweet smell of success as it leads to development of a fuel cell generating clean electricity for homes, offices and hospitals, researchers say. The advance would convert methane gas into hydrogen, an efficient, clean form of energy.

The researcher’s report is part of the 248th National Meeting of the American Chemical Society (ACS), the world’s largest scientific society.

The meeting, attended by thousands of scientists, features nearly 12,000 reports on new advances in science and other topics. It is being held here through Thursday.

Recently, hydrogen has received much attention as a clean alternative to fossil fuels, which release carbon dioxide — the main greenhouse gas — when burned. Hydrogen, however, only emits water vapor when it is burned. For this reason, some companies are developing hydrogen fuel cells for automobiles and homes.

One way to do this is to convert methane, another greenhouse gas, to hydrogen by reacting it with carbon dioxide. And smelly landfills are excellent sources of these gases — microbes living in the waste produce large amounts of methane and carbon dioxide as by-products.

But researchers have faced challenges bringing this idea to reality. For example, finding a proper catalyst has been a major hurdle, says Fabio B. Noronha, Ph.D., who is with the National Institute of Technology in Rio de Janeiro, Brazil. A catalyst is a substance that speeds up processes that otherwise would occur slowly. In this case, researchers are using catalysts to help turn methane and carbon dioxide into hydrogen and carbon monoxide. The problem is that carbon, which forms as a contaminant during the process, deposits onto the catalyst.

“The heart of the process for the production of hydrogen from landfill gas is the catalyst, and this can be disrupted by the presence of carbon,” Noronha explains. “Because of carbon deposition, the catalyst loses the capacity to convert the landfill gases into hydrogen.”

He says that to solve this problem, Noronha’s team developed a new catalyst material that removes the carbon as soon as it is formed. This approach is based on the automotive catalysts developed in the past to control car and truck emissions, he adds. The material is a perovskite-type oxide supported on ceria, which is a component of ceramics.

Right now, the researchers are working on the reaction in the laboratory, but the new, highly stable catalyst should be ideal for commercialization. As a step in that direction, the team plans to test it on a larger scale using material from a local landfill, says Noronha.

Abstract  Biomass or landfill gas (LFG) is produced by anaerobic digestion or fermentation of organic matter such as sewage sludge, MSW, etc. Biogas is a very complex gaseous mixture containing mainly CH4 and CO2, along with small amounts of N2, O2, H2S. Therefore, the emission of biogas to the atmosphere may contribute significantly to the greenhouse effect. However, only a small portion of this biogas is used. In these cases, the LFG is used for heat or electricity generation though combustion process. The production of hydrogen from LFG for energy generation by fuel cells is a promising technology. In this approach, the LFG is converted to syngas by the CO2 reforming of methane process (dry reforming of methane - DRM) followed by H2 purification steps. During the last few years, the DRM has been intensively investigated for the production of synthesis gas [1]. One of the main barriers of the dry reforming technology is the catalyst deactivation that occurs due to carbon deposition during the high temperature process [2]. Therefore, the development of a catalyst resistant to carbon deposition during CO2 reforming of CH4 is one of the main issues of this technology. Ni-based catalysts have been extensively studied for the DRM due to its low cost and high activity but this metal is prone to coking. One approach to minimize or inhibit carbon formation is to control metal particle size by the appropriated selection of catalyst preparation method. Therefore, the aim of this work is to study the performance of Ni-based catalysts prepared from perovskite precursor for the production of hydrogen through DRM. The biogas was produced at the sanitary landfill of Morro do Céu, situated in Niterói – Brazil.