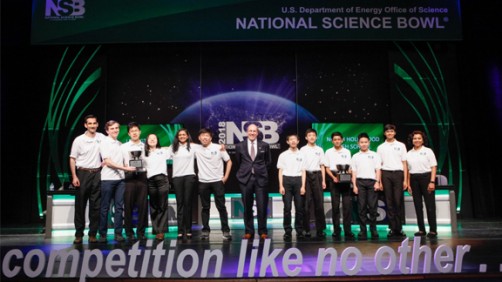 The winners of the 2018 U.S. Department of Energy (DOE) National Science Bowl® (NSB).

Newswise — WASHINGTON, D.C. – Students from Lexington High School in Lexington, Massachusetts, won the 2018 U.S. Department of Energy (DOE) National Science Bowl® (NSB) today in Washington, D.C. In the middle school competition, students from Odle Middle School in Bellevue, Washington, took home first place. U.S. Secretary of Energy Rick Perry expressed his congratulations to all of the participants at the opening rounds of final competition on Friday. Under Secretary for Science Paul Dabbar also participated in the final rounds of competition this morning.

“More than 14,300 students from all 50 states, the District of Columbia, and Puerto Rico competed in this year’s National Science Bowl, yet you are the ones thus far who’ve prevailed. I congratulate you on simply having made it to today, and I wish each of you the best of success the rest of the way,” said Secretary Perry to the crowd of students on Friday. Upon completion of the final competition Monday, he added, “I’d especially like to congratulate the winning teams from Lexington High School and Odle Middle School. With cybersecurity being one focus of this year’s competition, I am confident that, as the next generation of STEM leaders to combat our Nation’s growing cybersecurity threats, you all will leave with the high confidence that you can compete in this challenging field against arguably the best minds in the world.”

The top two high school teams emerged victorious from a field of 65 high school regional champions who came to D.C. to compete in the National Science Bowl® Finals.

Lexington High School defeated North Hollywood High School from North Hollywood, California by correctly answering the physics question, “Because ATP is often used faster during muscle contraction than it can be synthesized via respiration, the human kidney and liver play roles in synthesizing what compound that is used to rapidly phosphorylate ADP back to ATP?” with the correct answer, “creatine phosphate.” The members of the winning high school team are Derik Kauffman, Ben Choi, Anka Hu, Snigdha Allaparthi, and Chanseo Lee, and they are coached by head coach Nicholas Gould and Robert Pohlman.

For winning the national championship, Lexington High School will receive a nine-day, all-expense paid science trip to Alaska. While on the trip, the students will take day trips that provide learning opportunities about glaciology, marine and avian biology, geology, and plate tectonics.

The top two middle school teams emerged victorious from a field of 48 middle school regional champions who came to D.C. to compete in the National Science Bowl® Finals. The top 16 middle school teams in the academic competition won $1,000 for their schools’ science departments, and the top three teams received trophies and individual medals.

Additional information about the teams and the National Science Bowl® is available at: http://science.energy.gov/wdts/nsb/.