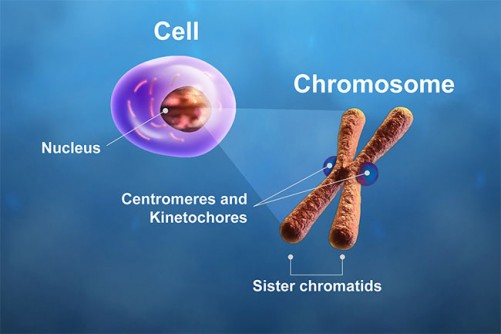 The centromeres and kinetochores of a chromosome play critical roles during cell division. In mitosis, microtubule spindle fibers attach to the kinetochores, pulling the chromatids apart. A breakdown in this process causes chromosome instability. Researchers have linked the overexpression of centromere and kinetochore genes to cancer patient outcome after adjuvant therapies. 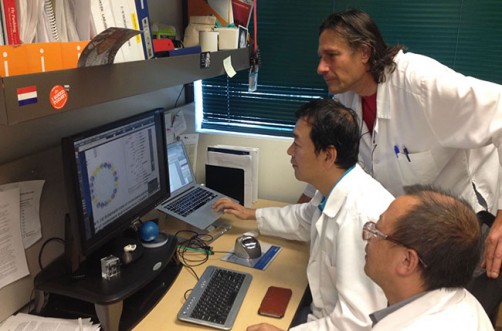 Newswise — To treat or not to treat? That is the question researchers at the Department of Energy’s Lawrence Berkeley National Laboratory (Berkeley Lab) hope to answer with a new advance that could help doctors and their cancer patients decide if a particular therapy would be worth pursuing.

Berkeley Lab researchers identified 14 genes regulating genome integrity that were consistently overexpressed in a wide variety of cancers. They then created a scoring system based upon the degree of gene overexpression. For several major types of cancer, including breast and lung cancers, the higher the score, the worse the prognosis. Perhaps more importantly, scores could accurately predict patient response to specific cancer treatments.

The researchers said the findings, to be published Aug. 31 in the journal Nature Communications, could lead to a new biomarker for the early stages of tumor development. The information obtained could help reduce the use of cancer treatments that have a low probability of helping.

“The history of cancer treatment is filled with overreaction," said the study's principal investigator, Gary Karpen, a senior scientist in Berkeley Lab’s Division of Biological Systems and Engineering with a joint appointment at UC Berkeley’s Department of Molecular and Cell Biology. "It is part of the ethics of cancer treatment to err on the side of overtreatment, but these treatments have serious side effects associated with them. For some people, it may be causing more trouble than if the growth was left untreated."

One of the challenges is that there has been no reliable way to determine at an early stage if patients will respond to chemotherapy and radiation therapy, said study lead author Weiguo Zhang, a project scientist at Berkeley Lab.

"Even for early stage cancer patients, such as lung cancers, adjuvant chemotherapy and radiotherapy are routinely used in treatment, but overtreatment is a major challenge," said Zhang. "For certain types of early stage lung cancer patients, there are estimates that adjuvant chemotherapy improves five-year survival only about 10 percent, on average, which is not great considering the collateral damage caused by this treatment.”

The researchers noted that there are many factors a doctor and patient must consider in treatment decisions, but this biomarker could become a valuable tool when deciding whether to use a particular therapy or not.

Study co-author Anshu Jain, an oncologist at the Ashland Bellefonte Cancer Center in Kentucky and a clinical instructor at the Yale School of Medicine, added that the real value of this work may be in helping doctors and patients consider alternatives to the typical course of treatment.

“These findings are very exciting,” said Jain. “The biomarker score provides predictive and prognostic information separate from and independent of clinical and pathologic tumor characteristics that oncologists have available today and which often provide only limited clinical value.”

The study authors focused on genes regulating the function of centromeres and kinetochores – the essential sites on chromosomes that spindle fibers attach to during cell division – based upon results from earlier research by the Karpen group and other labs in the field. In normal cell division, microtubule spindles latch on to the kinetochores, pulling the chromosome's two chromatids apart.

What the Karpen team previously found in fruit flies is that the overexpression of a specific centromere protein resulted in extra spindle attachment sites on the chromosomes.

"This essentially makes new centromeres functional at more than one place on the chromosome, and this is a huge problem because the spindle tries to connect to all the sites," said Karpen. "If you have two or more of these sites on the chromosome, the spindles are pulling in too many directions, and you end up breaking the chromosome during cell division. So overexpression of these genes may be a major contributing factor to chromosomal instability, which is a hallmark of all cancers."

This chromosomal instability has long been recognized as a characteristic of cancer, but its cause has remained unclear.

To determine if centromeres play a role in chromosome instability in human cancers, the researchers analyzed many public datasets from the National Center for Biotechnology Information, the Broad Institute and other organizations that together contained thousands of human clinical tumor samples from at least a dozen types of cancers. The researchers screened 31 genes involved in regulating centromere and kinetochore function to find the 14 that were consistently overexpressed in cancer tissue.

The extensive records included information on DNA mutations and chromosome rearrangements, the presence and levels of specific proteins, the stage of tumor growth at the time the patient was diagnosed, treatments given, and patient status in the years following diagnosis and treatment. This allowed the researchers to correlate the centromere and kinetochore gene expression score (CES) with patient outcomes either with or without treatments.

"We were surprised to find such a strong correlation between CES and things like whether the patient survived five years later," said Karpen. "Another finding – one that is counterintuitive – is that high expression of these centromere genes is also related to more effective chemotherapy and radiation therapy."

The researchers hypothesized that the degree of chromosomal instability may also make cancer cells more vulnerable to the effects of chemotherapy or radiation therapy.

"In other words, there's a threshold of genome instability," said Zhang. "At low to medium-high levels, the cancer thrives. But at much higher levels, the cancer cells are more susceptible to the additional DNA damage caused by the treatment. This is a really key point."

The researchers pointed out that they found no link between very high levels of genome instability and improved patient survival without adjuvant treatments.

Translating these findings into clinical advice and practice will take more research, the study authors caution. They are working to find that threshold of genome instability so that in the future, doctors and patients can make informed decisions about how to move forward.

“Future steps will include investigating the CES in prospective clinical studies for validation in carefully selected patient cohorts," said Jain. "By establishing the clinical significance of the CES, oncologists will have greater confidence in guiding cancer patients toward treatments with the greatest benefit.”

Other co-authors of the study are Jian-Hua Mao at Berkeley Lab’s Division of Biological Systems and Engineering; Wei Zhu at the Cellular Biomedicine Group in Shanghai; and Ke Liu and James Brown at Berkeley Lab's Division of Environmental Genomics and Systems Biology. Mao and Zhu provided critical expertise in bioinformatics for this research.

The National Institutes of Health supported this work. 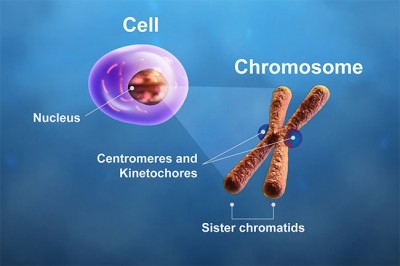 Caption: The centromeres and kinetochores of a chromosome play critical roles during cell division. In mitosis, microtubule spindle fibers attach to the kinetochores, pulling the chromatids apart. A breakdown in this process causes chromosome instability. Researchers have linked the overexpression of centromere and kinetochore genes to cancer patient outcome after adjuvant therapies. 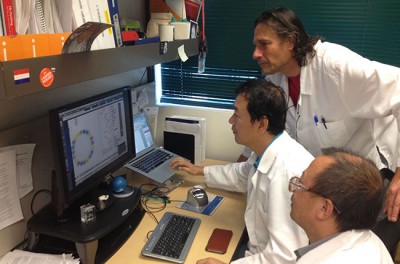