This research offers new information to understand the role of microorganisms in elemental cycling in the Arctic. 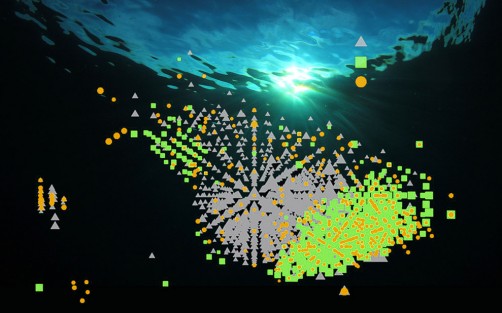 Study helps explain how sunlight alters microbial pathways and stimulates respiration in waters in the Arctic.

Sunlight and microbes found in Arctic waters interact to degrade dissolved organic carbon (DOC) that is flushed from thawing Arctic permafrost soils into surface waters. But scientists can’t predict the rate and extent of this degradation, which is key for calculating the total amount of carbon being cycled in the Arctic. This study shows that the rate at which microbes process DOC is likely governed by a combination of two factors. The first factor is the abundance and break down of DOC by sunlight. The second factor is the capacity and timescale that microbial communities have to adapt to metabolize the sunlight-exposed carbon.

This study helps explain how sunlight and microbes interact to break down DOC being flushed from thawing Arctic permafrost. The new information could help develop more accurate methods for assessing past climatic conditions, which is important for modeling carbon cycling processes in the Arctic.

Photochemical processing of dissolved organic carbon (DOC) likely supplies about one-third of the carbon dioxide released from surface waters in the Arctic, by either directly mineralizing DOC to carbon dioxide or indirectly altering DOC chemical composition and, in turn, rates of microbial respiration. At present, scientists cannot predict the rate and extent of this degradation in either dark or light conditions. A team of researchers from the University of Michigan, Woods Hole Oceanographic Institution, Oregon State University, and EMSL, the Environmental Molecular Sciences Laboratory, a DOE Office of Science user facility, combined advanced techniques to characterize microbial and DOC composition. The researchers characterized outputs of short-term photochemical experiments using Fourier-Transform Ion Cyclotron Resonance (FTICR) mass spectrometry at EMSL along with measures of microbial activity, community composition, and gene expression. In dark conditions, they found microbes native to deep permafrost or surface organic layer soils degraded the DOC that was most abundant in either soil. They found sunlight exposure either increases or decreases microbial respiration of DOC depending on whether photochemical alteration produces or removes molecules from the DOC that microbial communities used before light exposure. The sunlight-altered DOC induced changes in key metabolic steps taken by the native microbial communities to adapt to and degrade the light-altered DOC. Sunlight-driven alteration of permafrost DOC to compounds used by microbes results in a two-fold increase in respiration rates. This increase suggests that when permafrost DOC is exported to sunlit surface waters it can be rapidly respired to carbon dioxide. The coupled photochemical and biological degradation of permafrost DOC may be an increasingly important component of the Arctic carbon budget as temperatures increase. The new findings could be used to develop more accurate methods for assessing climate processes.