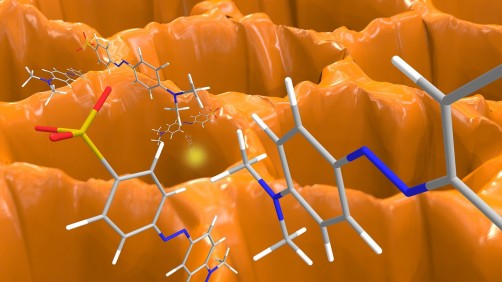 Argonne scientists have invented a membrane (shown here) that, when exposed to sunlight, can clean itself and also actively degrade pollutants.

Newswise — Argonne scientists have invented a membrane that, when exposed to sunlight, can clean itself and also actively degrade pollutants.

Critical tasks such as treating wastewater and processing petrochemicals rely on porous membranes that filter unwanted materials out of water. Over time, these membranes inevitably become clogged by bacteria or other substances, so they need to be replaced or cleaned with harsh chemicals that shorten their lifespan.

To address this problem, researchers at the U.S. Department of Energy’s (DOE) Argonne National Laboratory have invented a membrane that, when exposed to sunlight, can clean itself and also actively degrade pollutants. The advance paves the way for membranes that can last longer and perform better than those in use today, lowering costs.

"Fouling is a longstanding challenge in membrane separations," said Jeffrey Elam, a chemist in Argonne's Applied Materials division. "This unique, multifunctional membrane is one way to combat that."

The main ingredient driving this material's pollutant-fighting abilities is a coating of titanium dioxide, widely studied for the purpose because it can accelerate chemical reactions when exposed to light. Typically for titanium dioxide, that light must be ultraviolet (UV) — a limitation that increases costs and narrows its feasibility.

Argonne researchers took two important steps to achieve sunlight-activated self-cleaning. First, they added small amounts of nitrogen to the titanium dioxide, "doping" it so that visible as well as UV light would bring out its photocatalytic properties.

Second, they used atomic layer deposition (ALD), a technique for creating thin films often used in the semiconductor industry, to place the coating on the membrane. Unlike the conventional method of dipping the membrane into a solution, ALD grows the coating one molecular layer at a time. This allows all of the membrane surfaces, including the internal nanopores, to be coated uniformly and precisely.

The ALD technique helps maximize the coating's efficacy without overly narrowing the pores and thus compromising the membrane's permeability. In addition to doing its primary job of filtering, the specially coated membrane can now degrade both pore-clogging foulants and common water pollutants, including endocrine disruptors and hormones that pose health and environmental concerns.

"Almost anything that's organic will get broken down by this type of chemistry," said Seth Darling, director of the Institute for Molecular Engineering at Argonne and Argonne’s Advanced Materials for Energy-Water Systems (AMEWS) Center. "Having a way to degrade those types of pollutants into harmless species — that's important."

Part of this research was conducted at Argonne's Center for Nanoscale Materials, a DOE Office of Science User Facility. The work, which also has been described in the journal Advanced Sustainable Systems, is part of a broader effort at Argonne to develop materials that can aid in water reuse and recycling. The laboratory’s expertise in interface engineering and advanced materials makes Argonne well suited for the challenge.

The market for membranes is expected to surpass $26 billion next year, reflecting their importance across multiple industries. Making these membranes more robust and multifunctional not only eliminates the expense of cleaning or replacing them, Darling pointed out, but avoids the labor and operational costs associated with maintenance shutdowns.

Effective on just about any porous inorganic surface, Argonne's innovation could transform the next generation of membranes into self-cleaning, pollutant-eating machines.

The research was supported by Argonne’s Laboratory Directed Research and Development Program.

Organizations interested in learning about opportunities to collaborate on this and other cutting-edge water treatment technologies can contact [email protected].

About Argonne’s Center for Nanoscale Materials