Surf’s Up: Magnetic Waves on the Edge

First realization of a novel material that can conduct magnetic waves on its edge, but not within its bulk. 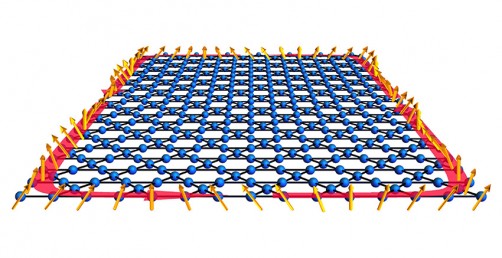 For the first time, a novel material can conduct magnetic waves only on its edge, but not within its bulk. The control and movement of magnetic fields in a material can be exploited for high performance in electronic applications. The schematic shows protected edges that allow the propagation of these magnetic waves in a single direction along the edge of the crystal. Advantageously, the waves do not scatter in the presence of any defects on the surface or within the bulk.

For the first time, a new class of magnetic materials, called topological magnon (or magnetic wave) insulators, was revealed. This novel material can conduct magnetic waves (spin waves) along their edges, without conduction through the bulk material.

This novel material has possible applications to the field of spintronics, where spin currents could be exploited for energy-efficient technologies and information storage applications.

Electrons have two fundamental properties, charge and spin, generating such phenomena as electricity, magnetism, thermal conductivity, and superconductivity in materials. Materials with topological properties have novel charge or spin excitations on their surfaces or other boundaries. Such materials are of great interest for applications in renewable energy production and high-performance computers. Recently several classes of materials with different topological properties have been theoretically predicted and a few of them validated experimentally. The experimental research by a group from Stanford University and MIT adds to the validation of one such class of material. Neutron scattering revealed novel magnets for which the magnetism is carried by spin excitations (referred to as magnons) along the edges of a crystal, even when the bulk spin excitations are not readily allowed. The scattering results can be explained by a theory based on the specific atomic arrangement and spin-orbit coupling of the atoms in the material. Spin orbit coupling is a quantum mechanical phenomenon that results from the interaction between the electron’s orbital motion in atoms and its spin orientation. Specifically, a metal-organic framework compound, copper[1,3-benzenedicarboxylate] with a unique arrangement of copper atoms in a crystal, has been shown to exhibit this novel behavior. For this material, disturbances to the electron spin orientation can propagate on the edge of the magnetic crystal, even when propagation through the bulk is blocked. Based on this novel behavior, the material is called a topological magnon insulator. This material is analogous to another class of recently discovered materials known as topological insulators that allow electronic charge conduction on the surfaces, without having charge conduction within the bulk. This novel behavior of topological magnon insulators could lead to new applications in such fields as spintronics, where spin currents (rather than charge current in electronics) could be exploited for energy-efficient technologies and information storage.