Symbiosis a Driver of Truffle Diversity

Insights from a comparative analysis of five truffle-forming fungal species 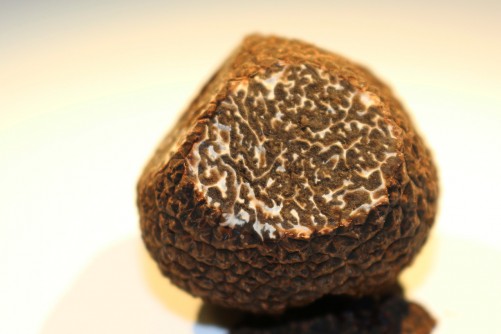 The Périgord black truffle (Tuber melanosporum) was first truffle to have its genome sequenced. Its genome was one of eight used in a comparative analysis reported in Nature Ecology & Evolution to gain insights into the ectomycorrhizal lifestyle of truffle-forming species.

Newswise — While the sight of black or white truffle being shaved over on pasta is generally considered a sign of dining extravagance, they play an important role in soil ecosystem services. Truffles are the fruiting bodies of the ectomycorrhizal (ECM) fungal symbionts residing on host plant roots. In many Ascomycota and Basidiomycota lineages, truffle-forming species have evolved independently in nearly every major group. This suggests that symbiosis drives evolution of truffle diversity and selects for specific traits.

A team led by Francis Martin and his colleagues at the French National Institute for Agricultural Research (INRA), Genoscope, and University of Torino, and including researchers at the U.S. Department of Energy (DOE) Joint Genome Institute (JGI), a DOE Office of Science User Facility, sought insights into the ECM lifestyle of truffle-forming species. As reported in Nature Ecology & Evolution, the team conducted a comparative analysis of eight Pezizomycete fungi, including four species prized as delicacies.

A Decade of ECM Symbiosis Studies

The underground networks that link ECM fungi and their host plant roots shape these ecosystems, impacting the plant’s health and tolerance to stressors such as drought or disease, as well as the global carbon cycle. Studies have suggested that ectomycorrhizal fungi may slow soil carbon cycling down by limiting nitrogen. The fungi absorb mineral nutrients from the soil and exchange them for sugars that plants produce through photosynthesis.

Through the JGI’s Community Science Program, JGI de novo sequenced the genomes of two truffle-forming fungi: the Pig truffle (Choiromyces venosus) and, the Desert truffle (Terfezia boudieri) as well as of two other Pezizomycetes not forming truffles: Ascobolus immersus and Morchella importuna. These four genomes as well as the genome of the Piedmont white truffle (Tuber magnatum) were annotated through the JGI’s pipeline. The genome of the Burgundy Truffle (T. aestivum) was sequenced by Genoscope.

The work builds on earlier fungal symbiosis studies involving the first ECM fungal genome (Laccaria bicolor, sequenced a decade ago by the JGI), and the first truffle genome (T. melanosporum) sequenced by Genoscope, which is part of this analysis. “We have learned from the Laccaria bicolor and Tuber melanosporum genome that the ECM symbiosis evolved by the massive loss of genes involved in plant cell wall degradation (CAZymes) and de novo innovation of communication proteins, such as the mycorrhiza-induced small secreted proteins controlling the host plant immunity,” said study senior author and longtime JGI collaborator Martin. In a 2015 study with the JGI, Martin and his colleagues then showed that ECM species evolved from saprotrophs that feed on decaying organic matter, and that these evolutionary patterns are present in many Basidiomycota groups.

“Here,” Martin added, “we showed that the loss of genes involved in lignocellulose/plant cell wall degradation (CAZymes) and a higher evolution rate of symbiosis-related orphan genes have shaped the genomes of pezizomycetes truffles, one of the oldest/basal clade of ectomycorrhizal Ascomycota. This means that similar evolutionary mechanisms have independently driven symbiosis in Ascomycota and Basidiomycota. We also showed that developmental and metabolic pathways expressed in ectomycorrhizal roots and fruiting bodies of the white (T. magnatum) and black (T. melanosporum) truffles are unexpectedly very similar, owing to the fact that they diverged ~100 million years ago.”

Detecting and disseminating these underground delicacies depends on trained animals scenting the distinctive odors of truffles. Martin and his team suggest the volatile organic compounds that produce these scents may also be altered by the microbial communities flourishing into truffles.

"In addition to the small secreted proteins critical for fungal interactions with their plant hosts these small molecules encoded in the truffle genomes by clusters of secondary metabolite genes offer another channel of communications between fungi and the environment," added Igor Grigoriev, the JGI Fungal Program head. He concluded: “Thus, the sequenced genomes open doors for exploration of multi-dimensional fungal plant interactions."