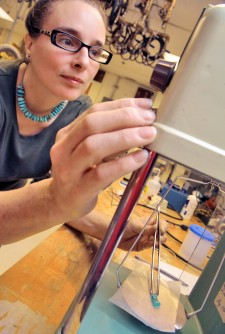 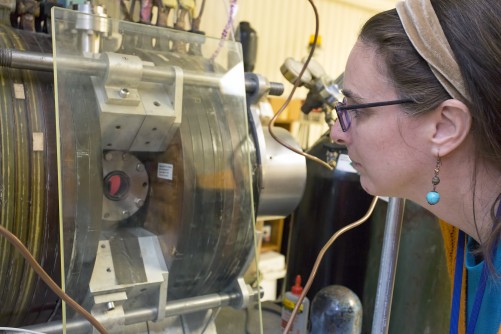 Lenore Rasmussen examines the titanium coupon being treated in an oxygen plasma at PPPL. 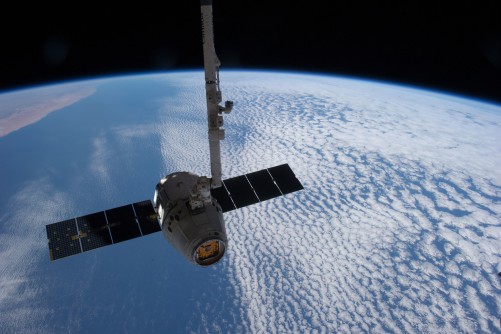 The Dragon spacecraft in orbit. 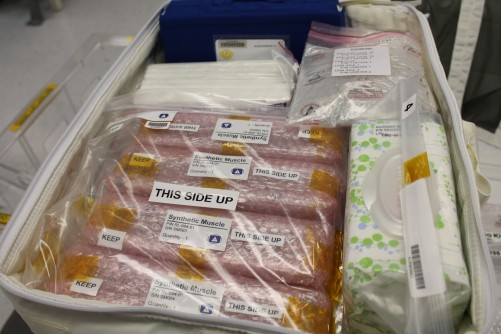 The synthetic muscle material before it was packed for transport to the International Space Station.

Newswise — Lenore Rasmussen’s dream of developing a synthetic muscle that could be used to make better prosthetic limbs and more responsive robots will literally become airborne on April 13 at 4:33 p.m. when her experiment will rocket off to the International Space Station from Cape Canaveral in Florida.

Rasmussen developed the material at RAS Labs and has worked closely with researchers and engineers at the U.S. Department of Energy’s Princeton Plasma Physics Laboratory (PPPL) to develop the material’s ability to adhere to metal. The Synthetic Muscle™ could be used in robotics in deep space travel such as travel to Mars because of its radiation resistance.

“Based on the good results we had on planet Earth, the next step is to see how it behaves in a space environment,” said Charles Gentile, a PPPL engineer who has worked closely with Rasmussen. “From there the next step might be to use it on a mission to Mars.”

Rasmussen began working with PPPL in 2007 just four years after she started Ras Labs. She received her first patent for a synthetic muscle in 1998. It is a gel-like material called an electroactive polymer that can potentially mimic human movement because it can expand and contract to simulate the movement of muscles in humans. That ability would make it very useful in robotics and in developing better prosthetic limbs.

“We can’t explore space without robots,” Rasmussen said. “Humans can only withstand a certain amount of radiation so that limits the time that people can be in space, whereas robots particularly if they’re radiation-resistant can be up there for long periods of time without being replaced.”

Lew Meixler, the long-time head of Technology Transfer at PPPL, who retired in March, said he has enjoyed helping Rasmussen follow her quest. “That’s what entrepreneurs are,” he said. “They’re the dreamers who devote all their time, energy and resources to follow their dreams.”

Rasmussen credits PPPL with providing help and support during critical points in her project. “It was and continues to be a wonderful resource not just because of the plasma physics but the people,” she said. “Charlie and Lew found ways to make things happen.”

Rasmussen solved a crucial problem at PPPL: getting the gel, which can be as soft as jelly or as hard as rubber, to adhere to the metal electrodes. Initially working with Lew Meixler on a federal Cooperative Research and Development Agreement in the Plasma Surface Laboratory, she solved the problem by treating the metal (steel or titanium) with a plasma. This changed the metal’s surface and made the gel adhere more closely to the metal

Rasmussen and Gentile found that there was no change in the strength, electroacivity, or durability of the material due to the radiation although there was a slight change in color. Tests on selected samples of the material found it was not affected by extreme temperatures down to -271 degrees Celsius, which is close to absolute zero, the coldest temperature possible in the universe.

Since then, PPPL staff members have been involved in planning for the launch. This involves mapping out each detail with military precision. Several PPPL staff members, along with Rasmussen and her staff, signed the back of the metal container or coupon holding the material. “All of the people who worked on the lab signed it and the coupon will go into space,” said Gentile. “So I’ll be up there with Gene Roddenberry.”

The Synthetic Muscle™ material will be launched on the Falcon 9, a rocket carrying the Dragon, both produced by Space X, which will carry 4,300 pounds of supplies and payloads, including material for research experiments, to the International Space Station National Laboratory. The nine-engine rocket will propel the Dragon into orbit where it will meet with the Space Station 33 hours after it is launched. Astronauts will use the station’s 57-foot arm to reach out and capture Dragon at 7:15 a.m. on April 15. Additional information about the launch is available at https://blogs.nasa.gov/spacex/2015/03/31/spacex-targeting-april-13-for-station-resupply-launch/. The material will be kept in a zero gravity storage rack in the U.S. National Laboratory on the space station for 90 days. The astronauts will photograph the materials every three weeks. When the material returns to Earth in July, it will be tested and compared with identical materials that remained on Earth. The International Space Station is an international science laboratory in low Earth orbit where astronauts conduct scientific research in biology, human biology, astronomy, meteorology and other fields in a gravity-free environment. It has operated since November of 2000 with the cooperation of the U.S., Russia, many European nations, Japan, Canada, and Brazil. It is currently staffed by two astronauts from NASA, three cosmonauts from Russia and an astronaut from the European Space Agency.

Use as a prosthetic

Rasmussen is also exploring whether Synthetic Muscle™ could be used as a prosthetic liner. The vestigial limbs of amputees can expand and contract during the day and the Ras Labs material is designed to expand and contract so it could make prosthetics more comfortable. She recently received a grant from the Pediatric Medical Device Consortium at the Children’s Hospital of Philadelphia to research this possibility.

PPPL, on Princeton University's Forrestal Campus in Plainsboro, N.J., is devoted to creating new knowledge about the physics of plasmas — ultra-hot, charged gases — and to developing practical solutions for the creation of fusion energy. Visit http://www.pppl.gov/. PPPL. Results of PPPL research have ranged from a portable nuclear materials detector for anti-terrorist use to universally employed computer codes for analyzing and predicting the outcome of fusion experiments. The Laboratory is managed by the University for the U.S. Department of Energy’s Office of Science, which is the largest single supporter of basic research in the physical sciences in the United States, and is working to address some of the most pressing challenges of our time. For more information, please visit science.energy.gov.

Lenore Rasmussen’s lifelong quest to develop a material that can be used in prosthetics began when she was growing up on a farm in West Virginia. Many people are injured, often fatally, in farm accidents, and Rasmussen’s cousin nearly lost his leg working on the farm when Rasmussen was in graduate school. That experience fueled her ambition to develop better prosthetics, and she has devoted her life to doing just that.

Rasmussen was further spurred on in her quest to develop the material when she and her family attended the 2013 Boston Marathon. Along with her husband and children, she watched the elite runners win. When her 10-year-old son reported being hungry and tired, they left the finish line observing area. The bombing occurred at that spot 22 minutes later. Seeing the many people who lost limbs during the attack, including children, made Rasmussen more determined than ever to develop advanced prosthetic limbs employing her synthetic muscle technology.

Rasmussen is a synthetic polymer chemist, who founded RAS Labs in 2003. She began working with PPPL in the early stages of the company from 2007 through 2011. Rasmussen moved to Massachusetts in 2011 and the company is now headquartered in Quincy. In 2013, she won a highly competitive grant from the Center for the Advancement of Science in Space (CASIS) to pursue the synthetic muscle experiment on the International Space Station National Laboratory (ISS-NL) through the MassChallenge global business accelerator.

She plans to attend the payload launch at the Cape Canaveral Air Force Station Kennedy Space Center with her 12-year-old son Carl, and her mother, Winola Carman. Carman lives on the family farm in Pennsboro, West Virginia, where five generations of her family have lived. Rasmussen said she wanted her mother to be there because of her years of support, including putting Rasmussen and her brothers through college. Carman did so by working nights as a nurse.

For Rasmussen, the launch is the culmination of her dreams. “It just blows my mind that humans are able to do this. It’s pretty cool,” said Rasmussen. “I’m a huge space junkie. I wish I were going with my samples!”

Rasmussen holds a PhD in chemistry, specialty polymer chemistry, from Virginia Tech and a master’s degree in biology, specialty biophysics, from Purdue University. She previously worked at Johnson & Johnson in the 1990s, and lived in Hillsborough, New Jersey, until 2011. She is the editor of “Electroactivity in Polymeric Materials,” and wrote a chapter in the book on the theory of contraction (Springer-Verlag © 2012), and has another book on electroactivity in progress. 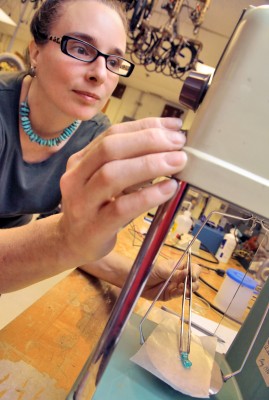 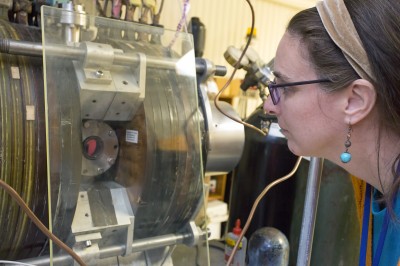 Caption: Lenore Rasmussen examines the titanium coupon being treated in an oxygen plasma at PPPL. 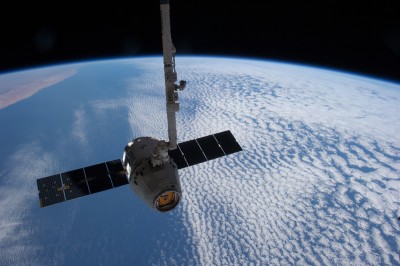 Caption: The Dragon spacecraft in orbit. 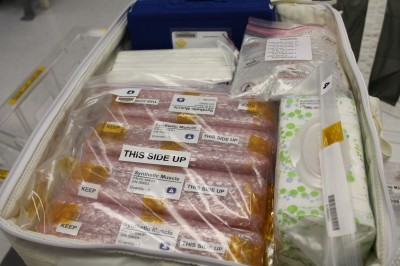 Caption: The synthetic muscle material before it was packed for transport to the International Space Station.