Theoretical modeling of energy loss in solar cells may lead to more efficient materials to convert sunlight to electricity. 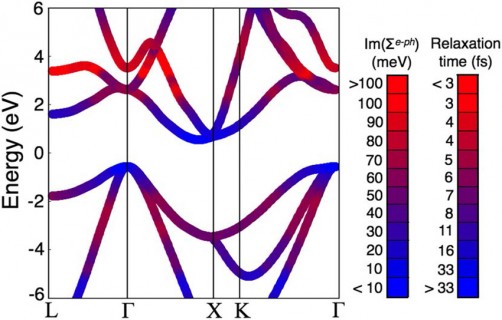 Image used with permission from Physical Review Letters. ©2014 by the American Physical Society

Absorption of sunlight in silicon solar cells results in losses due to heat from “hot” photo-excited electrons. Electrons in solids occupy energy levels called electronic bands, for example, the electronic band structure of silicon is shown. “Hot” photo-excited electrons have excess energy and lose this energy to heat rather than producing electricity. A leading mechanism of this detrimental heating consists of electron-phonon scattering processes. Colored maps of the broadening of energy levels due to scattering (in units of meV) as well as relaxation times for photo-excited electrons are overlaid on the band structure. Such new understanding of losses from heating could lead to more efficient solar cells.

When sunlight is absorbed in a solar cell, some of the energy that could be used is lost as heat. Because this complex loss process occurs in a fraction of a second, characterizing it has long been a challenge. For the first time, accurate first-principles theoretical calculations of the energy lost to heat in silicon, the primary component of solar cells, have been performed. This understanding should allow development of devices with significantly improved solar energy conversion efficiency.

Understanding how energy losses occur in materials as sunlight is converted to electricity, referred to as electron dynamics, is central to improving solar energy conversion technologies. The challenges presented by the sub-picosecond time scales and complex physics were overcome in this fundamental theoretical research, opening new avenues to guide the development of more efficient energy conversion materials.

When sunlight is absorbed in a solar cell, negatively charged electrons and positively charged holes are created which in turn drive electrical current producing power. The absorbed light produces electrons and holes with a range of energies -- those with larger energy, called ”hot” electrons and holes tend to lose their energy in the form of heat before it can be converted into an electrical current. In fact, conversion of the energy of hot carriers into heat is the main source of energy loss in solar cells. These losses are central to many energy conversion processes and occur in most electronic/optoelectronic energy conversion devices. Further, they occur at ultrafast speeds, typically less than 1 picoseond. Due to the sub-picosecond time scale and complex physics involved, characterization of hot carriers has long been a challenge even for the simplest materials. This research at Lawrence Berkeley National Laboratory provides the first ab initio calculations of hot carrier properties and dynamics in semiconductors using many-body perturbation theory without any experimentally derived parameters. Using excited-state methods and computer codes, the properties and dynamics of the hot carriers in silicon were calculated. Further, their behaviors as a function of time were tracked within the first picosecond after sunlight absorption. It was shown that the dominant loss mechanism was the creation of phonons or vibrational motion of the atom positions. These results clarify the mechanism for energy loss for hot carriers and explain previous experiments. This work opens the avenue to use ab initio calculations to interpret and guide new experiments to harness the energy from hot carriers in semiconductors and other systems and opens the door for theoretically designed new materials for efficient conversion of sunlight to electricity.