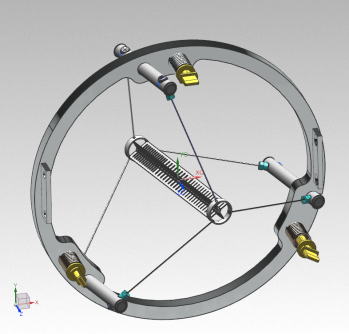 The Mu2e production target is suspended by spokes within a bicycle wheel structure.

Newswise — Before Mu2e, there was MECO.

Scientists, researchers, and engineers were ecstatic. They had been trying to carry out the Muon to Electron COnversion experiment for nearly two decades on two continents, and now it would finally be built at Brookhaven National Laboratory.

Undeterred when the project was pulled in 2005, they adjusted their plans and designs to run this groundbreaking experiment at Fermi National Accelerator Laboratory in Batavia, Illinois.

Mu2e aims to solve a mystery that has puzzled experimentalists and theorists alike since the discovery of the muon in 1936: Scientists have never observed a muon transform into its lighter cousin, the electron, without also emitting other particles.

Electrons, muons and taus are flavors of particles called leptons. Just like strawberry, chocolate and vanilla ice cream cannot transform into one another, despite being flavors of Neapolitan ice cream, muons seemingly are prevented from converting directly into electrons.

If only one in 100 million billion (1017) muons transforms into an electron, Mu2e will see it.

Before this can happen, physicists need pions.

The production target, a carefully shaped material that intercepts a particle beam, assumes that critical but difficult job. When a beam of protons hits the fixed production target, pions come out in all directions and decay almost immediately into muons, which spiral down through other components of the experiment to a detector, from which they (hopefully) emerge as electrons.

Mu2e components are made with as little material as possible because particle interactions increase with the amount of material in the experiment, interfering with the signal researchers hope to observe. This presented unique challenges to the production target design team.

Residing in a vacuum chamber inside a superconducting cylindrical magnet, the production target is subject to extreme conditions. A proton beam beats against the target every second, causing its temperature to increase to around 1,700 degrees Celsius (3,092 degrees Fahrenheit), the temperature experienced by the hottest parts of a NASA space shuttle re-entering Earth’s atmosphere.

Researchers soon realized that their initial design, a relic of the MECO experiment, was expensive. Too expensive. A gold rod encased in a titanium jacket, this target needed to be cooled with circulating water via an elaborate system of water pumps, nozzles and other infrastructure.

“That was when some of our colleagues pointed out that we may not need to actively cool the target at all,” said Steve Werkema, accelerator upgrade manager for Mu2e.

Two modifications – switching to a target that releases heat on its own, called a radiatively cooled target, and reducing beam power from 25 kilowatts to 8 kilowatts – not only saved money and simplified infrastructure but also reduced safety concerns.

Now, researchers needed a new production target. For the target material, they turned to a section of the periodic table known as the refractory metals. Refractory metals are advantageous in experiments like Mu2e because they have high melting points and are averse to corrosion even under high temperatures.

The researchers ultimately chose tungsten, a heavy, dense metal that can withstand high temperatures and brutal pounding by bunches of proton beam. This decided, it was back to the drawing board, literally.

The first Mu2e tungsten target looked like a thick, long pencil. Six millimeters (around 0.25 inches) in diameter and 160 millimeters (a little over 6 inches) long, the tungsten rod produced lots of pions.

The problem? There was no way to support this structure in vacuum.

To solve this conundrum, researchers attached parts that look like megaphones to both ends of the rod. Spaghetti-like spokes suspended these components in a bicycle ring structure that secures the target and assists a robotic arm with target removal and disposal.

“That’s when we started discovering problems that we had to overcome, one by one,” Werkema said.

The first problem they encountered was corrosion.

Ordinarily, tungsten is corrosion-proof, but studies showed that even the tiniest bit of oxygen in the vacuum chamber causes problems at Mu2e temperatures and pressures.

“Think about it like your car. Fenders rust and you get these big pieces of rust that fall off, and pretty soon you have no fender left,” said Dave Pushka, lead production target engineer at Fermilab.

The production target would corrode so fast that it wouldn’t last a year. Researchers improved the vacuum chamber to mitigate this effect. While they still anticipate some tungsten-oxide formation, it shouldn’t be enough to cause the target to fail quickly.

The researchers then wondered: How long could a proton beam bombard the target before it failed due to stress and fatigue? In an important milestone, Rutherford Appleton Laboratory researchers in England developed a prototype target and hit it with an electrical pulse until it failed. They concluded that, at least from that failure mode, the target would last more than a year.

The third challenge was temperature. Researchers were concerned that the target might deform like a stick of butter at a July picnic before reaching its prescribed lifetime (about 43 weeks of beam time).

As protons hit the production target, kinetic energy turns into heat, causing the target to expand outwardly and sag in the middle. This instability causes yet more sagging, as the spokes that support the target pull its ends together, putting more force on both ends and making the target sag further.

People on both sides of the Atlantic worked in friendly competition to develop the best target model. Ultimately, several design elements, such as springs connecting the spokes to the bicycle ring, were introduced to combat fatigue and target sag.

In its current version, the target still looks very much like an unsharpened pencil. It is gray, relatively heavy, and 200 millimeters (nearly 8 inches) long, with cylindrical rings on each end, fins that dissipate heat from the target core and brace against sag and empty space separating segments of the central rod.

The fins, which make the target look like a star from the ends, require finesse to function as intended under the harsh proton beam.

“As you add more fins, the surface of a fin doesn’t see cooler temperatures. It instead sees another fin at the same hot temperature. This means that there are some diminishing returns in terms of fin structure and number and heat dissipation,” Pushka said.

Mu2e Project Manager Ron Ray of Fermilab suggested that segmenting the target’s core could ameliorate this temperature-dependent issue. The researchers have found that introducing spaces between short, cylindrical segments of tungsten allows them to fine-tune temperatures along the target.

The gatekeepers of optimal target design

Meanwhile, three teams of engineers work to eliminate as many surprises as possible at beam-on.

“The production target team wants to know what happens with each change to the target or beam,” said Kevin Lynch, professor of physics at York College of the City University of New York and Mu2e production target design team member. “Our models track everything from pion production to muon-to-electron conversions to the way energy accumulates in components throughout the experiment.”

These independent calculations, performed by Lynch’s team at York College and Bob Bernstein’s team at Fermilab, are what senior engineer Ingrid Fang works with.

Fang, who has worked at Fermilab for over two decades, applies Lynch’s calculations to the geometry provided by Pushka, sets up the model, and solves for stress and temperature at every point in the target. The simulations are so complex it takes a supercomputer three or more days to solve the millions of equations.

“We have to find that sweet spot between temperature and muon yield,” Fang said.

“Now, it’s the grand finale,” Fang says of the current design. “We combined the target with its supporting structure and put all the loads, including beam pulsing, radiation load, gravity, and pre-tension on the bolts that secure the system, into the model, and the results look very promising.”

Researchers know that life in the lab is full of ups and downs, tinkering and revision. What originally started as a gold, water-cooled rod has evolved into a segmented and finned, radiatively cooled, tungsten apparatus that meets project goals. Scientists, researchers, engineers and analysts have looked at more than 35 target designs over the years.

The researchers remain undaunted as they now face the latest challenge – actually building the production target.

“Tungsten is difficult to machine. You can’t cut it with a lathe. You can’t saw it. It has to be ground or electrode discharge machined,” Pushka said. He notes that there are at least three or four contractors in the Chicagoland area, and more beyond, who can perform this intricate work.

Werkema and Pushka estimate that the target will take 12 weeks to manufacture and another 12 weeks to assemble and align with the beam. Then, after Mu2e construction finishes in 2022, there’s another year of setup, measurements and calibration required before the experiment starts running in 2023.

“That seems like a long time away, but it seems like no time at all when you consider the first designs were made in the late 1990s. Right now, it feels like we’re finishing up because we overcame all of these engineering and design challenges, and now new stuff shows up and gets installed every week. You can actually see the progress,” Werkema says.

“I’ve worked on a lot of experiments at Fermilab,” Pushka said. “Mu2e is the hardest, most difficult experiment I’ve ever worked on and, I think, that we have ever tried to pull off. It’s extremely difficult from the science and engineering point of view.”

It seems that the researchers, for now, are on target to discover new physics through Mu2e.

This work is supported by the U.S. Department of Energy Office of Science.