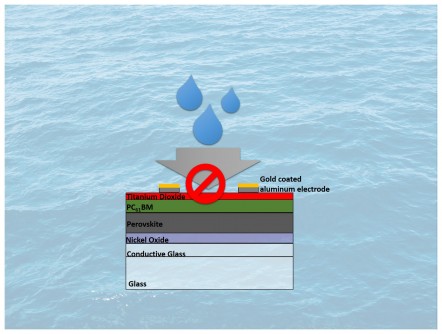 The perovskite device is made of different layers, each of which has a specific function. Together, the titanium dioxide and PC61BM layers protect the perovskite from heat and water. 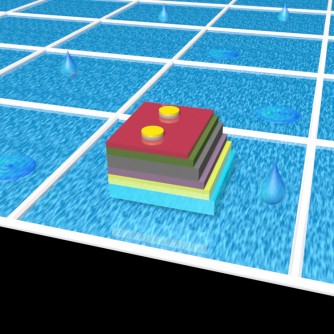 Newswise — Harvesting sunlight and using it to power our homes and devices is a reality today. Generally, most commercial solar cells are made of silicon. However, as highlighted previously, a type of material called perovskite halides are a potential competitor of silicon. Unfortunately, most perovskite halides are sensitive to moisture and high temperatures such that exposure to either will quickly degrade these materials — rendering them useless. Researchers at the Argonne-Northwestern Solar Energy Research Center (ANSER) have developed a way to protect perovskites from water and stabilize them against heat. By carefully growing an ultrathin layer of metal oxide on a carbon coating, the researchers made a perovskite device that worked even after dousing the device with a stream of water.

Solar cells are made up of layers, each with a specific duty. The perovskite layer absorbs sunlight, which can excite an electron. The electron could go right back to where it started, unless it can be extracted out of the absorbing layer quickly. For this device, the researchers placed a layer of PC61BM, a carbon-based material, on top of the perovskite, which has two roles. First, PC61BM is good at extracting electrons once they are excited by sunlight. Second, the PC61BM layer protects the perovskite from water vapor, which is one of the reactants used for forming the final protective coating  — titanium dioxide.

On top of the titanium dioxide, aluminum electrodes were deposited and protected by a thin layer of gold. On the opposite side of the perovskite, the team placed a nickel oxide layer that is good at extracting the positively charged holes left by the electrons. Glass, coated with a conductive film, is used as a support that allows light to pass through and a circuit to be formed.

The device held up to pure water and a temperature of 100 °C (around 200 °F) thanks to the titanium dioxide layer. In Soo Kim, a postdoctoral fellow and lead researcher, explained that he was excited about this result. “The key challenge to commercialization of any halide perovskite-based devices is the environmental stability.”

Many people have been studying perovskite halides, but the stability under real-world environmental situations has been largely overlooked. Kim's work is one of the first examples of protecting perovskite from liquid water with an ultrathin metal oxide layer. Alex Martinson, who directed the work, said, “It is surprising when something simple works so well.”

Martinson explained that perovskite solar cells have a lot of promise because they have the potential to be cheaper than the current commercial devices, such as silicon. The silicon manufacturing process is energy intensive, and silicon materials are required to be highly pure. In contrast, there are many pathways to make perovskites, and the performance of perovskite devices are less sensitive to impurities. Scientists at ANSER are excited to continue to explore what perovskites can do. Enabling these devices to withstand water and heat is a big step towards being able to buy a perovskite device at a local hardware store.

This item, written by Rebecca Palmer, is part of Frontiers in Energy Research, a newsletter for the Energy Frontier Research Centers created by early career members of the centers. See http://www.energyfrontier.us/newsletter/ 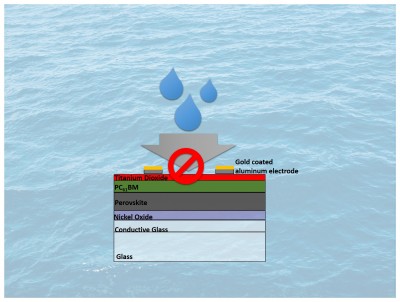 Caption: The perovskite device is made of different layers, each of which has a specific function. Together, the titanium dioxide and PC61BM layers protect the perovskite from heat and water. 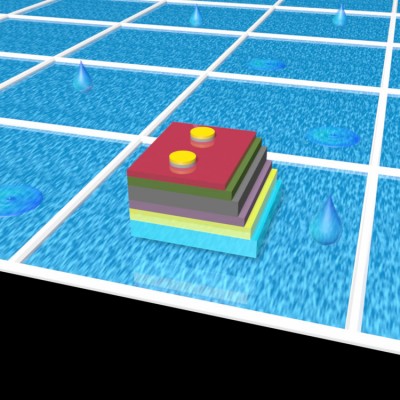