Team Announces Breakthrough Observation of Mott Transition in a Superconductor 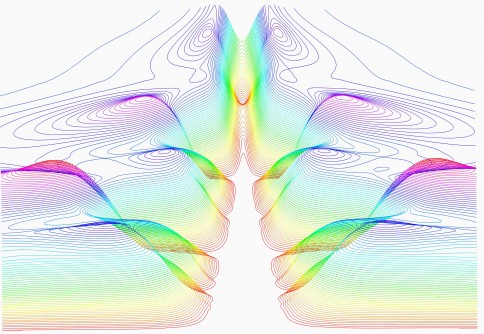 Scientists announced the first observation of a dynamic vortex Mott transition, which experimentally connects the worlds of quantum mechanics and classical physics and could shed light on the poorly understood world of non-equilibrium physics.

Newswise — An international team of researchers, including the MESA+ Institute for Nanotechnology at the University of Twente in the Netherlands and the U.S. Department of Energy’s Argonne National Laboratory, announced today in Science the observation of a dynamic Mott transition in a superconductor.

The discovery experimentally connects the worlds of classical and quantum mechanics and illuminates the mysterious nature of the Mott transition. It also could shed light on non-equilibrium physics, which is poorly understood but governs most of what occurs in our world. The finding may also represent a step towards more efficient electronics based on the Mott transition.

Since its foundations were laid in the early part of the 20th century, scientists have been trying to reconcile quantum mechanics with the rules of classical or Newtonian physics (like how you describe the path of an apple thrown into the air—or dropped from a tree). Physicists have made strides in linking the two approaches, but experiments that connect the two are still few and far between; physics phenomena are usually classified as either quantum or classical, but not both.

One system that unites the two is found in superconductors, certain materials that conduct electricity perfectly when cooled to very low temperatures. Magnetic fields penetrate the superconducting material in the form of tiny filaments called vortices, which control the electronic and magnetic properties of the materials.

These vortices display both classical and quantum properties, which led researchers to study them for access to one of the most enigmatic phenomena of modern condensed matter physics: the Mott insulator-to-metal transition.

The Mott transition occurs in certain materials that according to textbook quantum mechanics should be metals, but in reality turn insulators. A complex phenomenon controlled by the interactions of many quantum particles, the Mott transition remains mysterious—even whether or not it’s a classical or quantum phenomenon is not quite clear. Moreover, scientists have never directly observed a dynamic Mott transition, in which a phase transition from an insulating to a metallic state is induced by driving an electrical current through the system; the disorder inherent in real systems disguises Mott properties.

At the University of Twente, researchers built a system containing 90,000 superconducting niobium nano-sized islands on top of a gold film. In this configuration, the vortices find it energetically easiest to settle into energy dimples in an arrangement like an egg crate—and make the material act as a Mott insulator, since the vortices won’t move if the applied electric current is small.

When they applied a large enough electric current, however, the scientists saw a dynamic Mott transition as the system flipped to become a conducting metal; the properties of the material had changed as the current pushed it out of equilibrium.

The vortex system behaved exactly like an electronic Mott transition driven by temperature, said Valerii Vinokur, an Argonne Distinguished Fellow and corresponding author on the study. He and study co-author Tatyana Baturina, then at Argonne, analyzed the data and recognized the Mott behavior.

“This experimentally materializes the correspondence between quantum and classical physics,” Vinokur said.

“We can controllably induce a phase transition between a state of locked vortices to itinerant vortices by applying an electric current to the system,” said Hans Hilgenkamp, head of the University of Twente research group. “Studying these phase transitions in our artificial systems is interesting in its own right, but may also provide further insight in the electronic transitions in real materials.”

The system could further provide scientists with insight into two categories of physics that have been hard to understand: many-body systems and out-of-equilibrium systems.

“This is a classical system that which is easy to experiment with and provides what looks like access to very complicated many-body systems,” said Vinokur. “It looks a bit like magic.”

As the name implies, many-body problems involve a large number of particles interacting; with current theory they are very difficult to model or understand.

“Furthermore, this system will be key to building a general understanding of out-of-equilibrium physics, which would be a major breakthrough in physics,” Vinokur said.

The Department of Energy named five great basic energy scientific challenges of our time; one of them is understanding and controlling out-of-equilibrium phenomena. Equilibrium systems—where there’s no energy moving around—are now understood quite well. But nearly everything in our lives involves energy flow, from photosynthesis to digestion to tropical cyclones, and we don’t yet have the physics to describe it well. Scientists think a better understanding could lead to huge improvements in energy capture, batteries and energy storage, electronics and more.

As we seek to make electronics faster and smaller, Mott systems also offer a possible alternative to the silicon transistor. Since they can be flipped between conducting and insulating with small changes in voltage, they may be able to encode 1s and 0s at smaller scales and higher accuracy than silicon transistors.

‘Initially, we were studying the structures for completely different reasons, namely to investigate the effects of inhomogeneities on superconductivity,” Hilgenkamp said. “After discussing with Valerii Vinokur at Argonne, we looked more specifically into our data and were quite amazed to see that it revealed so nicely the details of the transition between the state of locked and moving vortices. There are many ideas for follow up studies, and we look forward to our continued collaboration.”

The results were printed in the study “Critical behavior at a dynamic vortex insulator-to-metal transition,” released today in Science. Other co-authors are associated with the Siberian Branch of Russian Academy of Science, the Rome International Center for Materials Science Superstripes, Novosibirsk State University, the Moscow Institute of Physics and Technology and Queen Mary University of London.

This research was supported by the Netherlands Organization for Scientific Research (NWO) and Foundation for Fundamental Research on Matter (FOM); the U.S. Department of Energy, Office of Science, Materials Sciences and Engineering Division; the Ministry of Education and Science of the Russian Federation; the Alexander von Humboldt Foundation; and the Marie Curie Intra-European Fellowships for Career Development.

The University of Twente is a modern, entrepreneurial university, leading in the area of new technologies and a catalyst for change, innovation and progress in society. Our strength lies in our capacity to combine. We are working on future technologies including: ICT, biotechnology and nanotechnology for which behavioural and social science research are essential. After all, the most interesting and relevant innovations take place at the cutting edge of these technologies and their impact on humanity and societies.