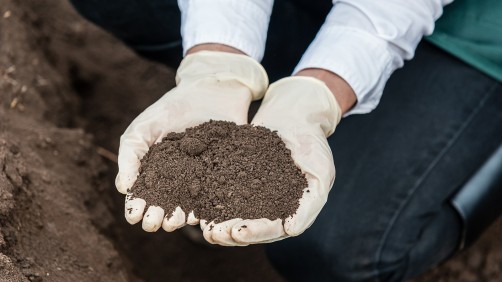 How can scientists use the revolutionary advances in sensors, sensor networks and related technologies to advance the understanding of soil? Researchers from Argonne and The University of Chicago began to answer this question at a recent workshop.

Newswise — The world’s leading soil scientists met at Argonne recently to discuss the importance of what’s under our feet.

Microbes are single-cell organisms that are too small to be seen with the naked eye. Yet while relatively inconspicuous, they are the dominant life form on our planet.

“Microbes shape how everything in this world survives,” said Jack Gilbert, faculty director at the University of Chicago’s Microbiome Center and group leader for microbial ecology at the U.S. Department of Energy’s (DOE) Argonne National Laboratory. “If you don’t understand them, you won’t understand anything.”

With funding support from the National Science Foundation (NSF) and hosted by the University of Chicago, 22 leading researchers in the fields of soil science, microbiology, computational biology, sensors and nanotechnology recently gathered at the two-day Microbiome Soil Sensors Workshop in August to create a roadmap for measuring microbial activity in the soil.

Why focus on soil? Soil supports ecosystems that are critical to life, and provides a habitat for billions of organisms.

“All our food and water is dependent on soil,” explained Tijana Rajh, an Argonne Distinguished Fellow and deputy director of the Center for Nanoscale Materials, a DOE Office of Science User Facility, at Argonne. “With alterations in the climate, how will that affect food and water? What is coming out of the soil? How is soil changing? These questions have global implications.”

The workshop was part of a broader initiative that began with a meeting last year, also funded by the NSF and hosted by the University of Chicago, to identify overarching challenges in soil and plant science and subterranean sensing. In particular, scientists wanted to know how the revolutionary advances in sensors, sensor networks and related technologies could be used to advance the understanding of soil.

According to Supratik Guha, director of the Center for Nanoscale Materials and professor of molecular engineering at the University of Chicago, the key to developing better soil models is to generate better data. “There’s been an explosion in sensor networks, and science can benefit from that,” he said.

At the workshop, broad consensus emerged concerning the need for context in taking measurements. In scientific terms, context refers to the need to produce more accurate measurements of soil microbial processes in order to improve understanding of how microbial interactions are shaped by the physical, chemical and biological properties of the soil.

The workshop participants also discussed the need to perform investigations of microbial communities at different scales, which include spatial, temporal and molecular. Creating data at multiple scales will require new models that mathematically integrate different data at nested levels, linking everything from a cell’s biochemistry to its influence on global processes.

Finally, the group addressed the next stage of needed technological improvements. With technological advances having already enabled a new class of sensors specifically designed for subterranean settings, the need now is for an integrated, non-invasive system that seamlessly manages data from sample prep to detection to modeling and data analytics – and that adjusts in real time.

Gilbert said the field is still in a nascent stage, and the workshop will help point the way forward. “We will develop a report with broad strokes of understanding about what needs to be measured and the technologies necessary to do so,” he said. “Then will come a strategy to deploy sensors and measure soils around the world.”

Among other new initiatives funded by the NSF, including 20 related national research projects, a team from Argonne’s Nanoscience and Technology Division, in cooperation with ecologists, will deploy a sensor network at Fermilab next year for a field test.

That Argonne and the University of Chicago are so deeply involved in this effort makes perfect sense to Rajh.

“We bring a multi-disciplinary approach, have experts in the field, and have a history of teaming up on the multi-dimensional analysis of issues and the synthesis of solutions,” she said. “The challenges that are coming up in the future are food and water. And we need to prepare solutions for that.”

Editor’s note: This story is part of a series that showcases the collaborative research efforts of UChicago and Argonne.

About Argonne’s Center for Nanoscale MaterialsThe Center for Nanoscale Materials is one of the five DOE Nanoscale Science Research Centers, premier national user facilities for interdisciplinary research at the nanoscale supported by the DOE Office of Science. Together the NSRCs comprise a suite of complementary facilities that provide researchers with state-of-the-art capabilities to fabricate, process, characterize and model nanoscale materials, and constitute the largest infrastructure investment of the National Nanotechnology Initiative. The NSRCs are located at DOE’s Argonne, Brookhaven, Lawrence Berkeley, Oak Ridge, Sandia and Los Alamos National Laboratories. For more information about the DOE NSRCs, please visit https://​sci​ence​.ener​gy​.gov/​b​e​s​/​s​u​f​/​u​s​e​r​-​f​a​c​i​l​i​t​i​e​s​/​n​a​n​o​s​c​a​l​e​-​s​c​i​e​n​c​e​-​r​e​s​e​a​r​c​h​-​c​e​n​ters/.