The Biermann Battery Effect: Spontaneous Generation of Magnetic Fields and Their Severing 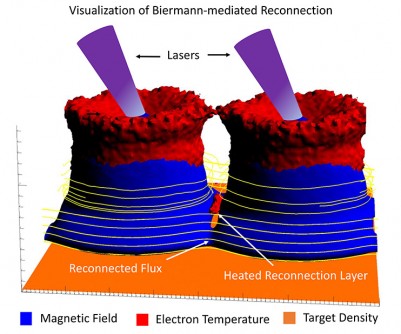 Lasers drive the expansion of two plasma bubbles from a solid metal target. Magnetic fields are generated about each plume by the Biermann battery effect. These fields expand with the plumes and collide (center of the figure), resulting in a heated reconnection layer. This local heating at the collision site modifies the local temperature profile, so rather than continuing to generate flux, the Biermann battery effect now destroys the magnetic energy flowing into the reconnection layer and reconnects the field downstream.

When hot, ionized gases known as plasmas in the interstellar media collide, the electron density and temperature profiles can become misaligned. A strong electromotive “loop” force then drives electric currents that create magnetic fields. This process is known as the Biermann battery effect. In the cosmos, spontaneously generated “Biermann” magnetic fields, subsequently amplified by protogalactic turbulence, are thought to be the source of the magnetic fields that now permeate our universe. In the laboratory, blasting metal targets with high-powered lasers creates ultra-strong magnetic fields—thousands of times stronger than household bar magnets—produced by the Biermann effect. Now, scientists have found a new role for this effect in destroying magnetic energy during a process known as magnetic reconnection.

One approach for producing controlled fusion, and the virtually limitless supply of energy that comes with it, is to use high-powered lasers to create exploding plasmas that force a small target of hydrogen ice to implode, and thereby fuse. Researchers performed numerical simulations of such experiments. These simulations correctly reproduce the experimental conditions. The work captures the initial spontaneous formation of the magnetic field via the Biermann effect, along with the formation and evolution of the plasma plumes and their reconnection and annihilation. The Biermann effect has, for the first time, been shown to enhance the reconnection.

Magnetic reconnection occurs when oppositely directed magnetic fields are forced together in plasmas, which are excellent electrical conductors. A narrow current sheet forms, which “tears” apart the magnetic field resulting in a violent and explosive conversion of magnetic energy into kinetic energy. This ubiquitous plasma phenomenon causes solar flares, magnetic turbulence in the magnetosphere, and the sawtooth instability in magnetically confined fusion experiments in doughnut-shaped tokamak reactors.

To model the high-energy-density experiments, the researchers used the physically veracious “particle-in-cell” dynamical model. The model tracks tens of billions of ions and electrons in time as they interact with one another and with the electric and magnetic fields that their motion creates. Simulating individual particles provides scientists with unparalleled insight into the mosaic of interactions; however, such detail demands supercomputing capabilities—the largest simulations required roughly 1 million CPU hours.

The experiments and numerical simulations provide a new platform for replicating in the laboratory the magnetic reconnection observed in astrophysical plasmas. Researchers discovered a new mechanism, named the Biermann battery-mediated reconnection, using these processes. Findings indicate that 3-D variations in the electron density and temperature inside the current sheet generate extra currents, and this enhances the rate of the reconnection and the conversion of magnetic energy into kinetic energy. The results could help to better understand reconnection in space plasmas, as in the Earth’s magnetosheath, and could provide insight into the plasma and magnetic field dynamics in high-energy-density plasmas.

The Department of Energy, Office of Science, Fusion Energy Sciences supported this research. Simulations were conducted on the Titan supercomputer at the Oak Ridge Leadership Computing Facility at the Oak Ridge National Laboratory, supported by the DOE Office of Science. J.M. was supported by the Department of Defense through the National Defense Science and Engineering Graduate Fellowship.