The historical partnership that revolutionized battery research at Argonne 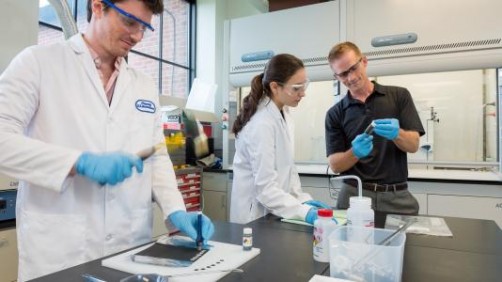 Newswise — Researchers around the world are on the hunt to find cheaper, better lithium-ion battery materials to power large scale machines, such as electric vehicles. One of their goals is to find alternative lithium-metal-oxide electrodes to those containing cobalt, an element common within phone and laptop batteries but too expensive and short on capacity to propel electric vehicles over long distances.

For decades, researchers at the U.S. Department of Energy’s (DOE) Argonne National Laboratory have taken part in the pursuit to uncover battery materials that perform as well as, if not better than, the ones we use today. Among the materials they’re investigating are manganese-rich compounds, because manganese is abundant and inexpensive; lithium-manganese oxides are also thermally safer to use, but not as energy dense as their cobalt counterparts.

“The ultimate goal is to make a structurally-stable, manganese-rich electrode for a lithium-ion battery that can give you long-time energy.” — Argonne scientist Jason Croy

The laboratory’s study of manganese-rich materials is shaped by the work that Argonne Emeritus Fellow Michael Thackeray has been doing since the early 1980s. While a postdoc at Oxford University in 1981-1982, Thackeray worked alongside battery scientist John Goodenough, one of the Nobel-prize winning architects of the modern lithium-cobalt-oxide battery.

Working together, Goodenough and Thackeray discovered a lithium-manganese-oxide electrode with a “spinel-type” structure that was cheaper and safer than the popular layered structure of lithium-cobalt-oxide Goodenough helped identify, though it suffered from inferior performance. A material “in spinel” is arranged in a cubic, close-packed 3D structure. Spinel electrodes have 3D channels to accommodate lithium quickly, and can therefore deliver high power, making them unique over the 2D layered and 1D tunnel electrode structures that other lithium-ion batteries adopt.

Goodenough and Thackeray’s spinel research, which Thackeray expanded when he joined Argonne in 1993, has transformed Argonne’s battery program to this day. In a recently published paper in Advanced Energy Materials, Thackeray discusses how their research on the structures and compositions of manganese-based lithium-metal oxides has evolved, and informs ongoing work today.

Building on their early work, Argonne researchers have developed a number of manganese-rich materials, including lithium-rich nickel-manganese-cobalt (NMC) cathodes, which Thackeray co-invented. Lithium-rich NMC is a breakthrough cathode technology that has provided noticeable improvements in performance and reliability over standard NMC compositions in lithium-ion technology. Argonne’s NMC technology has been licensed to manufacturers worldwide including General Motors, which adopted the cathode material in its Chevy Volt and Bolt models.

Thackeray and Goodenough’s work continues to inspire ongoing research at Argonne, where researchers are integrating spinel-type materials into cathodes at the nanoscale level, and are fine tuning spinel properties to engineer desirable properties within the cathode. For example, different spinel-type materials have been identified that can help stabilize NMC cathodes and aid the design of cathode and electrolyte materials for all-solid-state lithium-ion cells and batteries.

Argonne scientist Jason Croy and colleagues are intensifying work on a version of the NMC technology that boosts both the lithium and manganese content over currently used versions, ideally improving a battery’s energy density and safety while lowering costs. The improved technology is available for licensing.

“The ultimate goal of this research is to make a structurally-stable, manganese-rich electrode for a lithium-ion battery that can give you long-time energy,” Croy said. “The hope is that, by combining spinels with new materials, we’ll be able to develop new economically-viable options to cobalt- and nickel-rich materials.”

Argonne’s research integrating spinel-type materials into cathodes is supported by the Vehicle Technologies Office in DOE’s Office of Energy Efficiency and Renewable Energy.