The Power of One: Single Crystals Provide Clarity 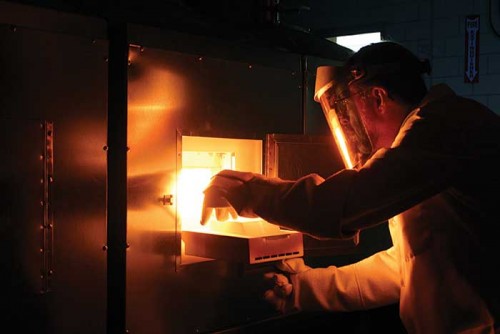 Newswise — When it comes to creating new materials, single crystals play an important role in presenting a clearer picture of a material’s intrinsic properties. A typical material will be comprised of lots of smaller crystals and the grain boundaries between these crystals can act as impediments, affecting properties such as electrical or thermal resistance.

“Those boundaries can have profound effects, both good and bad,” said Ames Laboratory materials scientist and deputy director Tom Lograsso. “Generally, a material that has smaller and smaller crystals actually has improved mechanical properties.”

An exception to this rule is that at high temperature, relative to the melting point, small crystals can have a tendency to slide past one another, a property called creep. It’s for this reason that turbine blades in some jet engines or generators are actually formed from single crystals of nickel-based alloy. A few other everyday applications using single crystals are semi-conductors, detectors, such as infrared or radiation sensors, and lasers.

“The active component in a laser is a single crystal,” said Lograsso, who is also an Iowa State University adjunct professor of materials science and engineering, “because the crystal grain boundaries would scatter the light.”

From a research viewpoint, especially when creating a new material, scientists want to remove as many variables as possible to best understand a material’s properties. A primary way to do this is to begin with raw materials that are as pure as possible and to produce the material as a single crystal. “You don’t want defects in the crystal structure and you don’t want impurities, which can be a source of extra nucleation,” Lograsso said. “New materials can have new physics, and we can determine what those are if we make measurements on a clean, pristine sample (i.e. single crystal). And if we do that consistently, we can make comparisons to other materials and see how it fits into our understanding of particular behaviors.”

Ames Laboratory scientists employ a number of techniques to grow single crystals, with each suited to producing crystals from different types of materials. However, the basic premise is the same—oversaturate a solution, then precipitate out the crystal.

“As kids, we’re familiar with adding rock salt or sugar to hot water until you supersaturate the liquid,” Lograsso said. “Then, as the water cools and eventually starts to evaporate, crystals of salt or sugar start to form and then grow.

“You can do the same with about any two materials, using one as the solvent and then using heat or high temperatures to supersaturate the solvent,” he continued. “The tricky part is to get a single crystal to first form and then grow.”

One of the better known methods, the Bridgman technique—named for Harvard physicist Percy Williams Bridgman—uses a crucible with a pointed, conical end. This fine point promotes the growth of a single crystal as the crucible exits the heated portion of the furnace. Heat is provided through a heating element similar to the one in a home oven (resistance) or via a magnetic field (induction).

“Crucibles age over time and become better at producing single crystals,” Lograsso said. “Unfortunately, you sometimes break the crucible removing the crystal. Because they grow inside a crucible, crystals formed in this manner may also develop stresses such as cracks or voids.”

Ames Laboratory also has a special Bridgman furnace that allows crystal growth at higher pressures—up to 15 Bar. This allows growth of crystals from alloys that contain volatile components. The high pressure prevents these components, which have a lower boiling point than alloy’s other components, from flashing off as a vapor before the crystal can form.

This method also heats the material in a crucible, but here, the crystal is actually drawn from the molten solution. Lograsso likens it to dipping a candle “except you only dip once.”

A seed crystal of the material is attached to the end of a rod. The rod is lowered until the seed crystal just touches the surface of the molten material in the crucible. The rod is then rotated and withdrawn very slowly, pulling the newly formed crystal from the liquid.

“Because the crystal is freestanding, it doesn’t have the stresses that you sometimes get with the Bridgman method,” Lograsso said. “Depending on the material, crystals can also be 60 cm in diameter, or larger, and several feet in length. This is a very common method for producing large silicon crystals which are sliced into wafers for use in semiconductors.”

“It’s container-free—you don’t need or use a crucible to grow the crystal so it eliminates any potential reaction between the sample and the container,” Liu said. “Because the melt zone is very focused and narrow, we’re able to achieve a very large temperature gradient between the solid and liquid phases, which results in high-quality crystal growth.”

A typical optical float zone furnace consists of four high-powered halogen bulbs arranged in a ring around the sample. Semi-spherical reflectors around each bulb focus the intense light energy in a narrow band around the sample at temperatures up to 2,100 degrees Celsius.

The sample ingot itself starts in two pieces. The shorter “seed” side is on the bottom and held in a base. The longer “feed” side is suspended closely above the seed side. As the two sides begin to melt, a small pool of liquid collects on each surface and as they are brought closer together, the surface tension of the pools connect to form an hour-glass-shaped band of molten material between the seed and feed sides.

By twisting the two sides in opposite directions, the liquid sample is effectively “stirred” to ensure a uniform distribution of material in the melt zone. The sample is then slowly lowered through the focused circle of light, allowing the narrow melt zone to progressively melt, mix and solidify its way up the feed side of the sample.

“For materials with low vapor pressure, we can grow crystals at a rate of one millimeter per hour,” Liu said. “We can use the technique on a variety of materials, but we always start with the phase diagram (kind of a growth map) to determine if it’s possible. We can’t grow crystals with high vapor pressure or that may be toxic using this method.”

While the other three methods work well for materials where the crystalline outcome is known, researchers also look to discover and grow single crystals of new binary, ternary, quaternary or higher compounds. In many cases, the materials in these compounds don’t melt congruently meaning they do not melt at a single temperature.

“Solution growth is extremely versatile, and you can often optimize and cycle through it rapidly,” said Ames Laboratory physicist and Iowa State University Distinguished Professor Paul Canfield. “In general, it does not give you as large a crystal, but for basic physical measurements, something between a millimeter and a centimeter is more than adequate.”

In practice, the compounds for the target crystal are combined with a material that will serve as the solution in which the crystal compound will dissolve. For example, to grow a cerium-antimony crystal from a tin solution, or flux, you may start with four percent each of Ce and Sb with the other 92 percent Sn.The materials go into a “growth” crucible that’s paired with a “catch” crucible. These are then sealed in a silica tube. The tube assembly is placed in a furnace and heated so all the elements melt. The temperature is then lowered closer to the melting point of the solution element, allowing the target crystal to form. In the Ce-Sb in Sn flux example, the initial temperature is roughly 1,000 degrees Celsius, then lowered to 600 degrees.

To then separate the liquid tin from the Ce-Sb crystal, the tube assembly is removed from the furnace and immediately placed in a centrifuge, which spins the remaining liquid tin off into the catch crucible, leaving the crystal behind. The centrifuge delivers up to 100 times the force of simple gravitational decanting, resulting in “cleaner” crystals.

“When you develop new materials, you need to have some familiarity with the ingredients and the techniques at hand,” said Canfield. “With solution growth, we can go from looking at superconductors and ferromagnets, to spin glasses, to quasicrystals—go from one material to another to another—just by changing elements or growth conditions. Over the course of 20 years here, we are closing in on 10 thousand different growths.”