The Rise of Giant Viruses

Research reveals that giant viruses acquire genes piecemeal from others, with implications for bioenergy production and environmental cleanup. 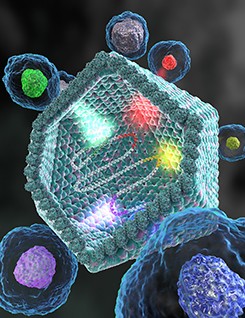 Newswise — The number of microbes in, on, and around the planet is said to outnumber the stars in the sky. The number of viruses found worldwide is at least an order of magnitude greater. As their name suggests, giant viruses are larger than many bacterial and eukaryotic cells. They were first discovered in 2003, and the true breadth of their diversity remains unknown. In a study led by researchers at the U.S. Department of Energy Joint Genome Institute (DOE JGI), a DOE Office of Science user facility, a new group of giant viruses has been uncovered after sifting through complex genetic datasets. Dubbed Klosneuviruses, the giant virus contains a more complete set of translation machinery genes than any other virus known to date.

Contrary to popular belief, most viruses don’t affect humans. They do, however, impact microbes, which regulate certain cycles on Earth. Algae and other organisms (called protists) sequester large fractions of carbon in the atmosphere. Protists are vital in the global carbon cycle. Viruses can significantly affect the protist population, reducing their ability to regulate global cycles. Protists are thought to be the host of Klosneuviruses. Knowing how giant viruses impact microbial survival and community interactions is relevant to U.S. Department of Energy missions in bioenergy and environment.

While sifting through metagenomic sequence datasets for a U.S. Department of Energy Joint Genome Institute (JGI) Community Science Program project, researchers identified genome sequences typically found in giant viruses. A group of giant viruses called Mimiviruses was first discovered in 2003, and a handful of such groups have been reported since. The researchers assembled a 1.57-million base (megabase) genome of a suspected giant virus they called Klosneuvirus. Further searching through the metagenomic datasets uncovered three more related giant virus genomes. Three of the four Klosneuviruses were found with representatives of the protist phylum Cercozoa. This is unusual because until now, all giant viruses had been recovered with Acanthamoeba (amoebas found in soils and fresh waters), which was not seen with the Klosneuviruses. The team also found that the Klosneuviruses encoded components for a far more expansive translation system than had been seen with other giant viruses. Aside from increasing the known gene pool of giant viruses by nearly 2,500 additional gene families, comparing the genes to previously discovered giant viruses revealed that the Klosneuviruses are a subfamily of Mimiviruses. Starting then from their last shared ancestor with the Mimiviruses, the researchers suggest that over time, the Klosneuviruses picked up genes from different hosts. Overall, the team’s findings lend credence to the theory that giant viruses evolved from much smaller viruses, rather than aligning with theories that they may instead be descended from a cellular ancestor. The consequences of Klosneuvirus infection of protist hosts remains to be explored.