The Traits of Microbes Matter in Microbial Carbon Cycling and Storage

Research identifies microbiome traits that might be harnessed to improve global carbon models and or help increase carbon storage in soil. 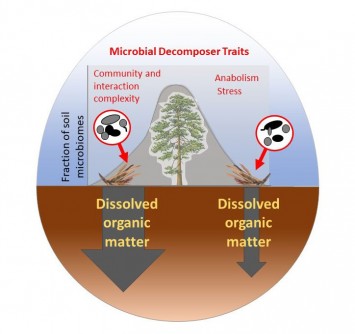 Newswise — Soils are rich in many types of microbes. Each species of microbe has a unique set of genes in its genome, but scientists do not know if this diversity affects how plant matter breaks down. Plant organic matter that is not broken down can be stored in soils. This removes carbon from the atmosphere for long periods of time. Researchers wanted to know if different microbial communities (microbiomes) would be equally good at breaking down leaf litter. They sampled more than 200 soils and measured the products that the microbes in these soils produced from leaf litter. The researchers also measured the activity of microbial genes. These data helped to identify the microbial traits that might lead to carbon storage or loss. The data suggest that the makeup of a soil microbiome is critical to the fate of carbon in that soil.

This study indicates that there is a strong connection between the makeup of a microbiome and the rate at which leaf litter can be decomposed to carbon dioxide or other products. It also identifies microbial traits linked to increased storage of carbon in soil. The research suggests that it might be possible to harness, manipulate, or even adapt microbiomes to increase carbon storage in soil. This could have benefits for soil health, agriculture, sustainable biofuels production, and other applications.

Soil microbes can break down plant organic matter to carbon dioxide or convert it to dissolved organic carbon (DOC) compounds. This leads either to long-term carbon storage, because DOC can bind to soil particles, or to the release of carbon back to the atmosphere as carbon dioxide. The relative contributions of these two processes have been hard to reconcile in global carbon models, in part because scientists do not fully understand the underlying microbial processes. This study conducted a large number of controlled trials on litter degradation with a diverse set of microbial communities. Using a combination of analytical and other biological research techniques (for example, genomics), the work aimed to identify “effect traits,” which are microbial properties that lead to changes in the environment. The researchers used a “common garden” research design to sample 206 different microbiomes under similar environmental conditions. The researchers then identified distinct groups of high- and low-performing communities. Next, they used machine learning tools to identify community members and genetic traits that predict the rate of carbon dioxide production and DOC release.  Greater species richness and genetic diversity were found in samples that produced lower levels of DOC and higher levels of CO2 release. These communities also exhibited greater potential for complex organic matter degradation based on genomic data.  On the contrary, microbial communities that produced higher levels of DOC appeared more attuned to the degradation of simpler carbon substrates.  While these findings are contrary to the commonly held assumption that microbial populations are adapted to achieve maximal environmental efficiencies, they suggest microbiomes can potentially be engineered or manipulated toward desirable outcomes. A better understanding of the controls on microbially mediated carbon flow can also help to improve efforts to model the fate of carbon in the environment.

This work was supported by the Department of Energy Office of Science, Office of Biological and Environmental Research via a Scientific Focus Area Award.