The Ultrafast Interplay Between Molecules and Materials 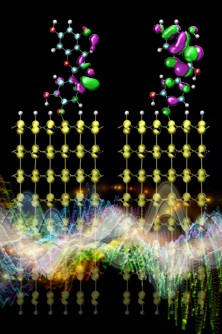 Researchers used sophisticated calculations to see how the electrons (see purple and green shapes) move around certain atoms in cyanidin (top), a red pigment naturally occurring in grapes and cherries, and interact with silicon. The results are critical to understanding how — and how quickly — electrons navigate through complex systems required for fuel production from sunlight and air.

Newswise — In pursuit of a renewable fuel source, a long-run objective is to create a device that synthesizes fuels from sunlight and air. This goal is the focus of the Center for Solar Fuels, an Energy Frontier Research Center. At the Center, a diverse group including chemists and physicists are collaborating to achieve this objective.

Of particular interest to the team is the exact way electrons move around between semiconductors and molecules attached at the surface. Semiconductors are materials that can both conduct electricity and insulate against it. Semiconductors, such as silicon, are essential to separate charges. Without high-yield charge separation, producing electricity or turning sunlight into fuels would not be effective or efficient. Recent research by team members Lesheng Li and Yosuke Kanai shows how calculations can simulate the electron pathways and timescales at semiconductor-molecule interfaces. The specific system studied silicon as the semiconductor surface and cyanidin, a red pigment naturally occurring in many red fruits such as grapes and cherries, as the molecule.

Kanai and his team have leveraged these calculations to better understand solar devices. The inner workings of microscopic systems such as at the molecular scale and nanoscale can prove to be very difficult to figure out precisely. With advanced high-performance computers now available, scientists can use simulations to model microscopic systems of interest and obtain highly specific descriptions.

The simulations allowed them to view and model processes that happen very quickly — as fast as on the femtosecond (one quadrillionth of a second) timescale. These ultrafast dynamics are critical for the success of optical and electronic devices, and first-principles calculations provide a unique vantage point to view how quickly electrons move within semiconductor-molecular interfaces.

With the first-principles computational modeling, the team precisely defined every atom in the lattice. The entire geometry is exactly defined within the model. The control afforded by using these explicit models let the team ask more precise questions and, consequently, yield more informative results about complex systems.

They used the ability to define a precise atomic model to introduce a singular defect by misplacing or omitting an individual atom within the lattice. Defects in semiconductors significantly impact the electronic properties making the exact characterization of critical importance.

For solar cells and other systems, electron dynamics at semiconductor-molecule interface determine the solar-to-electric efficiency and sources of failure in the system. Thus, better understanding these dynamics has clear consequences for improving optical-electronic system performance. The research presented here lays the foundation for future calculations, and the first-principles simulations employed in this study can be extended to other systems by varying the semiconductor surface and/or varying the molecules that are modeled. By describing a more exact picture of how electrons move through systems relevant to solar cells, the team at the Center for Solar Fuels is one step closer to creating a fuel from sunlight and air.

This item, written by Shannon McCullough, is part of Frontiers in Energy Research, a newsletter for the Energy Frontier Research Centers created by early career members of the centers. See http://www.energyfrontier.us/newsletter/