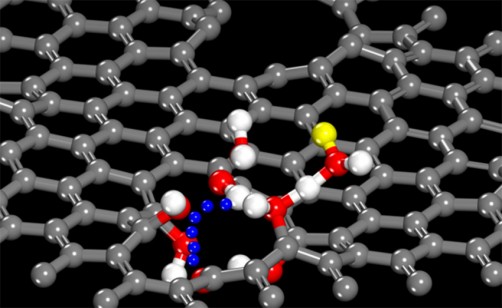 A proton (marked in yellow) is initially attached to a water molecule above the layer of carbon (grey) in graphene. The proton passes along a chain of hydroxyl groups (oxygen red, protons white) terminating a defect in the graphene created by four missing carbon atoms. Through the defect, the proton moves to water on the other side (blue dots approximate the path of the proton).

Synthesis, computation, microscopy, and laser methods allowed researchers to correlate atomic-scale defects in graphene with an efficient “bucket brigade” style mechanism that allows protons to travel through the graphene via molecular chains of hydrogen and oxygen.

Demonstrating a realistic and viable mechanism for selective proton transfer across a defect in an atomically thin membrane, and the prospect for gating it, could enable selective, atomic-scale control for directing proton pathways for next-generation energy applications, such as improved fuel cells.

Graphene is a single-atom thick, two-dimensional array of carbon atoms that is impenetrable even to protons unless the graphene membrane has macroscopic holes. However, recently a team of researchers in the Fluid Interface Reactions, Structures and Transport Center Energy Frontier Research Center combined the latest synthesis, computations, microscopy, and laser methods to show that certain types of atomic-scale defects in a graphene membrane enable the selective transfer of protons. The protons move from a water molecule on one side of the membrane to hydroxyl (-OH) groups terminating the broken carbon bonds surrounding a defect. The defect is caused by a few missing carbon atoms in the graphene sheet, which forms a channel, allowing the proton to move to a water molecule on the other side of the membrane. Computations such as quantum chemical and reactive force field calculations indicated that the protons follow this “bucket-brigade” transfer mechanism such that the oxygen atoms of the water and the -OH groups do not have to physically move to enable diffusional proton transfer. Experimental observation of the unimpeded passage of protons through the graphene was achieved by using a nonlinear laser optical method to monitor the change in surface charge of a nearby substrate due to the migration of protons through the graphene membrane. High-resolution scanning transmission electron microscopy was used to identify rare, but fairly uniformly distributed, atomic-scale defects involving missing carbon atoms. The results demonstrate that perfection is not needed when it comes to the synthesis of proton-selective graphene membranes, potentially enabling the manufacture of less expensive fuel cells.