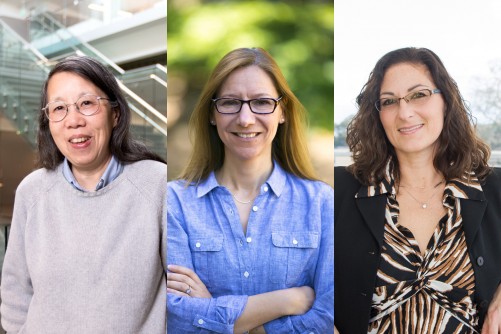 Newswise — At a March 7 ceremony, three employees of the Department of Energy’s SLAC National Accelerator Laboratory were awarded the lab’s highest honor ­– the SLAC Director’s Award.

“Our core values are the ‘how’ behind what we do collectively at SLAC to make great science possible,” says Lab Director Chi-Chang Kao. “When we live our values in the work we do, we demonstrate for each other the daily actions and behaviors that make us better individually and that create a unique culture at SLAC.”

Sila Kiliccote joined the lab in 2015 to take on an exciting challenge with a modest budget: build a smart-grid program that would use scientific tools to solve fundamental energy problems and take them to the level of societal impact.

She quickly decided she needed a great group of bright and hard-working collaborators, and tapped into faculty and students at Stanford University and at the Carnegie Mellon University (CMU) Silicon Valley campus.

"Every week I went down to the Stanford campus and invited faculty and students to a social gathering where we talked about smart-grid challenges and started putting concepts and ideas together," Kiliccote says.

She also pitched two practicum projects to CMU and brought eight students to work on it at SLAC. "These were highly qualified, master's level software engineers who worked with mentors on exploring concepts and then creating multimedia presentations to disseminate the results of their efforts," she says.

The result was the start-up of a group called Grid Integration, Systems and Mobility, or GISMo, that performs energy research in an innovative smart-grid lab at SLAC. As leader of this group, Kiliccote says her long-range vision is to "facilitate 100 percent clean energy adoption through advances in power systems, buildings and mobility."

Emre Kara, associate staff scientist who works with Kiliccote on project proposals, says it is obvious that she cares about the team and about creating an environment where they excel. "When you work with her on a proposal, she tries to create a portfolio of projects where every member of the team is excited to do their bit,” he says. “It sounds easy, but requires you to know the team and the field very well to connect the pieces. She makes it look effortless, which is inspiring."

Kiliccote is also working with the [email protected]​SLAC Employee Resource Group on a committee that is helping build a mentoring program at the lab. She believes that mentors and mentees learn a lot from the relationship. "Mentoring also makes the workplace a more inclusive and enjoyable environment," she says.

Hartney emphasized that Kiliccote's creative, collaborative approach and dedication to excellence also helped her gain traction in building the program's budget. "She was tremendously successful in bringing in funding, winning multiple projects from the SunShot and Building Technologies programs at DOE as well as from the California Energy Commission, which will give us a diversified funding base for these efforts,” he says.

After joining SLAC in August 2015, Jodi Verleger led the development of a new performance tool that seeks to support better habits when it comes to having performance conversations, getting better feedback and helping employees take charge of their own development.

A core team of six helped drive this effort. But Verleger knew that in order to develop something that would be welcomed and broadly used, they would need to seek the input of people from across the lab. The project also relied on a large group of people who tested and provided feedback on the tool before the launch.

This collaborative approach was skillfully managed by Verleger, whose openness to ideas and ability to work with people across functions was a great asset to the project.

“Jodi will ask the right questions and she knows how to ask them in a way that represents all groups,” says Human Resource Information System Lead Analyst Ramona Miahnarhi. “She will try and think a problem through but she won't try to come up with the solution; she will leave that up to the experts.”

The discussions weren’t always easy. There were times of disagreement as opposing viewpoints came together. It’s this kind of robust debate that motivated Verleger and the team to think creatively and look at the problems from multiple angles.

“We would just keep bringing different options back to the group, trying to find the best solution,” Verleger says. “It really was a team effort.”

Lydia Young, director of METSD, was impressed by Verleger’s thorough and practical approach to her work. “She successfully applied engineering best practices far better than many engineers typically do,” Young says. “She constantly sought feedback during the development of the online tool’s pages, and was extraordinarily attentive to details such as sequencing of steps, linkages, ease of use and general design.”

Verleger’s dedication to excellence came to fruition when the performance tool launched less than a year after the project commenced. “I’ve been involved in software development for 17 years and I’ve never seen a product owner dedicate so much time to training users,” says Grigoriy Ayzenshtadt from IT Development Operations. “I strongly believe that this is why the launch of the new tool went so smoothly.”

The team members agreed that Verleger was extremely organized and attentive to the details of her work. But what made the project such a great experience was her positive outlook and enthusiasm for what she does. Organization Effectiveness & Employee Development Manager Christi Olson was her supervisor during the project and had much praise for her ability to build relationships across the lab so soon after joining SLAC: “I was inspired by her passion, energy and genuine joy in working with her colleagues and SLAC leaders throughout the project.”

For Lydia Young, who arrived at SLAC in August 2014, excellence and leadership are two of the key values that elevate the management of complex projects to true project leadership – an important difference that secures SLAC’s place at the forefront of science.

“Our scientists and engineers develop highly sophisticated discovery machines that are very challenging to design and build,” she says. “Excellence and leadership means that we always strive to execute efficiently, planning ahead of time so that we can build and install these instruments not only with extremely high quality, but also within budget and on time.”

For the future LCLS-II X-ray laser, for example, Young is developing a manufacturing plan that makes sure the project proceeds as smoothly as possible from its design stage to fabrication and installation – a huge effort that requires coordination of hundreds of people and several partner labs and institutions. She is also working on establishing the infrastructure to manufacture and assemble LCLS-II parts on site in an ultraclean environment, which is an absolute requirement for the next-generation light source.

“Lydia has a natural way of bringing the best out of everyone involved in this project,” says Kathleen Ratcliffe, department head for technical planning in Young’s division and a SLAC veteran of almost 30 years. “She sees the big picture before others do and prepares for all the challenges that are coming our way.”

Foresight in dealing with large projects and the goal of managing them more efficiently also drive Young’s work on implementing a new business system, called Teamcenter, that keeps a history of all engineering- and manufacturing-related documents in one place, where they are easily accessible at any time, thereby maximizing control over complex projects.

“Lydia put in place plans and processes that are absolutely crucial for executing major projects,” says Lia Merminga, associate lab director for the Accelerator Directorate. “Her many contributions are a great example for the extraordinary leadership we need to accomplish our scientific mission.”

Although Young was trained as a scientist, her true passion is to build things, which led her to pursue a career in engineering. As a co-chair of the new Engineering Engagement Initiative, she is helping create a strategic vision for engineering that best supports the lab’s scientific priorities and the career development of SLAC engineers.

“Lydia does an excellent job in keeping the team on task,” says Lisa Bonetti, the lab’s interim chief engineer. “She’s instrumental in organizing the initiative’s subcommittees, which over the past months have begun to address important issues, including the creation of career paths and more recognition for our engineers.”