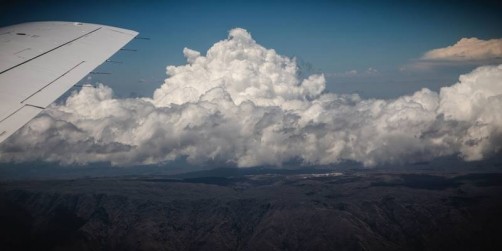 Massive clouds forming at the ridge of the Sierras de Córdoba mountain range in Argentina.

Precipitation extremes are important for agriculture, infrastructure, and water storage. Unfortunately, climate models do not always simulate precipitation extremes that fit with real-world observations. Climate models use a method called parameterization to replace fine-scale or complex processes with a simplified process. Superparameterized (SP) climate models use an advanced form of this method. Climate models break the globe into a grid of columns. SP models contain within each grid column a high-resolution model that can simulate individual clouds. Scientists have previously shown that SP models are better able to simulate clouds than other models. However, scientists must still determine how to represent the small-scale processes—called microphysics—that govern cloud droplets and ice crystals. This study examined how choices of microphysics processes affect how SP models predict extreme precipitation.

The study examined how the representation of cloud microphysics in an SP model affects the global precipitation extremes that the model simulates. It found that the representation alters large-scale atmospheric motions that then feed back onto rain rates on long time scales (approximately 1 year). This confirms the researchers’ previous study that focused on the contiguous United States (CONUS). The new study also showed that the choice of microphysics can directly affect modeled local rainfall extremes on short time scales (approximately 5 days) in the tropics. Depending on the specific microphysics, the representations the researchers studied can produce a range of extreme precipitation values. Despite the differences, the simulated precipitation rates lie in the range of those from two sets of real-world observations. This shows that the microphysics approach is promising for SP climate models.

As climate models with resolution high enough to represent many of the complex details of clouds become more commonplace, researchers need to know whether these models can accurately simulate precipitation extremes. Microphysics processes, which include the formation and breakup of liquid droplets and ice crystals, cannot be directly simulated because of their small spatial scales. Thus, models must simulate their net effect on clouds indirectly. In this research, scientists investigated multiple ways of doing this within the SP version of the Community Atmosphere Model (CAM) and examined the resultant effect on rainfall extremes. While feedbacks onto large-scale weather patterns are important globally as they were in CONUS, significant local effects manifest in the tropics. For instance, the more comprehensive (2-moment) microphysics scheme produces clouds associated with stronger vertical motion than the less detailed (1-moment) scheme. This stronger vertical motion contributes to greater precipitation extremes. Next, the researchers compared SP-CAM's output to two commonly used datasets from the Global Precipitation Climatological Project and the Tropical Rainfall Measuring Mission. The researchers found that, despite the statistically significant differences they documented between the 2-moment and 1-moment microphysics schemes, both schemes lead to precipitation extremes that fall in between those from the two sets of observations.