To Find New Biofuel Enzymes, It Can Take a Microbial Village 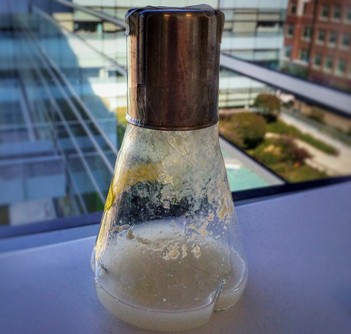 This 50-milliliter flask contains a symbiotic mix of bacteria derived from compost that was maintained for three years. 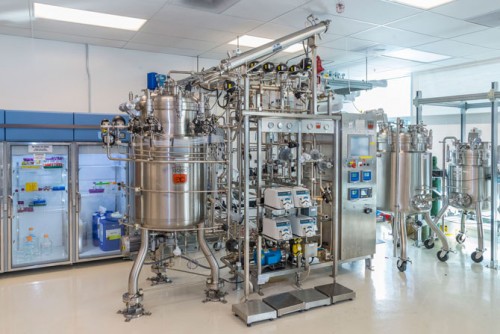 A bioreactor at Berkeley Lab’s Advanced Biofuels and Bioproducts Process Demonstration Unit (ABPDU) was used to scale the growth of the mixture of bacteria from 50 milliliters to 300 liters. 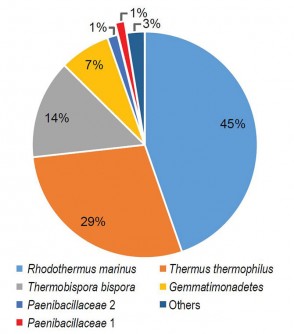 This chart shows the bacterial composition of the community in the bioreactor after two weeks of culturing.

Newswise — A new study led by researchers at the Department of Energy’s Joint BioEnergy Institute (JBEI), based at Lawrence Berkeley National Laboratory (Berkeley Lab), demonstrates the importance of microbial communities as a source of stable enzymes that could be used to convert plants to biofuels.

The study, recently published in the journal Nature Microbiology, reports on the discovery of new types of cellulases, enzymes that help break down plants into ingredients that can be used to make biofuels and bioproducts. The cellulases were cultured from a microbiome. Using a microbial community veers from the approach typically taken of using isolated organisms to obtain enzymes.

The scientists first studied the microbial menagerie present in a few cups of municipal compost. Metagenomic analysis at the DOE Joint Genome Institute (JGI) of the microbiome helped reveal that 70 percent of the enzymatic activity originated from cellulases produced by a cluster of uncultivated bacteria in the compost. They found that the enzymes easily broke down the cellulose in plant biomass into glucose at temperatures up to 80 degrees Celsius.

“Here we’re cultivating an entire community of microbes to access enzymes that we couldn’t get from isolates,” said study principal investigator Steve Singer, senior scientist in Berkeley Lab’s Biological Systems and Engineering Division and director of Microbial and Enzyme Discovery at JBEI. “Some microbes are difficult to culture in a lab. We are cultivating microbes living in communities, as they occur in the wild, which allows us to see things we don’t see when they are isolated. This opens up the opportunity to discover new types of enzymes that are only produced by microbes in communities.”

The bacterial population, Candidatus Reconcilibacillus cellulovorans, yielded cellulases that were arranged in remarkably robust carbohydrate-protein complexes, a structure never before observed in isolates. The stability of the new cellulase complexes makes them attractive for applications in biofuels production, the study authors said.

This stability is a key advantage over other cellulases that degrade more rapidly at high temperature, the researchers said.

To determine whether the enzyme production can be scalable for industrial applications, JBEI scientists collaborated with researchers from the Advanced Biofuels and Bioproducts Process Demonstration Unit (ABPDU) at Berkeley Lab, a scale-up facility established by DOE to help accelerate the commercialization of biofuels research discoveries.

Researchers at JBEI, a DOE Bioenergy Research Center, were able to produce 50-milliliter samples, but in about six weeks, the scientists at ABPDU scaled the cultures to a volume 6,000 times larger – 300 liters – in industrial bioreactors.

The study's lead author is Sebastian Kolinko, who worked on the study as a JBEI postdoctoral researcher. 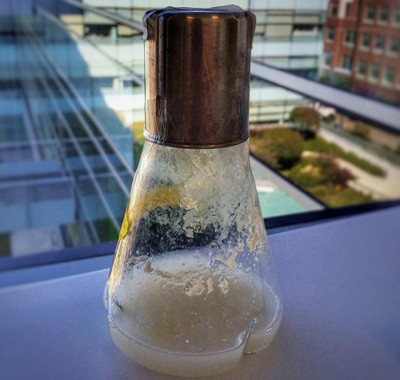 Caption: This 50-milliliter flask contains a symbiotic mix of bacteria derived from compost that was maintained for three years. 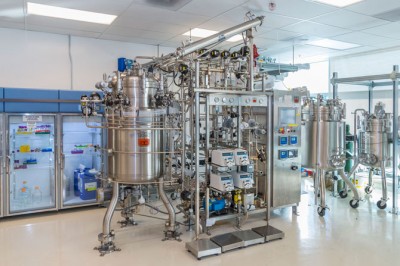 Caption: A bioreactor at Berkeley Lab’s Advanced Biofuels and Bioproducts Process Demonstration Unit (ABPDU) was used to scale the growth of the mixture of bacteria from 50 milliliters to 300 liters. 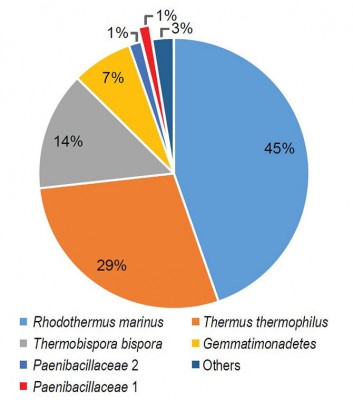 Caption: This chart shows the bacterial composition of the community in the bioreactor after two weeks of culturing.