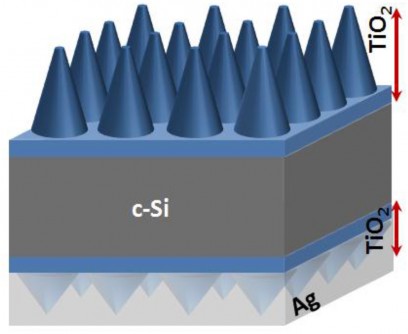 Newswise — Despite a surge in solar cell R&D in recent years involving emerging materials such as organics and perovskites, the solar cell industry continues to favor inorganic crystalline silicon photovoltaics. While thin-film solar cells offer several advantages—including lower manufacturing costs—long-term stability of crystalline silicon solar cells, which are typically thicker, tips the scale in their favor, according to Rana Biswas, a senior scientist at Ames Laboratory, who has been studying solar cell materials and architectures for two decades.

“Crystalline silicon solar cells today account for more than 90 percent of all installations worldwide,” said Biswas, co-author of a new study that used supercomputers at Berkeley Lab’s National Energy Research Scientific Computing Center (NERSC), a Department of Energy Office of Science User Facility, to evaluate a novel approach for creating more energy-efficient ultra-thin crystalline silicon solar cells. “The industry is very skeptical that any other material could be as stable as silicon.”

Thin-film solar cells typically fabricated from semiconductor materials such as amorphous silicon are only a micron thick. While this makes them less expensive to manufacture than crystalline silicon solar cells, which are around 180 microns thick, it also makes them less efficient—12 to 14 percent energy conversion, versus nearly 25 percent for silicon solar cells (which translates into 15-21 percent for large area panels, depending on the size). This is because if the wavelength of incoming light is longer than the solar cell is thick, the light won’t be absorbed.Nanocone Arrays

This challenge prompted Biswas and colleagues at Ames to look for ways to improve ultra-thin silicon cell architectures and efficiencies. In a paper published in Nanomaterials, they describe their efforts to develop a highly absorbing ultra-thin crystalline silicon solar cell architecture with enhanced light trapping capabilities.

“We were able to design a solar cell with a very thin amount of silicon that could still provide high performance, almost as high performance as the thick silicon being used today,” Biswas said.

The key lies in the wavelength of light that is trapped and the nanocone arrays used to trap it. Their proposed solar architecture comprises thin flat spacer titanium dioxide layers on the front and rear surfaces of silicon, nanocone gratings on both sides with optimized pitch and height and rear cones surrounded by a metallic reflector made of silver. They then set up a scattering matrix code to simulate light passing through the different layers and study how the light is reflected and transmitted at different wavelengths by each layer.

“This is a light-trapping approach that keeps the light, especially the red and long-wavelength infrared light, trapped within the crystalline silicon cell,” Biswas explained. “We did something similar to this with our amorphous silicon cells, but crystalline behaves a little differently.”

For example, it is critical not to affect the crystalline silicon wafer—the interface of the wafer—in any way, he emphasized. “You want the interface to be completely flat to begin with, then work around that when building the solar cell,” he said. “If you try to pattern it in some way, it will introduce a lot of defects at the interface, which are not good for solar cells. So our approach ensures we don’t disturb that in any way.”Homegrown Code

In addition to the cell’s unique architecture, the simulations the researchers ran on NERSC’s Edison system utilized “homegrown” code developed at Ames to model the light via the cell’s electric and magnetic fields—a “classical physics approach,” Biswas noted. This allowed them to test multiple wavelengths to determine which was most optimum for light trapping. To optimize the absorption of light by the crystalline silicon based upon the wavelength, the team sent light waves of different wavelengths into a designed solar cell and then calculated the absorption of light in that solar cell’s architecture. The Ames researchers had previously studied the trapping of light in other thin film solar cells made of organic and amorphous silicon in previous studies.

“One very nice thing about NERSC is that once you set up the problem for light, you can actually send each incoming light wavelength to a different processor (in the supercomputer),” Biswas said. “We were typically using 128 or 256 wavelengths and could send each of them to a separate processor.”

Looking ahead, given that this research is focused on crystalline silicon solar cells, this new design could make its way into the commercial sector in the not-too-distant future—although manufacturing scalability could pose some initial challenges, Biswas noted.

“It is possible to do this in a rather inexpensive way using soft lithography or nanoimprint lithography processes,” he said. “It is not that much work, but you need to set up a template or a master to do that. In terms of real-world applications, these panels are quite large, so that is a challenge to do something like this over such a large area. But we are working with some groups that have the ability to do roll to roll processing, which would be something they could get into more easily.”

About Computing Sciences at Berkeley Lab

ESnet, the Energy Sciences Network, provides the high-bandwidth, reliable connections that link scientists at 40 DOE research sites to each other and to experimental facilities and supercomputing centers around the country. The National Energy Research Scientific Computing Center (NERSC) powers the discoveries of 6,000 scientists at national laboratories and universities, including those at Berkeley Lab's Computational Research Division (CRD). CRD conducts research and development in mathematical modeling and simulation, algorithm design, data storage, management and analysis, computer system architecture and high-performance software implementation. NERSC and ESnet are DOE Office of Science User Facilities.

Lawrence Berkeley National Laboratory addresses the world's most urgent scientific challenges by advancing sustainable energy, protecting human health, creating new materials, and revealing the origin and fate of the universe. Founded in 1931, Berkeley Lab's scientific expertise has been recognized with 13 Nobel prizes. The University of California manages Berkeley Lab for the DOE’s Office of Science. DOE’s Office of Science is the single largest supporter of basic research in the physical sciences in the United States, and is working to address some of the most pressing challenges of our time. For more information, please visit science.energy.gov.