Metabolic functions of microbial communities vary during a geyser eruption 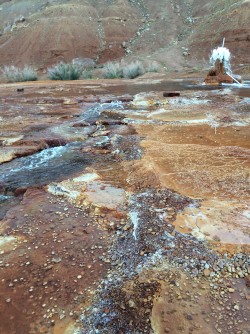 Crystal Geyser during its “major eruption” period, where sufficient discharge is produced to cause overland flow to the Green River.

Newswise — Deep underground, the earth beneath our feet is teeming with microbial life, the majority of which has yet to be characterized. Cut off from sunlight, these enigmatic organisms must obtain life-sustaining energy and carbon, which all living cells need, through other means.

A pressing question in subsurface microbiology is how these organisms, and their capacities for carbon, nitrogen and sulfur cycling, are distributed along vertical transects underground. In marine or freshwater aquatic systems, sampling microbial communities along depth gradients is fairly straightforward. But for the terrestrial subsurface, it’s difficult to obtain samples without contamination from drilling fluids or equipment.

In collaboration with a team led by longtime collaborator Jill Banfield of the University of California, Berkeley and Cathy Ryan of the University of Calgary in Canada, researchers at the U.S. Department of Energy (DOE) Joint Genome Institute (JGI), a DOE Office of Science User Facility, investigated samples collected at Crystal Geyser over one of the Utah geyser’s complex, five-day eruption cycles. Genome-resolved metagenomics, single-cell genomics, and geochemical analyses were integrated to show that samples taken during each phase contain microbial communities that are distinctive in terms of both composition and metabolic function. The results were reported January 29, 2018 in Nature Microbiology.

Banfield noted that the key achievement, in her view, is that cultivation-independent genomic methods directly linked highly novel groups of organisms to their sources below ground. This was possible due to the unprecedented combination of genomics methods with geochemistry and hydrological information. She also noted that it is important that major methods in microbial ecology, genome-resolved metagenomics and single cell genomics, were applied to the same samples so that these key methods could be compared.

Located in Paradox Basin, Utah, Crystal Geyser is a CO2-driven, cold-water geyser fed by a series of underlying aquifers separated by layers of shale and mudstone. Its five-day eruption cycle has three phases—minor eruptions, major eruptions, and recovery. In each eruption phase, the microbial communities sampled were sourced from groundwater at different depth intervals.

“For microbiology and geochemistry, it’s a really cool system because through its cycle the geyser feeds off these different aquifers and through these eruptions you can get access to the stratified system and the microbes that come up,” said JGI Microbial Program head Tanja Woyke.

Prior work by Banfield’s group hinted at the enormous phylogenetic diversity of previously unknown bacteria and archaea in this system, including deeply branching organisms of the Candidate Phyla Radiation (CPR) and the DPANN superphylum of extremophile archaea named for the first five groups discovered: Diapherotrites, Parvarchaeota, Aenigmarchaeota, Nanoarchaeota, and Nanohaloarchaea.

"Crystal Geyser provides a unique setting in which to investigate the subsurface, and combining our hydrogeochemical and microbiological datasets led to some fascinating insights about what's going on down there," said Bethany Ladd, the study’s co-first author and Ryan’s graduate student

“Ecosystems in the deep terrestrial subsurface represent the final frontier in the exploration of the diversity of life on our planet. Little is known about how these ecosystems are structured and how organisms in these environments make their living without sunlight,” said study co-first author Alexander Probst, a former postdoctoral researcher in Banfield’s lab who is now at the University of Duisburg-Essen in Germany.

In the current study, genomes were reconstructed for 505 different bacterial and archaeal organisms from 104 different phylum-level lineages, including nine potentially novel phyla. Approximately 57 percent of the organisms were significantly enriched in a specific phase of the geyser’s eruption cycle, and thus could be sourced to a particular groundwater depth interval.

The shallow groundwater community was comprised primarily of one Sulfurimonas species, with a handful of other bacteria and a few archaea. The majority of the microbes in the intermediate depths and associated with the geyser itself belonged to the CPR, but the most abundant was a member of Gallionellaceae. And the deepest groundwater had the greatest concentration of DPANN archaea and Candidatus “Altiarchaeum,” a remarkable archaeon with miniature grappling hooks over its cell surface.

How these huge networks function together

Many of these subsurface-dwelling microbes are presumed to be symbiotic, the idea being that the dearth of resources available from the environment means that they have to rely more on one another to survive. Organisms that are able to generate energy through chemical reactions (such as hydrogen or iron oxidation) and then use that energy to build up carbon are considered “primary producers” that sustain the other bacteria and archaea in their communities.

“It was both an honor and a pleasure to work with the Berkeley team over long days and long nights in a very special part of the world,” noted University of Calgary’s Ryan, whose graduate student Bethany Ladd was co-first author on the study.

Moreover, noted Probst, the analysis identified genomes of hundreds of putative symbiotic organisms, including a potential symbiont of one the most abundant organisms in these subsurface fluids, an archaeon that binds CO2 in the subsurface and converts it to organic matter.

“Now that we have these kinds of big datasets we can start trying to disentangle how these huge networks function together,” Woyke said.

Additional JGI researchers who contributed to the project include: Jessica Jarett, a postdoctoral fellow in Woyke’s lab, who helped generate and analyze single cell genomes; Rex Malmstrom, a research scientist/engineer, who assisted in the generation of single cell genomes; and Christian Sieber, a former postdoctoral fellow co-appointed at UC Berkeley, provided software.

Alexander Probst was supported by the German Science Foundation and by Lawrence Berkeley National Laboratory’s Sustainable Systems Scientific Focus Area funded by the US Department of Energy, Office of Science. Work at UC Berkeley was funded by the Sloan Foundation “Deep Life” grant. Funding for hydrogeological and geochemical analyses was provided by a Natural Sciences and Engineering Research Council of Canada Discovery Grant to Cathy Ryan.