Successful demonstration paves the way for unprecedented applications in science, industry, and medicine 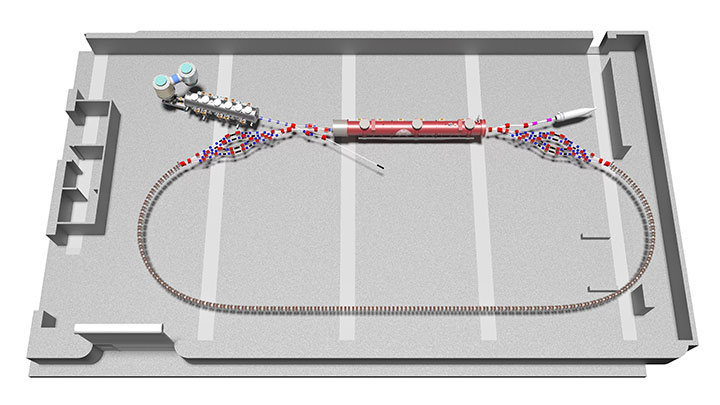 Schematic of the Cornell-BNL ERL Test Accelerator. Superconducting radiofrequency (SRF) cavities accelerate electrons to high energy in stages, sending them around the racetrack-shaped accelerator after each acceleration stage. Each curved arc is made of a series of fixed field, alternating gradient (FFA) permanent magnets that can carry beams at multiple energies simultaneously. After four passes through the accelerating infrastructure and FFA arcs, the electrons then decelerate in stages, returning their energy to the SRF cavities so it can be used to accelerate electrons again

Newswise — ITHACA, NY—Scientists from Cornell University and the U.S. Department of Energy’s (DOE) Brookhaven National Laboratory (BNL) have successfully demonstrated the world’s first capture and reuse of energy in a multi-turn particle accelerator, where electrons are accelerated and decelerated in multiple stages and transported at different energies through a single beamline. This advance paves the way for ultra-bright particle accelerators that use far less energy than today’s machines.

Applications include medical isotope production, cancer therapy, x-ray sources, and industrial applications such as micro-chip production, as well as more energy-efficient machines for basic research in physics, materials science, and many other fields. One example: Scientists may use such energy-recovery accelerator technology to efficiently generate electrons for “cooling” ions at the Electron-Ion Collider, a planned groundbreaking nuclear physics research facility that will be located at Brookhaven Lab.

The Cornell-BNL ERL Test Accelerator, or CBETA, located at Cornell, is an Energy Recovery Linear accelerator (ERL) that uses two transformational “green” technologies: Instead of dumping the energy of previously accelerated particles, it recovers and reuses that energy to accelerate the next batch of particles. And the beamline that steers the particles through the accelerator is made of permanent magnets, which require no electricity to operate. These are expected to become the most energy-efficient technologies for high-performance accelerators of the future.

“Reusing a particle beam’s energy in this new kind of accelerator makes brighter beams available, which would have required too much energy until now,” said Georg Hoffstaetter, physics professor and principle investigator for Cornell. In addition to the above-mentioned applications, Hoffstaetter points out that “such innovative technology and these brighter beams will likely lead to additional uses yet to be imagined.”

CBETA’s construction was funded by the New York State Energy Research and Development Authority (NYSERDA) and used components that were developed with funds from the National Science Foundation (NSF) and industrial partners. The CBETA team achieved the key milestone of full energy recovery and reacceleration of particles in the early hours of December 24, 2019, on schedule. Since then, the team has continued to enhance CBETA’s performance.

Alicia Barton, President and CEO, NYSERDA, said, “NYSERDA is extremely proud to support this groundbreaking project and we look forward to seeing how it advances our ability to address the most pressing scientific and societal challenges of our time. New York’s support for technologies that deliver economy-wide benefits is unwavering under Governor Cuomo’s leadership and we congratulate our partners on this tremendous milestone.”

The CBETA machine includes the world’s first eight-pass superconducting Energy-Recovery Linear accelerator, in which a beam is accelerated by passing four times through a Superconducting Radio Frequency (SRF) cavity to reach its highest energy. By making another four passes through the same cavity, but this time decelerating, the beam’s energy is captured and made available for new particles to be accelerated.  This ERL concept was first proposed in 1965 by Maury Tigner, professor emeritus at Cornell University, but it took decades of work at Cornell and elsewhere to develop the necessary technology.

After each pass through the acceleration apparatus, the particles have a different energy and traverse their own “lane” through a special chain of magnets, referred to as Fixed-Field-Alternating Linear Gradient (FFA-LG) beamline, which loops the particles back to the SRF cavities. The permanent magnets that make up this beamline were designed, developed, and precisely shaped at Brookhaven to allow all beams to traverse the same magnet structure, even though they have four different energies. This design reduces the need for multiple accelerator rings to accommodate beams at different energies and eliminates the need for electricity to power the magnets, further reducing cost and improving overall efficiency.

Dejan Trbojevic, senior physicist and principal investigator for Brookhaven’s participation in the project, first described the idea of accelerating beams at multiple energies in a single beamline made of fixed-field alternating-gradient magnets at a muon collider workshop in 1999. Meanwhile, Cornell was developing components for a superconducting ERL.

“With CBETA, the idea was to show that Brookhaven’s single-beamline return loop would work with Cornell’s ERL technology for the acceleration of electrons, particles with many more potential applications than their heavier muon cousins,” Trbojevic said.

In late December, with Cornell physicist Adam Bartnik as the lead operator, CBETA did just that. Starting with an electron beam at the energy of six million electron volts (MeV), the accelerator components brought the particles to 42, 78, 114, and 150 MeV in four passes through the ERL. After deceleration during four additional passes through the SRF cavities, the particles reached their original 6 MeV energy—at exactly the same position as the starting beam. This showed that full electron energy recovery had been achieved, and that the SRF cavities were energized to accelerate the next batch of particles.

This accomplishment makes CBETA the first multi-turn ERL to recover the energy of accelerated particle beams in SRF accelerating structures, and the first accelerator to use a single beamline with fixed magnetic fields to transport seven different accelerating and decelerating energy beams.

“We couldn’t have achieved these results without many contributions throughout the design, construction, and commissioning phases by scientists, engineers, and technical staff at both Brookhaven and Cornell, along with input from many industrial partners and renowned accelerator experts,” said Brookhaven Lab engineer Rob Michnoff, director of the CBETA project.

Cornell University is a private research university that provides an exceptional education for undergraduates and graduate and professional students. The Cornell Laboratory for Accelerator-based ScienceS & Education, CLASSE, innovates in the areas of beams and particle accelerators,  photon science, and the early universe. For more information, visit https://www.classe.cornell.edu and https://www.classe.cornell.edu/Research/ERL/CBETA.html

Caption: Schematic of the Cornell-BNL ERL Test Accelerator. Superconducting radiofrequency (SRF) cavities accelerate electrons to high energy in stages, sending them around the racetrack-shaped accelerator after each acceleration stage. Each curved arc is made of a series of fixed field, alternating gradient (FFA) permanent magnets that can carry beams at multiple energies simultaneously. After four passes through the accelerating infrastructure and FFA arcs, the electrons then decelerate in stages, returning their energy to the SRF cavities so it can be used to accelerate electrons again